END OF A GENERATION

And I think it happened a while ago.

I think the leap from 8-bit to 16-bit was amazing, and 16-bit to PlayStation/Nintendo 64 was remarkable. The subsequent leaps from fuzzy pixels to smooth if less-than-lifelike graphics – PS1/N64 to PS2/Xbox, followed by PS2/Xbox to PS3/Xbox 360 – were each impressive in their own way. (Nintendo, which has been off in its own little oddball world of kid-friendly motion controllers for a while now, will not feature heavily in this review.)

But PS3 to PS4? I’m not sure your average Joe or Jill Public could spot the difference.

As for last generation’s PS4 to today’s PS5? Without my critic’s eye and Sony’s aggressive technobabble marketing, I don’t think Joe or Jill would even understand the distinction anymore.

By all means, my creaky and overheating seven-year-old PS4 was due for an upgrade. But the PS5 just doesn’t – can’t – deliver the mind-blowing experience that I felt the first time I picked up a DualShock. And I don’t think any console generation will ever do that again. If anything, and as I’ve written elsewhere, you have to turn to Virtual Reality for that.

As for the PS5, it’s a system that does everything you want it to – it’s faster, prettier, it has cooler new games – but not much more than that.

To borrow from Pete Townshend: meet the new gen, same as the old gen.

AND THE DAWN OF A NEW ONE

Let’s get this out of the way: the PS5 is an absolute powerhouse of a home video game console. Whether you purchase the “core” version – at CAD$629.99, it comes with a built-in 4K Blu-ray player, which reads PS5 as well as PS4 discs – or the disc-free “digital edition” (CAD$499.99), it’s big, fast, shiny, and the games look and play amazing. I haven’t gotten my hands on the extremely confusingly named Xbox Series X/S, but I imagine over in Microsoft-land it’s much the same. Faster than ever, prettier graphics, exciting new sequels. Presumably the water and reflection effects are out of this world (though isn’t that always the case with every new game console?).

If you’ll allow me to get technical about it, the PS5 really is fast: it uses a Solid-State Drive (SSD) that gets you from the power-on button to gameplay within the space of about 30 seconds, a bit longer with some of the bigger games. It’s got 16GB GDDR6 memory compared to the PS4’s 8GB GDDR5. The resolution maxes out at 8K (if you own an 8K TV, of course), compared to the 1080p PS4 . Its GPU delivers up to 10.3 Teraflops vs. 1.84 Teraflops on the PS4. Do I know what a Teraflop is? No. Is it cool that the PS5 has almost ten times more Teraflops than its predecessor? Sure, why not. 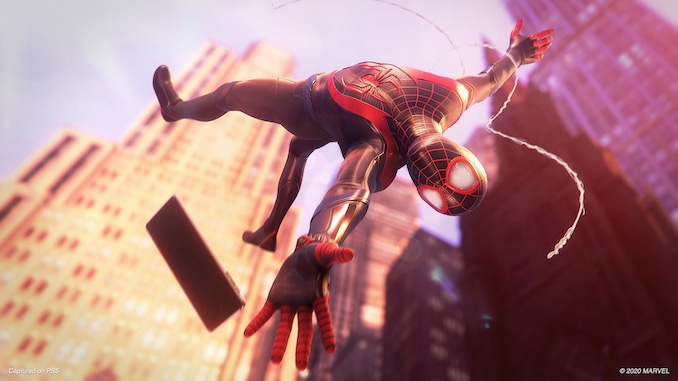 A DISTINCTION WITHOUT A DIFFERENCE

The question is: to what end?

The PS5 launches with a murderers’ row of AA to AAA titles, vastly more impressive than the Xbox X/S launch lineup and, frankly, much more promising than anything Microsoft currently has on its schedule.

That said, most of the PS5 launch and near-launch titles are either upscales of PS4 games (or older, as in the case of PS3 remake Demon’s Souls), or are releasing simultaneously on PS4 and PS5. That’s as true for the new Viking-themed Assassin’s Creed game as it is for Spider-Man: Miles Morales and for the hotly anticipated new entry in the tentpole Horizon Zero Dawn series – those are all coming to PS4 as well. I’ve had a great time with (and will be running reviews on) launch titles like the “greatest-hits” edition of Overcooked, rally racer DIRT5, and Abzu quasi-sequel The Pathless – but those are all games available on PS4 in one form or another.

In terms of PS5 exclusive-exclusives, launch day brings us a new Sackboy game and glorified tech demo Astro’s Playroom, but not much more. Further down the line, we can look forward to a new Gran Turismo and the latest God of War, while Shinji Mikami’s Ghostwire: Tokyo and Square-Enix’s Final Fantasy XVI will be PS5 console-exclusives, though they will also release on PC. 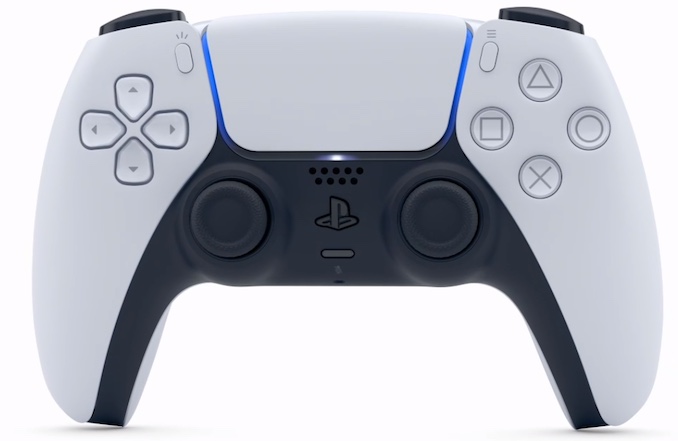 Though I may shrug at the launch-day PS5 lineup, I’ll admit that the PlayStation library has always been more interesting and more diverse than the Xbox’s, thanks to Sony’s robust presence (and absolute market dominance) in non-North American markets. Microsoft, much as it might cough up a Halo or a Gears of War every once in a while, simply can’t compete with the diversity of Japanese or European studios making games for Sony and Sony alone. It’s clear we can expect more PS5 exclusives – and, more importantly, more weird, indie exclusives – as the PS4 shuffles off its technological coil.

In the meantime, the PS5 is fully backwards compatible with the PS4, meaning you have full access to all digital PS4 games you already own, and can insert your PS4 discs if you own the “core” PS5. Even better, PS4 games are optimized on PS5: they run faster, the graphics are better, the motion smoother. Two of my favourite games of the past year, Jaws simulator Maneater, and samurai/ninja simulator Ghost of Tsushima, are both getting PS5 up-ports. I’ve already spent time in Tsushima, and it truly looks stunning in PS5 4K at 60fps, having benefited from what Sony is calling the “Game Boost” program for PS4 titles.

No doubt about it: once you own a PS5, your PS4 is completely redundant.

Happily, all PS4 multiplayer is also fully operational on PS5: insert your Tsushima PS4 disc, and you can hop right online with your friends playing on PS4. Not only that, but most PS5 multiplayer games also feature crossplay, meaning you can log into, say, your PS5 edition of DIRT5 and play against someone on a PS4. It’s a nice and welcome touch, and I’ve already used it to hop online with my PS4-owning friends. 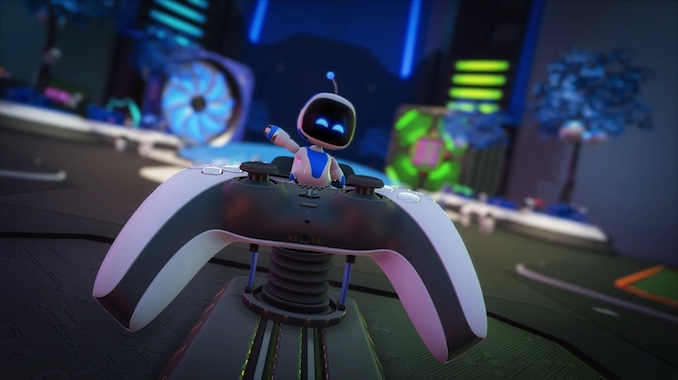 Astro reminds me a lot of the “First Steps” demo that comes built in with the Oculus Quest. Not only because it features a cutesy Wall-E-derivative robot, but because it’s designed to showcase all the things you can do with your brand-spanking new electronic toy.

On that front, Astro delivers. At every twist and turn and rumble, Astro does an excellent job of showcasing all the unique abilities of the PS5’s remodelled DualSense controller. The controller, which looks like the classic DualShock’s more refined cousin, has some neat features, including a much-vaunted haptic feedback system, dynamic adaptive triggers, and a built-in microphone. In Astro, you’ll get a feel for all of them: the granular not-quite-rumbling as you shatter a glass window (that’s “haptic feedback”), the resistance as you pull back the “adaptive” R2 trigger to shoot an arrow, and the absolute ridiculousness of shouting a stream of profanities at your controller in order to blow an object across screen. (Okay, technically, you only need to blow into the built-in microphone, but where’s the fun in that?) As gimmicks go, they go well, and I look forward to other games taking more or less advantage of the DualSense depending on the vision of the developer.

Amusingly, Astro also doubles as a nostalgia-laden trip through PlayStation history, with levels made out of hardware parts and background characters posed in homage to PlayStation classics like Metal Gear Solid or Final Fantasy VII. It may look and play like a 3D Super Mario game, but it works really well as a celebration of all things Sony.

However, this does bring with it two major problems: 1) Surely Sony could have come up with something more exciting for its next-gen showcase than a Super Mario 64-style platformer, and 2) Astro is just too darn difficult for neophytes.

Astro dies after one hit. Astro demands close-to-pixel-perfect-platforming. Astro’s enemies are big and quick and aggressive. There are sections of Astro’s Playroom, in particular when Astro hops into one of the game’s handful of transforming vehicles, that remind me of the hardest parts of Donkey Kong Country. That’s a big no-no for the game that’s supposed to introduce your system to the world.

Look, Sony and Microsoft have always had this problem: despite sporadic attempts at broadening their audience, it’s obvious the PlayStation and Xbox are geared towards “Real Gamers”, a phrase that I actively dislike but which is very popular on Reddit. Astro’s Playroom is clearly designed with “Real Gamers” in mind, and though it looks cute and it’s super cool that you can blow into the controller, it’s not going to bring Nintendo-type gamers in.

Put another way, Astro’s Playroom fails the “Mom Test”: my mom could not survive more than a minute in Astro, and my mom is never going to be interested in a PS5. 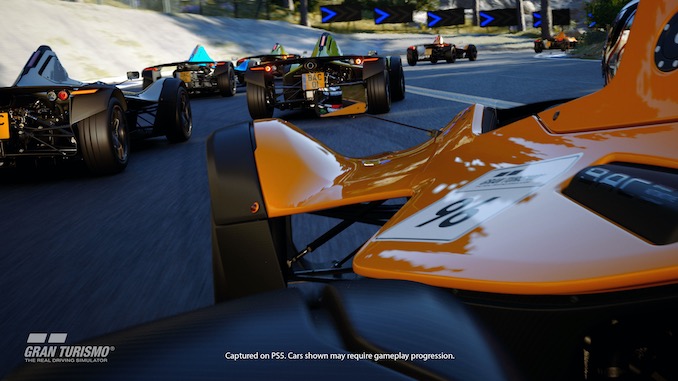 The original PlayStation launched with needlessly confusing ad slogan U R Not E, with the “E” stylized in the colour red, signifying “red-e”, as in, “ready”. As annoying as that campaign was, it did capture a fairly accurate sentiment. In 1996, we simply were not ready for the technological marvel that was the PS1 (or N64, for that matter). Even in 2020, there’s a strong argument to be made that the PS1 is the best video game console ever. Leaps and bounds better than what had come before, and home to some of the best and most important video games ever made. There’s a reason why so many PS1 remakes have found their way to the PS4, and it’s not just nostalgia.

In comparison, the PS5 arrives with a consumer base very much ready for what the system has to offer. It’s fast enough to finally do away with the annoyance of load times. It’s beautiful enough to render the reflections in a New York City skyscraper flawlessly, no matter how fast Spider-Man swings by. It rather courageously continues to support the PSVR, in the face of some very stiff VR competition. It gives us what we want, when we want it, and how we want it.

And I think it’s telling that the best PS5 launch games have released alongside nearly indistinguishable PS4 ports. It’s as if Sony took the guts of a PS4, bulked it up with some techno-steroids, and wrapped the whole thing in a white clamshell and called it a day. The PS5 is fast, and I’m sure the new Gran Turismo will be absolutely incredible, though I’m sad that we’ll never get another Kojima Metal Gear, which was the sole reason I bought my PS2, PS3, and PS4. Fact is, the days of mindblowing technological leaps are over.

You are E, indeed.

Visit the official page for the PlayStation 5 here.

Dead Space 3 and the Toronto Artist Behind It

The third instalment of EA games horror third-person-shooter Dead Space came out earlier this month when Dead Space 3 was released. The game was made in […]

If there’s one thing to know about Toronto, it’s that we love our basketball. The Raptors had quite the season […]