Our review of Ghost of Tsushima, developed by Sucker Punch Productions. Available now for PS4.

An open-world samurai adventure game in the vein of Assassin’s Creed or Red Dead Redemption.

It is the video game I have waited my whole life to play.

Japanophiles, adventurers, people who own a PS4.

Ghost of Tsushima, the thrilling new open-world adventure game set in feudal Japan, is the game I might have made: a tribute to the classics of Japanese cinema, as conceived by a North American team that grew up on a steady diet of samurai and ninja stories.

Putting players in the waraji (shoes) of a 13th century samurai, Tsushima pits protagonist Lord Jin Sakai against invading hordes of Mongols that have overrun his native Tsushima Island. It’s a game that puts a katana in your hands and a horse at your beck and call, and invites you to slice and dice your way towards liberating villages, taking down enemy strongholds, and generally living out the samurai fantasy. It’s also a game that lets you do the samurai dash – that no-look single stroke takedown; you know the one I’m talking about.

And, most importantly: it is one of the most visually stunning video games ever made.

At the heart of Ghost of Tsushima lies a certain tension. It’s not, as the trailers might suggest, that between the Japanese inhabitants of Tsushima island and the game’s Mongol villains. Rather, it’s the tension between the honour code of the samurai – at least, as popularly conceived in Japanese cinema and especially in the works of Akira Kurosawa – and the decidedly dishonourable tactics embraced by the game’s protagonist, Jin Sakai.

From a narrative standpoint, this is interesting. It complicates the story by putting Jin consistently at odds with his uncle, Lord Shimura, a man who insists on fighting by the book even as the Mongols pillage and loot and massacre.

From a gameplay standpoint, however, it’s painfully obvious that developers Sucker Punch really wanted to make a ninja video game, but settled on the hybrid presented here.

That said, this fusion of genres mostly works well. The combat (“samurai”) and stealth (“ghost”) play styles are equally fun, and the ease with which you can switch between them means you rarely feel beholden to one over the other.

Half the time, you’re engaged in thrilling open combat, dodging and parrying attacks, shifting strategies and stances on the fly. The samurai combat is fluid, intuitive, and tactical, and does a great job of making you feel like a Japanese warrior. I especially love the capital-D Duels, which are universally excellent: during these one-on-one sword battles, the camera zooms in at a more cinematic angle, the game strips you of all your gadgets, and the only path to victory is through patience, reflexes, and very careful timing. It’s been a long time since Bushido Blade; if Sucker Punch made Tsushima’s Duels two-player they’d have the fighting game of the year on their hands.

And then there’s the other half of the game, during which you’re sneaking in the shadows, stabbing foes in the back, dashing across rooftops. During these sequences, Jin swings from grappling hooks, distracts with wind chimes, and throws smoke bombs, kunai, and poison darts. These, dear friends, are not the tools of a samurai.

And it’s here where we find a real disconnect between what the story – i.e., the cutscenes – tries to say about Lord Jin’s dishonour, and what’s available, even encouraged, through gameplay. Poison these Mongols and watch them vomit blood. Slit the throats of these sleeping enemies. Sneak through this fortress and avoid combat at all. These are tactics that, frankly, even the most fallen rōnin might be ashamed of, and yet Tsushima not only lacks in-game consequences for relying on them, it regularly rewards you for doing so.

Tsushima bills itself as inspired by Akira Kurosawa – there’s even a “Kurosawa” filter that switches the game to grainy black and white – but it owes just as much, if not more, to the legendary manga and “B” samurai flicks of the 1970s, like Zatōichi and Lone Wolf and Cub. The latter is a particular inspiration: from the Goseki Kojima-inspired art style of the animated story sequences, to the protagonist’s elemental combat stances – Stone Stance, Water Stance, etc. – down to the ludicrously lopsided battles, in which Jin battles dozens if not hundreds of enemies at the same time; all this comes straight out of the Lone Wolf‘s playbook.

Speaking of wolves, this game is bursting with animal life. There are foxes who happily lead you to hidden shrines, and golden birds that swoop low when there are secrets nearby. There are bears and boars to hunt, and Mongolian hunting dogs to evade. Not all animals have a gameplay purpose, either: the hopping frogs, dancing butterflies, and herds of deer are all here simply to be admired for their beauty – and for how lifelike they are. 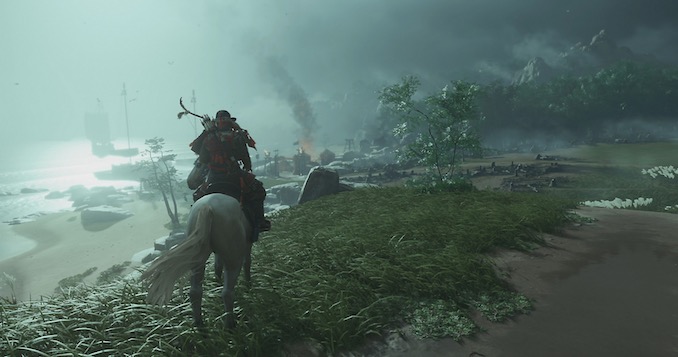 Usually, when we talk about the uncanny valley, we’re referring to those computer-animated characters that look almost human, but not quite; unsettling faces that fall in the liminal space between real and artificial. Tsushima, on the other hand, might best be described as a landscape of uncanny valleys – and uncanny mountains, and rivers, and forests, and meadows, and so much more. At times, Ghost of Tsushima is almost too beautiful, too real: every tree is too lush, the flowers too colourful, the billowing snow so perfect. You may even find yourself wishing for something beige and bland to break up this beauteous monotony, but not really: Tsushima is probably the most photorealistic video game I’ve ever played.

In between all the bloodshed and the technicolour dreamscapes, Tsushima also finds time for slowness, even subtlety. I love the more contemplative, combat-free missions, like the one that asks you to accompany an elderly woman as she reminisces about her life, or the multiple opportunities you are given to sit down, enjoy the view, and compose a haiku (never mind that the form did not exist at the time Tsushima takes place).

I also love how the wind always blows in the direction of your next objective, negating the need for an on-screen indicator. Indeed, the in-game HUD rarely appears at all, and then only briefly. Most of the time, you could be mistaken for watching a high-end CGI movie. On that note, I also respect the admirable commitment to the cinematic experience: not a single cutscene can be skipped, and not once did I find myself bored.

The real historical tradition of the samurai is not as simplistic as what’s on view here, and already critics have attacked Tsushima for failing to grapple with the complicated (and nationalistic) legacy of samurai fiction. I think some of these criticisms are merited – indeed, Kurosawa himself understood the thuggishness and self-interest of samurai; look no further than the Macbeth-like central figure in Throne of Blood – but really, if you’re expecting historical fidelity from a self-described samurai fantasy, you’re missing the point.

Like Red Dead Redemption‘s Wild West before it, Tsushima is explicitly a recreation of a recreation; a virtual playground based on a cinematic one. Anyway, the Japanese themselves don’t seem to mind: earlier this year, Ghost of Tsushima became only the third Western-made video game to ever earn a perfect 40/40 score from prestigious gaming magazine Famitsu.

I won’t be quite so generous with my scoring. For one thing, I simply can’t get over the fact that this game has Japanese voice acting set to English lip animation, giving it a kind of reverse-Godzilla dubbing effect. For another, the nature of the repetitive side quests – follow this obvious set of footprints, assassinate that number of Mongols – wears thin.

For these weaknesses and a few others, I must deduct a point, awarding Ghost of Tsushima a total of 9 Toshiro Mifunes out of 10. My critics’ code of honour would not permit otherwise.

[disappears in puff of smoke]

Visit the official page for Ghost of Tsushima here.

Our review of Detroit: Become Human, developed by Quantic Dream. Released on May 25, 2018 for PlayStation 4. WHAT IS […]