Our updated review of the Oculus Quest. Originally reviewed by Toronto Guardian on December 19, 2019. 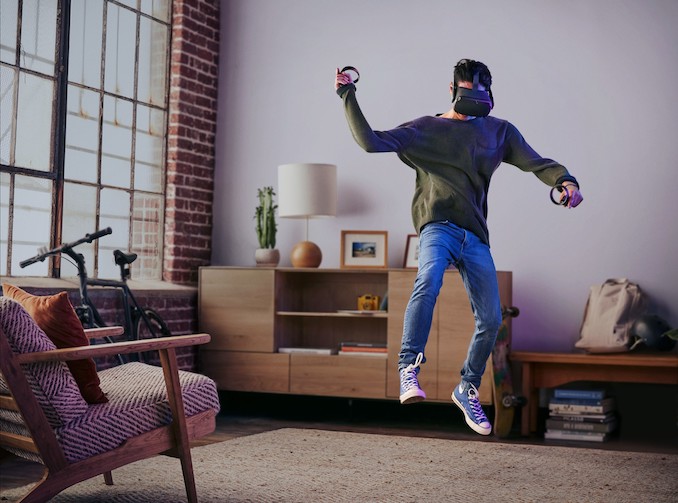 We’ve had just shy of a year with the Oculus Quest, the Facebook-owned virtual reality device that remains at the leading edge of what VR can do. A lot can change in a year, not least the prospect that we would all wind up cooped up at home, desperate for any kind of escape from real reality.

One year in, the Oculus Quest is as impressive as ever. The wireless setup alone makes it the most accessible VR device to date – I cannot emphasize enough how wonderful it is to not have any cables to trip over – but the impressive graphical capabilities and intuitive controls seal the deal.

Now, with the recent announcement of the Oculus Quest 2, we thought it a nice opportunity to take a look back at our lockdown year with the O.G. Quest.

ALL ABOARD THE ZUCKERBERG EXPRESS

As of January 1, 2023, it will be mandatory to log in to your headset via a Facebook account. It’s a minor annoyance at best, but all too indicative of Mark Zuckerberg’s quest (no pun intended) to control all aspects of our world and, um, any alternative ones as well. Facebook is in our phones (WhatsApp, Instagram, Facebook Messenger), on our computers, in our GIFs (fun fact: Facebook owns GIPHY), and in our heads – in addition to the Oculus brand, Zuck recently acquired respected gaming studio Ready at Dawn.

If there comes a day when my virtual lightsaber battles are interrupted by Facebook pokes or Instagram ads, my head may indeed explode, Scanners-style. But that day is not yet here, so for now the fact that virtual reality is now owned by Facebook – and make no mistake, the Oculus is far and away the best VR ecosystem – is worrisome, but not damning.

Anyway, the apps and games are a blast. Speaking of…

When I first talked up the Quest, I heralded a handful of the keynote titles: Superhot, Beat Saber, the better non-gaming apps like International Space Station. Having had some more time with the system, I can speak to what works best, and what does not, in the Quest’s ever-growing library.

The best: gimmicks. Truth is, VR works best when it’s “tricking” you, and often the best tricks are those that offer an added degree of immersion. Take Richie’s Plank Experience: you walk into an elevator, “ride” to the top of a skyscraper, and step out onto a ledge. It’s very realistic, and can be made even better by putting an actual physical plank on the floor, which the Quest will “map” into the virtual space. I have seen many people walk the plank, and at least some of them have screamed when they fell.

The worst: cheap horror. There are a plethora of spooky titles for the Quest, and most run the gamut from cheap jump scare to cheaper jump scare. Sorry, but having haunted house-style giant spiders “leap” at you gets old pretty quickly, and lazy on-rails controls only make these games worse. Give me a VR Fatal Frame, darn it!

The best: non-gaming apps. There are still far too few of them, but I’m all for non-gaming/non-competitive apps like the artsy Tilt Brush, the Quest’s built-in tutorial First Steps (which is surprisingly good for a glorified demo), and the Google Street View-like Wander. Still, you’d think that in 2020 of all years we would finally have that virtual sightseeing app we’ve been craving.

The indifferent: Oculus made a big deal out of its hand-tracking update what feels like several lifetimes ago in early 2020, but so far it’s hard to get excited. Sure, you can navigate the main menu by waving your hands in the air, Xbox Kinect-style. Plus, there are a few games – though not the obvious ones like Superhot – where you can play without controllers. It’s neat, it works decently, but I have yet to see anyone really make killer use out of it.

The best: so, there’s this charming Twitter feed called Can You Pet the Dog, solely devoted to documenting video games where you can pet dogs, cats, and other animals. I mention this because you can indeed pet the mouse in Moss, an action-adventure title for the Oculus Quest. In Moss, you play as an invisible god-like creature looking down upon an anthropomorphic mouse as it traverses a Tolkienesque world. The first moment you lean down and scritch its little head is the best moment in an otherwise fantastic game.

The worst: climbing. I was stoked for The Climb, a rock-climbing simulator set across a diverse array of natural environments. Unfortunately, climbing on the Quest – not just in The Climb, but in other games like Vader Immortal – just does not work well. Reaching up and “pulling” on empty air does not in any way mimic real-world physics. It kind of just feels like you’re dragging an enormous 3D model of a mountain around on screen, while you remain stationary.

The best of the best: see next section.

Ironically, the most fun I’ve had with the Quest so far has been outdoors. Freed from the constraints of an apartment or office, it’s where the system really shines, accommodating play spaces of up to 25 x 25 feet.

In such an expanse, you can truly immerse yourself in my favourite Quest apps, Nature Treks and Ocean Rift. These apps do exactly what they promise, letting you roam a series of beautifully rendered land- and waterscapes. These include a jungle waterfall, an arid African savannah, and (my favourite) a wintry Arctic landscape. There are animals here, and though interaction is limited, it’s still marvellous to dive underwater and come immediately face to face with an ocean sunfish, or load up the “red savannah” and run into an elephant. Nature Treks is the better of the two, if only because it gives you tools to modify the environment: toss a seed and watch a coconut tree sprout up; summon a rainstorm; feed the foxes. In theory, it’s a relaxation app, but there are moments you may find your heart beating fast, your hair standing on end, at the thrill of what you’re seeing and experiencing.

That’s what makes the Quest so special: the ability to leap headfirst into a completely alternate world – a nice alternative to our current one, if you ask me – and get lost in it. But it’s also what points to its particular weakness: the Quest still feels very much like a video game console, a home to video games-as-games, instead of the Holodeck we were promised. Nature Treks and Ocean Rift are my favourite apps on the system – but they’re also anomalies. Most Quest apps still involve shooting or hitting things.

Sometimes, all you want to do is pet the mouse.

Visit the official site for the Oculus Quest here.

Every library has its legends. And I don’t just mean all those dusty, dog-eared copies of Fellowship of the Ring […]