Our review of Guardians of the Galaxy, developed by Eidos Montréal (yay Canada!). Released on October 26, 2021 for PS5 (reviewed), PS4, Xbox X/S, Xbox One, Switch, and PC. 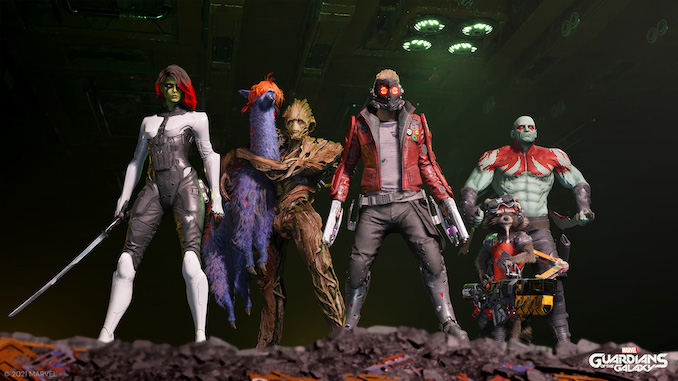 Hail (Hail), what’s the matter with your head,
Yeahhh…

Hail (Hail), what’s the matter with your mind
And your sign and-a, oh-oh-oh

Hail, with it, baby, ’cause you’re fine
And you’re mine, and you look so divine… 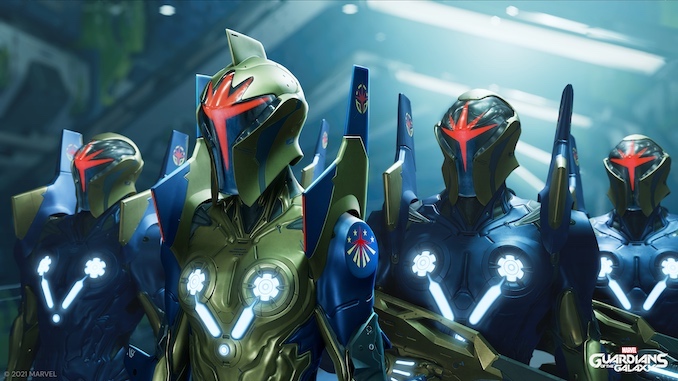 COME AND GET YOUR LOVE

I am the Guardians of the Galaxy hipster.

I was there when they first got together, in the pages of Marvel’s Annihilation: Conquest way back in 2007. I own every issue of the original Abnett-Lanning series. Heck, based on sales figures alone, I’m confident I’m one of the few who read the comic at all. To this day, I can rattle off the core membership from memory: Star-Lord, Gamora, Drax, Rocket Raccoon, Groot, Mantis, Adam Warlock, Phyla-Vell, Moondragon, Major Victory, Jack Flag, and Bug. (Bug is a “Micronaut” who looks like a grasshopper and makes a -tk- sound between words. He’s -tk-ing awesome.) 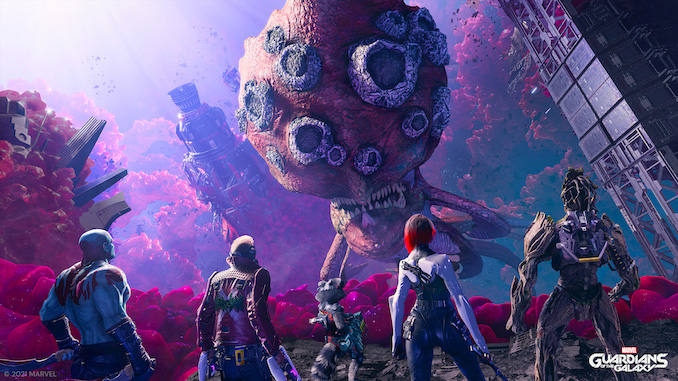 HOOKED ON A FEELING

Guardians of the Galaxy wants to be, well, the Guardians of the Galaxy of video games. It’s funny and action-packed and heartfelt. It’s got aliens and spaceships and a neon 80s aesthetic. It’s also got a killer soundtrack, so good that James Gunn couldn’t be faulted for borrowing from it. It also bandies about names like “Chitauri ” and “Thanos” and “Nova Corps” as if players should be familiar with them, which, hey, they probably are.

Like the Avengers before it, it’s also far too beholden to the MCU, recreating too many of the key beats from the movies. It’s as if Eidos, or their corporate overlords, were afraid to stray too far from the familiar. Honestly, the MCU-adjacency of the Marvel games is starting to wear thin, right down to the cast of look- and sound-alike actors who don’t demand Hollywood paycheques. Discount Star-Lord even sports a beard, maintaining the ridiculous Marvel Video Game Tradition of using facial hair to distinguish characters from their MCU counterparts.

But none of that really matters, because Guardians of the Galaxy is so much fun. A third-person action game, Guardians puts players in the jetboots of Peter “Star-Lord” Quill, accompanied by a familiar team of AI companions. Although you solely control Star-Lord, your teammates are actually useful, whether left to do their own thing or deploying special attacks at your command. I especially love the “team huddle” mechanic: at certain moments, you can pause the action to deliver some inspirational words to the team. It triggers a combat boost but, more importantly, it also triggers one of the game’s thirty-odd licensed songs, from artists like A-ha, Joan Jett, and Blue Öyster Cult. Like I said, the soundtrack is awesome.

Guardians is also the funniest video game since South Park: The Stick of Truth, and the funniest superhero game since 2013’s Deadpool. The endless and (mostly) good-natured bickering between the Guardians had me laughing out loud, and one of my favourite things to do was just hang around the ship and listen to teammates chat between missions. (The painfully repetitive combat banter, on the other hand, could have used some major editing.)

As for the team, Star-Lord is the same character you remember, a likeable rake with good intentions and half-baked plans. Then there’s Drax, whose literal-mindedness and deadpan delivery generate the game’s biggest laughs. Groot is, as always, the heart of the team, his limited vocabulary made up for by those soulful eyes and unfailingly good nature. Rocket is, well, Rocket – he’ll get on your nerves, but tends to do or say the right thing just when you need it. Finally, there’s Gamora, the “deadliest woman in the galaxy” – more self-serious than the others, though with more of a sense of humour than her big-screen counterpart. 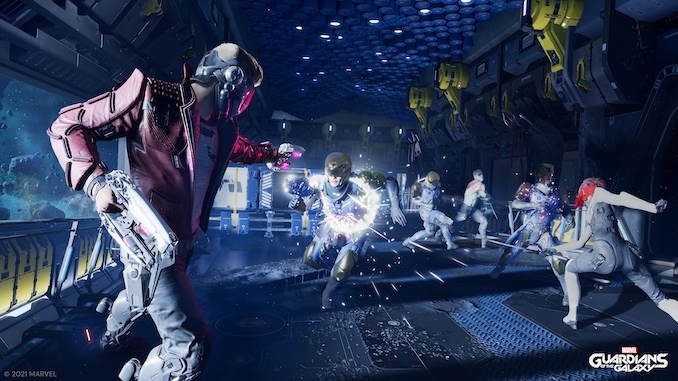 FOOLED AROUND AND FELL IN LOVE

One of the unexpected benefits of Disney gobbling up every intellectual property under the sun is that Guardians is overflowing with great, if self-serving, pop culture references. A whole host of Disney-owned properties are name-dropped, and this is also the first MCU-adjacent game to reference the X-Men. (Let’s just say, Star-Lord’s musical tastes run very 80s and very Marvel.) Fans of Marvel’s cosmic comics will also get a kick out of the game’s many Easter Eggs, including deep-cut references to characters just begging for an MCU adaptation.

That said, it’s glaringly obvious Disney put certain things off limits, lest Guardians accidentally interfere with MCU Phase 27 or whatever. How else to explain a Nova Corps with no Richard Rider, or the game’s incredibly generic and vaguely-defined “Galactic War”? (You can practically see where they struck the word Annihilation from the script.) It also helps explain why so many – though not all – of the game’s baddies are D-listers or discount versions of better-known characters. It’s more likely to annoy Marvel zombies like me, but even casual fans may wonder at all the generic enemies. 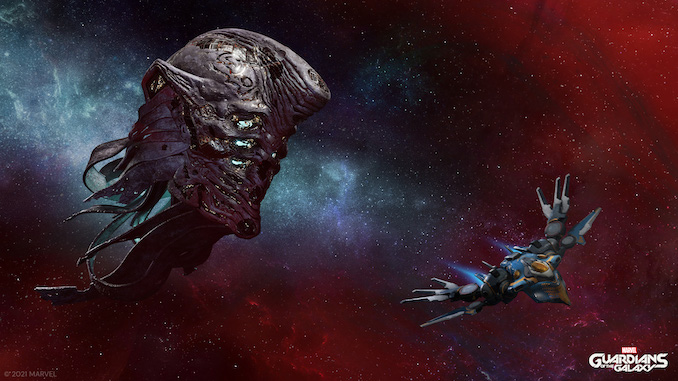 And yet here we are: Guardians of the Galaxy is easily one of my favourite superhero games ever. It’s a title that’s deeply rewarding for lifelong fans like me, while being a whole lot of fun for everyone else. It’s funny, it’s steeped in Marvel lore, and the tunes are fantastic.

Visit the official website for Guardians of the Galaxy here. (Hit the link. Trust me, it’s worth it.)

MLB The Show 17 is great, even with diminishing returns

MLB The Show 17, from San Diego Studios, is by far the best baseball game for next generation video-game systems. […]