Our review of Marvel’s Avengers, developed by Crystal Dynamics. Released on September 4, 2020 for PS4 (reviewed), Windows, Xbox One, and Stadia. 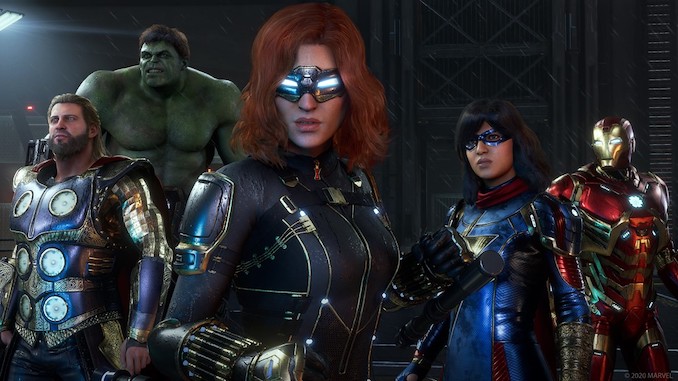 It’s either a brief and entertaining single-player campaign through a Marvel Cinematic-like Universe, or it’s a grind- and microtransaction-heavy loot fest with a needlessly complicated online metagame.

The Avengers part is fun. The multiplayer grinding for skill upgrades and costume variants is at best a fun diversion and at worst an obvious ploy to bleed gamers of their hard-earned dollars.

Comic book nerds. People who liked Endgame but wished it had more scenes of the Hulk distracted by loot crates. 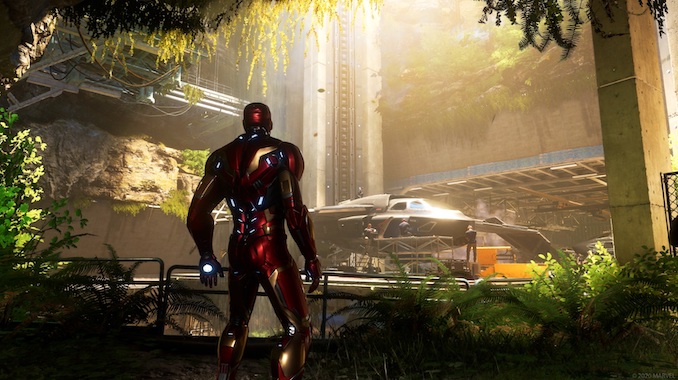 I’ve long had mixed feelings about Kamala Khan, a.k.a. Ms. Marvel, the nominal star of this year’s new Avengers video game. On the one hand, she’s so obviously an audience surrogate – a comic book geek who gains superpowers and proceeds to fangirl all over the heroes she teams up with – that she can be grating. On the other hand, her awe over hanging out with Thor is believable, and there’s something refreshing about an audience surrogate who’s both a young woman and Muslim. (Plus, anything that will upset the #SnyderCut types is fine by me.)

I mention all this about Kamala because Marvel’s Avengers very much wants players to be “like Kamala.” Not only via its Kamala-centric single-player campaign, which sees her trying to re-form the Avengers in the wake of a terrible Endgame-type disaster, but also in the way it expects you to be as obsessive about collecting as she is. And I’m not just talking comic books, but also gear, random loot, skills, costumes, and a confusing ecosystem of upgrade material that can be purchased for real world dollars.

That metagame can be ignored if you so choose, but then you’d be missing out on the majority of the game, which takes place in a persistent online co-op world. The idea: blast through the single-player campaign, then drop in every few days for an online mission to grind out some more loot.

As for the implementation… 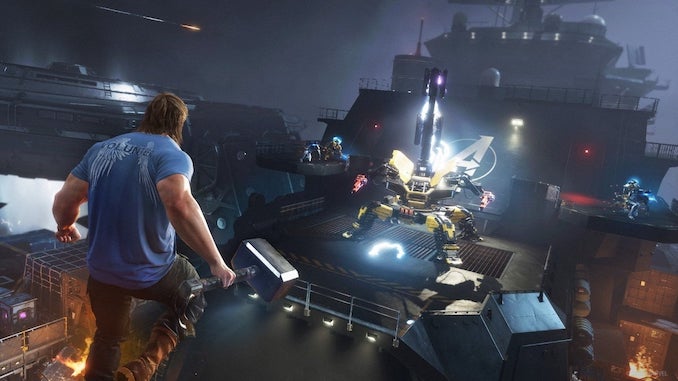 OF GODS AND MINIFIGS

At its admittedly solid core, Marvel’s Avengers is a classic action-adventure game only slightly more sophisticated than a button-masher. In its single-player campaign, you’ll happily fly and smash and hammer and shield your way through a dozen or so levels ranging from forests to S.H.I.E.L.D. helicarriers to space stations. It’s almost admirably old school: you’ll need to smash crates for health pickups, and defeat seemingly endless waves of generic enemies before getting to the vastly more fun boss fights. And, just like Marvel Superheroes War of the Gems or Marvel: Ultimate Alliance before it, the game artificially (and absurdly) balances things by assigning every character the same basic stats: from the Hulk on down to Black Widow, it only takes a few hits to be knocked unconscious. This also leads to some annoying difficulty spikes, where the game overwhelms you, and your PS4 – this game can get seriously laggy, both online and off – with too many on-screen foes.

Looked at from a certain angle, Marvel’s Avengers reminds me of the best Avengers games ever made, namely the three LEGO Marvel titles. For all their kid-friendly aesthetic and easy gameplay, those games understand too well the comic book or gaming nerd’s obsessive drive for collecting, rewarding players at every turn with a new obscure hero (hi Darkhawk!), a LEGOfied recreation of some iconic locale like Dr. Strange’s Sanctum Santorum, even letting you hang out with Stan Lee (voiced by The Man himself!). In merging the best superhero universe (sorry, Distinguished Competition) with the LEGO joy of collecting and building, the LEGO Marvel games hit that sweet spot where there’s always just one more hour, one more level, one more character or costume to unlock.

That drive to collect is present in Marvel’s Avengers, but malformed. Instead of a new character around every corner, you’re restricted to the core and by now too familiar MCU roster plus Kamala Khan. And when you do get to grinding, your rewards boil down to slightly higher punching power and maybe a cool costume or two. There’s potential here – Spider-Man and two Hawkeyes are already on the way as DLC, along with a lengthy list of leaked MCU characters – but for now your only real reward for levelling up is the opportunity to level up more. 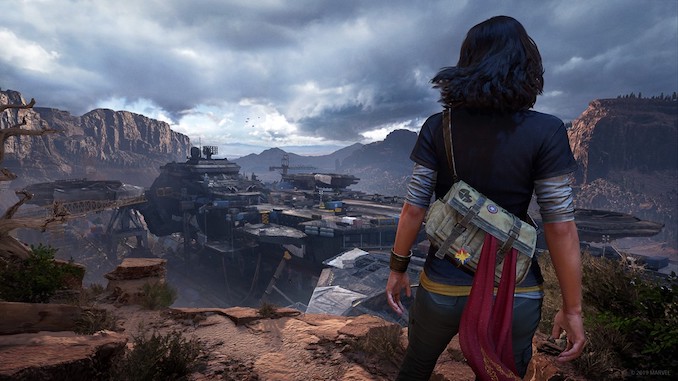 For years, Marvel has been trying to make the Inhumans a “thing”. From the start, it was a cheap and obvious ploy to find a marketable alternative to the X-Men, whose film franchise rights were owned by Fox. On TV, Marvel’s Agents of Shield was forced to sub in the Inhumans as a race of superpowered humans persecuted because they were “born different”. There were plans for an Inhumans movie, later downgraded to a (dreadful) TV serial. Heck, Marvel even cancelled X-Men comics and replaced them with series featuring the Inhumans. The ploy never worked – the Inhumans were never as compelling a concept, not to mention brand name, as the X-Men – and in the end it didn’t matter. In 2019, Disney bought Fox, bringing the X-Men and mutants back into the Marvel licensing fold.

It’s easy to see the influence of those pre-merger corporate shenanigans on Marvel’s Avengers, development of which began prior to the Fox/X-Men acquisition. For one, the main plot is shamelessly lifted from the classic X-Men storyline “the mutant cure”, right down to the presence of purple robots hunting down Inhumans with the backing of the U.S. government. Similarly, the heroic Inhumans, like Kamala Khan, are here because they have “sworn to protect a world that hates and fears them.” Speaking of Kamala, you can also thank Marvel corporate for the fact that she has Mr. Fantastic’s powers – when she debuted in the comics, the Fantastic Four rights were still tied up at Fox, and on the receiving end of even worse treatment by Marvel.

The game is a product of the corporate hivemind in other ways, some amusing, some annoying. Annoying: the game’s MCU-like universe featuring discount/off-brand versions of Robert Downey Jr.’s Iron Man, Scarlett Johansson’s Black Widow, etc. Amusing: that the game differentiates the male heroes from their cinematic counterparts by giving every one of them a sexy, sexy beard – yes, even the Incredible Hulk. Annoying: the way Marvel’s Avengers retreads a lot of the S.H.I.E.L.D.-centric mythology that was never so important in the print comics, even recreating scenes and scenarios straight out of the movies (see: Hulk manipulated by a prisoner on board the Helicarrier). And though it’s a small thing (pun intended), the game also repeats the MCU’s mistake of relegating Hank “Ant-Man” Pym to a supporting/non-superpowered role. The man was a founding Avenger, dammit! Let him avenge! 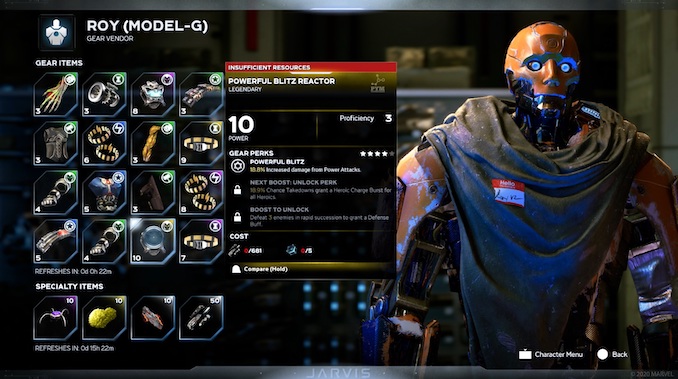 Annoying as that corporate influence is, it’s nothing compared to the game’s reliance on “ISO-8”, “Uru”, “Norn Stones”, and other microtransaction currencies drawn from Marvel’s mobile freemium games like Future Fight and Contest of Champions. In those games, the mix of oddly-named upgrade materials serves primarily to confuse gamers trying to save up enough loot to acquire a beloved superhero. Here, they’re a core part of the microtransaction-heavy online metagame that is undoubtedly the weakest part of the experience.

So far, the online “Avengers Initiative” mode is not worth the price of admission. Aside from the deplorable microtransactions – the game actively invites you to drop $130 for upgrade materials, on top of the $80 it costs to buy Avengers in the first place – there’s not much to see. Missions boil down to “kill X enemies” or “hold capture point for Y minutes”, and can’t compare with the epic set pieces of the single-player campaign. Plus, all characters can be unlocked through the main game (or, less palatably, as console exclusive DLC), so your only real reason to grind is for costumes or stat upgrades – that’s simply not enough, given the time/monetary commitment asked of you. That said, there’s always the looming threat publisher Square-Enix will start hiding the best and most interesting characters behind paywalls or extensive grind quests. Blech.

Online matchmaking is also an exercise in frustration: even though you’re tasked with pursuing set quest lines, the only way to reliably get online is with the “Quick Match” option. This strips your ability to hand-pick missions, and throws you some place random: sometimes it’s where you need to be; other times it’s one of the incredibly bland “fend off 10 waves of enemies” challenges. The launch was also notoriously plagued by bugs, only some of which have been ironed out in post-release patches. 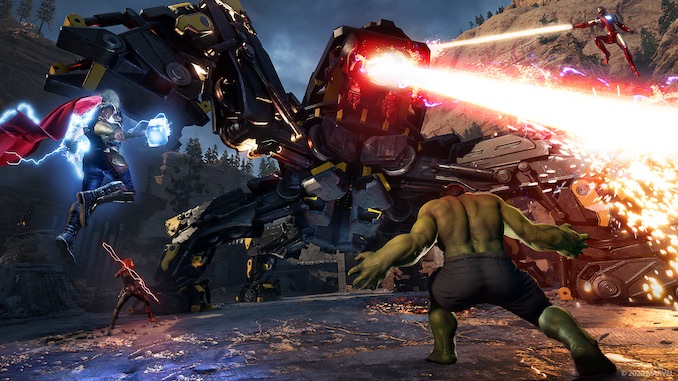 Marvel’s Avengers, the game, is a mostly fun single-player adventure largely focused on getting the gang back together; Assembling, if you will, a team to take on a threat more powerful than any one hero could face alone. Marvel’s Avengers, the metagame, is a mildly diverting exercise in assembling bits and pieces (gear, costumes) over the course of hundreds of hours or – Marvel’s preference – a quick-and-dirty $130 microtransaction or two. While this game has been billed as Marvel’s answer to loot- and grind-heavy games like Destiny or Borderlands, it’s really more akin to the deplorable gacha mechanics found in the Marvel mobile games I mentioned earlier. (Seriously, $130 for an upgrade! That should be criminal!)

At its core, Marvel’s Avengers is a game that dares to reimagine our beloved heroes as a quasi-interchangeable collective of punch-happy brutes who can be knocked out by the weakest A.I.M. soldier. Heroes who are happy to abandon their world-saving quests for the mundane task of opening loot crates. Heroes who sort of look and sort of sound like famous actors, but not quite.

Trapped in a metagame that asks players to grind for dozens of hours to buy a cool Hulk costume or a stronger Iron Man gauntlet, their famous rallying cry, “Avengers Assemble!” is here reduced to “Avengers… must assemble six Uru shards and twelve IS0-8 crystals to power up their Defence Rating.”

Final score: 6/10 ISO-8 crystals, whatever the heck that means.