Our featured charity this week is White Ribbon, a Toronto charity that is working to end gender-based violence! This year, their annual awareness-raising event, “Walk a Mile in Her Shoes”, will be going virtual! We spoke to a representative to learn more! 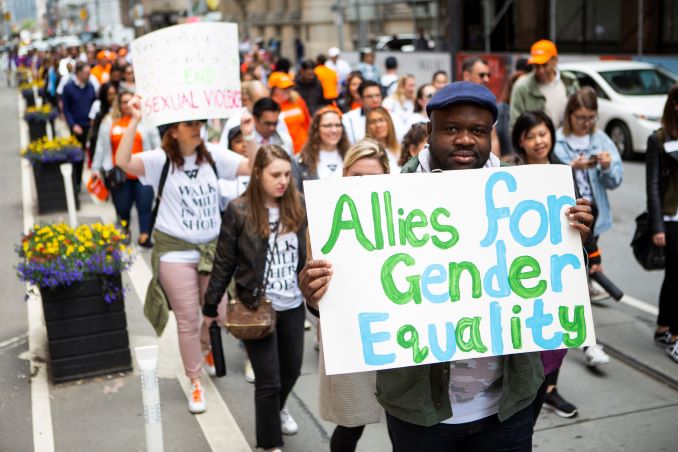 White Ribbon’s Walk a Mile in Her Shoes 2020, the organization’s 11th annual walk, is a one-mile walk to raise awareness and encourage men, boys, and people of all genders to make a commitment to end gender-based violence, racism and all forms of discrimination.

White Ribbon was founded in Toronto in 1991, as a response to the December 6, 1989 École Polytechnique massacre where 14 women were killed by a young man who hated women and feminism. White Ribbon Campaign initiatives have since been organized in over sixty countries across the world.

Violence and discrimination against women, girls, and people of all genders is an egregious human rights violation in Canada and around the word and is present at all levels of our society. It’s compounded by racism, homophobia, transphobia, colonialism, and many other forms of discrimination. This is why it’s so important to fully understand and address the root causes and impacts of gender-based violence, and the increased risk of violence faced by female-identified, trans and gender non-conforming folks. We can make a serious difference by engaging boys and men to pledge never to commit violence of any kind, and to stand against gender-based violence and all forms of discrimination.

The three men who founded the White Ribbon Campaign (Jack Layton, Michael Kaufman, and Ron Sluser) came together in 1991 to encourage other men and boys to speak out against all forms of violence against women. They felt men were largely absent from the broader conversation to address violence against women following the Montreal Massacre.

While there is more awareness today of gender-based violence than in 1991, it is still an issue that is very much prevalent in our society. Over this past year, COVID-19 highlighted the inequalities that women continue to face, with increased rates of domestic violence, harassment and assault at home and outside the home. At the same time, we see more and more people wanting to come together to end inequalities and oppression – more men and boys today want to challenge outdated forms of toxic masculinity, end violence and inequality, and stand in solidarity with survivors.

We must call on all of us to apply an intersectional feminist lens to issues of inequality – and to call in more boys and men to stand against violence and discrimination of all types. Men and boys need to challenge their own behaviours and those of their peers, they need to advocate for systemic change to promote gender equality, and pledge to stand side by side in solidarity with women’s organizations and survivors of gender-based violence.

We encourage everyone to participate in our virtual ‘Walk a Mile in Her Shoes’ event, taking place everywhere from September 26th to October 2nd. Ask your friends, colleagues, and family member to join you and walk your neighbourhoods or workspaces to support the work to end gender-based violence, and all intersecting forms of discrimination. You can register online here.

Our 11th annual ‘Walk a Mile in Her Shoes’ will be taking place virtually this year, from September 26 to October 2. This event is a great opportunity for participants to come together to stand with survivors, raise awareness and funds to end gender-based violence and discrimination. Visit our website for more information.