Our review of the Playdate handheld gaming console by Panic Inc. Available now. 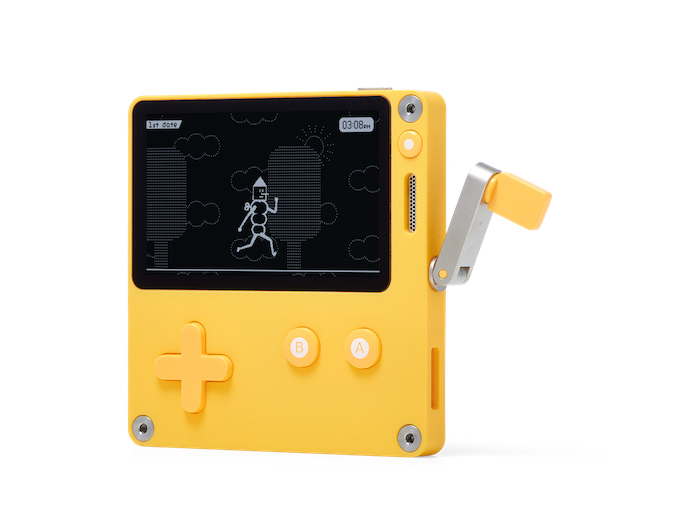 The crank is a prank.

After several weeks with retro handheld gaming console the Playdate, at least some of which was spent embarrassingly spinning its wind-up crank while fellow bus riders looked on, I realized this has to be the case. There’s no good reason for a video game console to come with a built-in crank, especially when that console is a bright yellow portable device that looks like the lovechild of a Game Boy Color and an old timey wind-up telephone. There’s doubly no good reason for that circa-2022 handheld to feature “1-bit” monochrome graphics which haven’t been in vogue since Milli Vanilli had their first hit single.

There’s something undeniably charming about the Playdate, with its retro chic aesthetic and nostalgia-laden thrills. It’s a dorky little thing, no doubt, but I kind of love my little Playdate, even if I often feel ashamed to be seen playing it.

Which just about sums up the Playdate: a hipster-friendly old-school handheld, its simple graphics and absurd controls betray just how badly it wants to be the console for the skinny jean-wearing, matcha latte-sipping gamers among us. Which, to be honest, is okay – I may not drink matcha, but I do own a t-shirt with a Sega Genesis logo styled as a SNES logo – though you do need to go into the Playdate knowing if you’re the right audience for it. 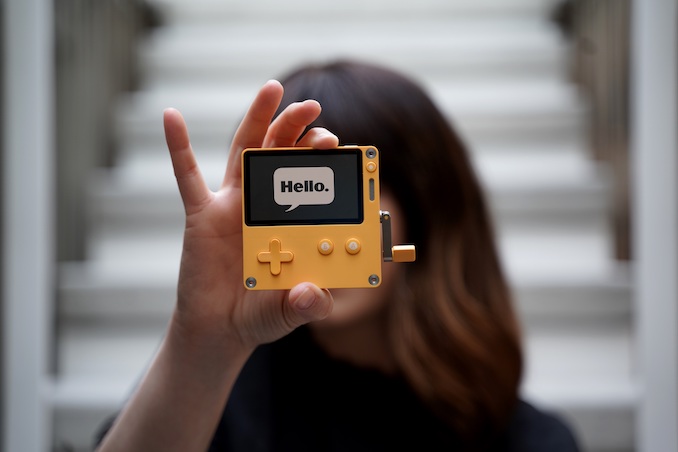 The crank is not a prank.

Having now spent several weeks with the Playdate, I’ve encountered a bevy of uses for its most noteworthy mechanism. Some of these are, admittedly, blasé, or even counterproductive – there’s a surfing game which would be infinitely easier if it just let me use the d-pad – but others are novel, or cute, or some combination of both. Take its “rotation platformer” puzzle game, in which you spin the crank to rotate a set of interconnected circles. It’s intuitive, it has a flash of that “it’s neat!” vibe you’d hope for with a gameplay gimmick, and most importantly it’s fun. Sure, the crank is in no way a necessity, and it’s unlikely to launch any hot new gaming trend (no “crank-enabled” Switch 2.0 in the future, that’s for sure), but it has its uses, and it certainly makes the Playdate stand out when you’re brave enough to play it in public.

Speaking of playing in public – much as I might get a deep wave of nostalgia from the Playdate’s black-on-gray pixelated LCD screen, that screen is difficult to see unless you have perfect lighting conditions. Darkened room? Forget about seeing anything. Bright sunlight? You’re liable to be blinded by the glare. Inevitably, you’ll wonder why it didn’t come with a built-in backlight like, say, any LCD watch released since 1981.

With its whopping 400×240 display, measuring all of 76 × 74 × 9 mm, the Playdate is superficially less exciting than a graphing calculator (and my good ole TI-83 wasn’t exactly lacking for games). True, it has more processing power – 16 MB RAM, 32 KB L1Cache, 4 GB Flash – and it’s Internet enabled, which is how you download games and post to online leaderboards. (Sadly, there’s no online multiplayer for now, though it may arrive in future games.) It also has rock-solid battery life – a full 8 hours while active, and 14 days when left unplugged on standby mode.

Still, battery life and gimmicky controls do not a system-seller make, and I highly doubt that the Fortnite generation is going to go wild for a handheld so clearly built by and for nostalgic weirdos like me. Even the price point – USD $179.99 for a fancy Game Boy-alike – puts it outside the range of a stocking suffer, given that a Nintendo Switch Lite can be picked up for only about $50.00 more.

What this all chalks up to is, even more so than for other consoles, the Playdate really does live and die by its games. Which, on the whole, are entertaining enough to justify the price of admission. 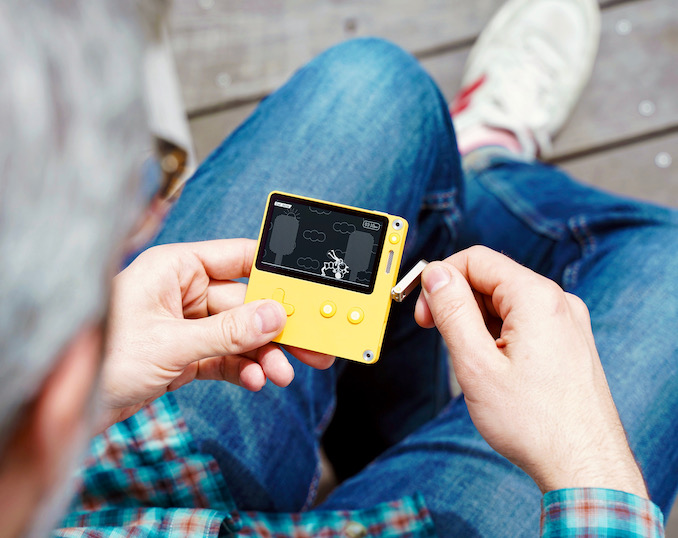 Unlike traditional consoles, all games on the Playdate come free with your purchase of the system. Every week, two new games pop up on your handheld, their arrival heralded by a flashing purple light (a rare dose of colour, emanating from the physical hardware itself), and an on-screen animation of a gift being unwrapped. Like much else about the Playdate, the whole process of opening new games is just so darn cute.

“Season 1” of the Playdate features 24 titles, rolled out across twelve weeks. As might be expected, these games are Very Indie, developed by whatever is the opposite of a “who’s-who”. On the plus side, the obscurity of the developers means each new game is something new and wholly unexpected – open up something like Demon Quest 85, a “Crooked Park” game, and you truly have no idea what you’re getting into. The obvious downside, however, is that these games are of wildly varying quality. Say what you will about monoliths like EA – and believe me, I have – but at least they have Quality Assurance departments for this sort of thing.

Since much of the delight with the Playdate involves opening random new games each week, I hesitate to spoil too much. Still, it’s worth knowing what types of experiences to expect, for which I can provide a brief overview.

By and large, Playdate titles can be separated into three categories – the truly entertaining games, the “fun, but this probably would have worked better on a normal console”, and the total b—s—.

The first category includes the one game (to date) made by an actual, honest-to-goodness, mainstream developer, none other than Keita “Katamari Damacy” Takahashi. My first time with Crankin’s Time Travel Adventure, I didn’t register that this was from the same dude who created one of the all-time greatest video games. But once I made the connection, it made all the more sense: Takahashi’s Playdate contribution is easy to comprehend, has a simple, goofy, but compelling premise, and uses the crank in an interesting, unobtrusive way. You can tell Takahashi had fun thinking about and making this game, and players will have fun with it too.

Other games in the first category include the aforementioned Demon Quest 85, which does not in any way resemble the game you’re likely picturing, but is honest-to-goodness laugh out loud funny, while also being disturbingly weird at the same time. To describe it as a text-based puzzle adventure is technically accurate, but doesn’t quite do it justice. I also quite enjoyed the Playdate’s version of a chess game, even though its internal logic gets more and more confusing the deeper you go.

Into the second category I’d happily lump a large chunk of the Playdate games which appear to have been designed for traditional controls, with the crank mechanic tacked on afterwards. Bizarrely, this category includes the very first game you unlock upon booting up the Playdate, that surfing game I mentioned earlier. While this surfing game isn’t terrible, it’s made deliberately difficult by the crank-based control scheme. Others in this category include a Game & Watch-style elevator management game, as well as a minigolf game that pales in comparison next to something like Apple Arcade’s What the Golf? Again, there’s nothing wrong with these games, but they occasionally may have you aching for traditional controls.

Finally, there’s what I am diplomatically referring to as the total b—s—. There isn’t a lot of it, but, yeah, some of the “gifts” you unwrap start to feel an awful lot like lumps of coal. Probably the worst example is the Playdate’s “match-three” game, which I’m convinced exists solely as a joke at the expense of all those mobile Bejeweled/Candy Crush clones. (After all, the cell phone is the portable Playdate’s “direct competition”!) I’m also going to go ahead and call total b—s— on the Playdate’s “music maker”, which has all the charm and sophistication of a knockoff Mario Paint Composer. (Go watch this Mario Paint “Get Lucky” video instead.) To be fair, that’s only two games out of twenty-four, but they’re still bound to disappoint. 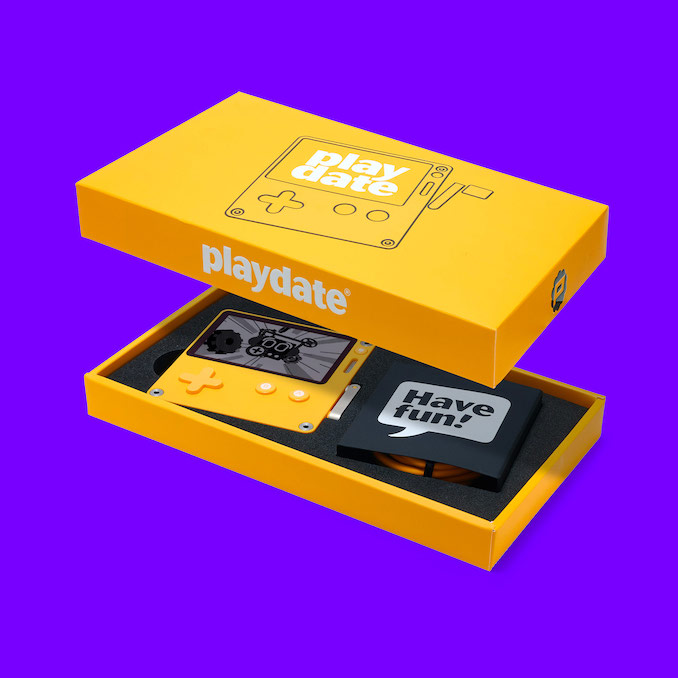 THEY SAY SEASON TWO GETS A LOT BETTER

The Playdate is the gimmick system for 2022. It’s the typewriter/Polaroid/penny-farthing of video games, and it’s bound to draw attention no matter which microbrewery you’re hanging out at. With its d-pad and A and B buttons, it really does look and play like a revamped Game Boy, albeit one with a crank and an internal accelerometer, the latter of which allows for moderate motion control (though I haven’t made much use of it).

Even if the Playdate is a gimmick, it’s still a pretty good one, with a lot of promise. And that’s why I’m especially excited for Season 2, and the open-source Development Kit already freely released on the Internet.

For Playdate’s second season, the game I’m most looking forward to is another from a high-profile auteur, Lucas Pope, creator of Return of the Obra Dinn, one of my favourite games of 2018. Pope is one of the geniuses of contemporary game design, and if anyone is going to have novel ideas about the crank, it’s going to be him.

The Dev Kit is also a tantalizing bit of software. Panic Inc., the brains behind Playdate, are actively encouraging creators to build their own games, all of which players will be able to “sideload”, i.e. install from outside the official release ecosystem. I’m curious about what kinds of oddities will spring up. I have a sneaking suspicion that the Playdate may well prove the testing ground for a whole new generation of game makers who might otherwise have gone unnoticed. And you know what? I’m going to be right there with them. If only to say I was cranking before anyone else.

Our review of Horizon Forbidden West, developed by Guerrilla Games. Available February 18, 2022 for PS5 (reviewed) and PS4. WHAT […]