Our review of Return of the Obra Dinn, developed by Lucas Pope. Released on October 18, 2018 for Mac (reviewed) and PC. 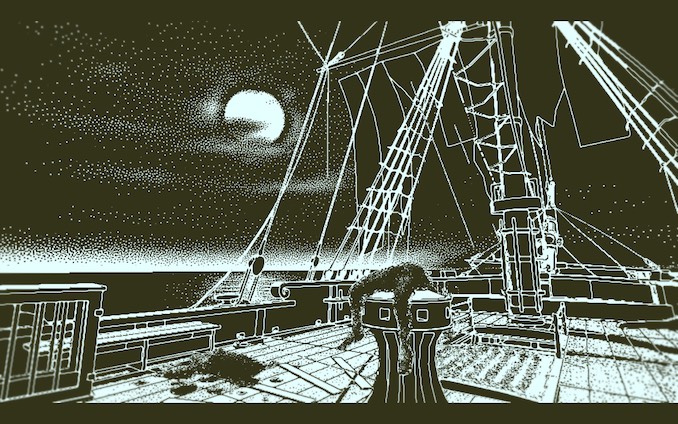 Sherlock Holmes fans, Mensa candidates, people who do logic puzzles for fun. Content advisory: This game is gruesome and not for the faint of heart. 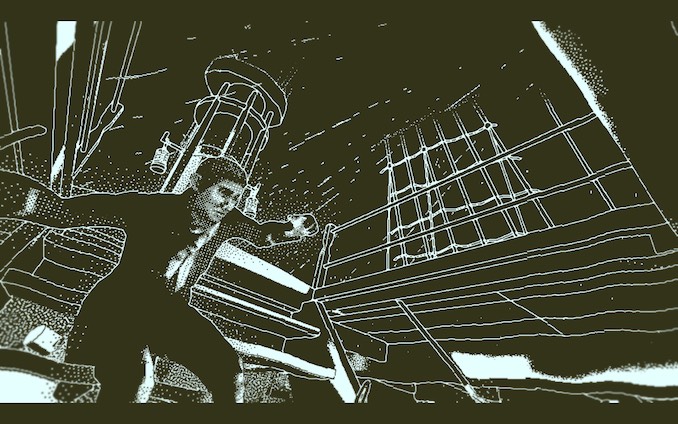 I trust that you now find yourself aboard the Obra Dinn. I expected this day to come and my every intention was to tell the ship’s strange tale within the pages of this book.

Regrettably, failing health has allowed me to produce only the basic outline that follows.

Your presence on the Obra Dinn is critical. I leave the discovery of its fate and the completion of this book in your hands.

So begins Return of the Obra Dinn, a brain-teasingly compelling new mystery game in which you, the unnamed insurance adjuster protagonist, are tasked with figuring out what happened to all 60 passengers who disappeared from the titular ship. Played from a first-person perspective in bleakly beautiful black-and-white, its tale of murder, betrayal, and suffering is, though unrelentingly grim, nevertheless largely enjoyable.

Return of the Obra Dinn also marks another return of sorts: that of its creator, the one-man gaming visionary Lucas Pope, who five years ago gave us what I still consider one of the capital-G Great video games: Papers, Please. But where Papers, Please was an intelligent rumination on the bureaucratization of evil – a game that put you in the shoes of a Soviet-style border agent, enforcing increasingly arbitrary and therefore cruel immigration rules – Obra Dinn, if not relaxing those stakes, at least replaces them with a far more elementary one: whodunnit. 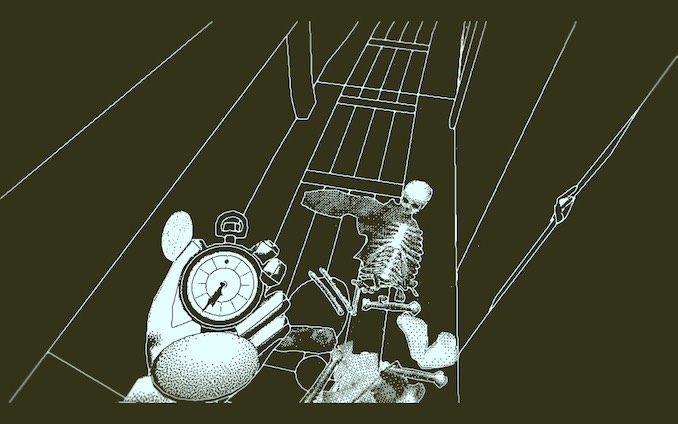 Your first and only assignment in Obra Dinn is to uncover the individual fates of its 60 passengers. You do so by combining the standard tools of the detective trade – a constantly-updating notebook, your deductive reasoning, a healthy dose of luck – with some spookier abilities. Namely, a mystical doohickey – a pocketwatch embossed with a foreboding black skull – that lets the player, upon the discovery of a corpse, revisit the precise moment of that person’s death.

These “jumps” all take the same form: first, a brief snippet of audio, usually the last few words that the deceased heard. Then, and this is always a treat, you’re dropped, first-person, into a freeze-frame tableau of the fatal moment. 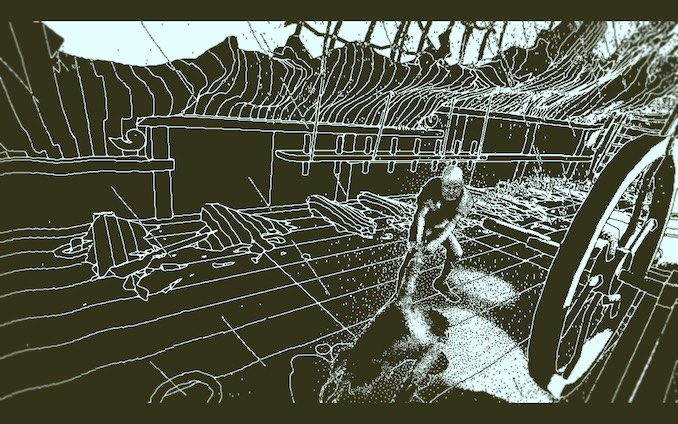 This is where the bulk of the game takes place, the player free to explore dozens of fantastically rendered frozen-time scenes of death, despair, destruction. It’s basically that Quicksilver scene from X-Men: Apocalypse, only it’s totally frozen – not even a hint of super-slow-mo – and you can’t interact with anything. Only observe.

The first such death-memory sets the standard: a man stands before you, firing a gun. There’s a puff of smoke hanging in the air. Turn around, and there’s another man collapsing to the ground: this is the cadaver you “jumped” from back in the present. Next to him, another man looks on, his expression a mix of anger and horror. Wander around some more, and you’ll quickly find other characters frozen mid-action, their actions, expressions, positions all clues to mysteries yet to be uncovered. Explore, inspect, soak the details in. 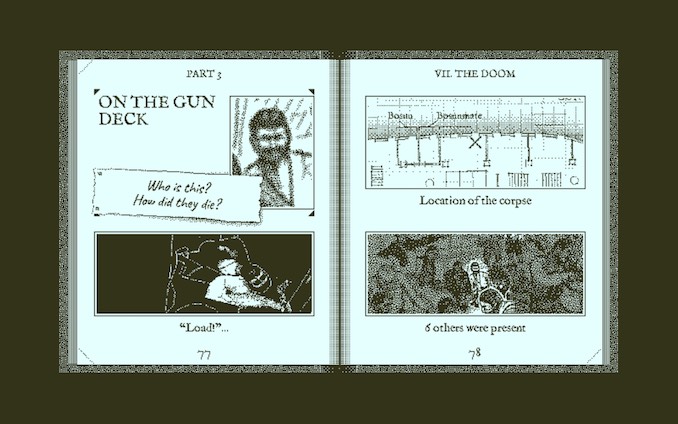 Now pop your virtual notebook open: this is where the puzzle-solving actually takes place. Specifically, you must solve three elements for every death-tableau: the identity of the deceased, the precise cause of death, and the one responsible. Think Clue: “(1) John Smith was (2) shot by (3) Smith Johns.” Although one or two of these elements might be present in a scene – here’s a man who’s obviously been shot, for example – most details, especially the identities of characters, can only be filled in later, as you visit other death-memories. Obvious lines of inquiry – a person’s uniform, the accent they speak in, the location of a death – must be combined with more subtle details that you’ll pick up as time goes by.

It’s initially overwhelming, your notebook a huge compendium of information, including a full passenger manifest, as well as a “life at sea” illustration depicting every passenger (unlabelled, of course). But, like all logic puzzles, once you figure out one element, others start falling in place. A victim in one scene is often the killer in another. A knife in one victim’s back can be found in someone else’s hands earlier on. Because you don’t – can’t – reveal the death-scenes in chronological order, it inevitably takes several trips back and forth to solve each mystery. 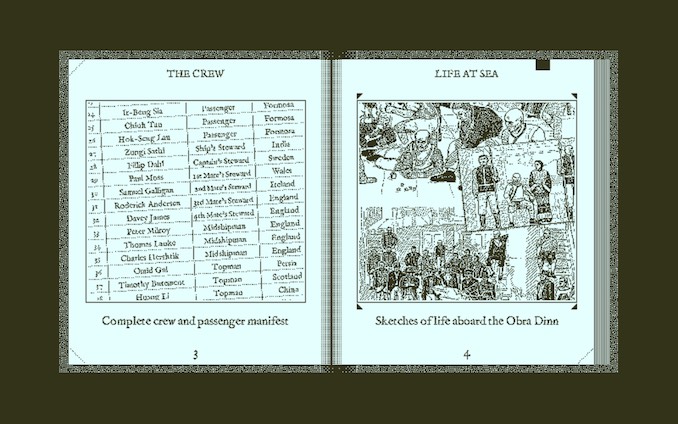 Make no mistake: this is a difficult, difficult game. You may be tempted to resort to an online guide – I did – though you should do your best to resolve most of the mystery on your own. It reminds me a lot of The Witness, a game that consisted of hundreds of often-painfully difficult brainteasers, but one that rewarded patience, diligence, and attention to detail with, well, puzzles even more difficult.

Obra Dinn doesn’t exactly get more difficult over time, though the clues do become more obscure. Thankfully, it also rewards you for correctly solving bits of the mystery. Three bits, to be precise: every time you solve any three fates, the game “locks” those in, letting you know you’re on the right track. Thus, it’s possible, and even encouraged, to rely on process of elimination and trial-and-error.

One thing Obra Dinn does have over The Witness is story, and character: specifically, 60 individuals whose faces and voices (pay attention to the audio!) you’ll get to know intimately over the dozen or so hours you spend with this game. And while the story is kind of bonkers (and not entirely satisfying, for my money), it’s fair to say that some entertainingly crazy stuff happened on that ship. Being dropped in media res into some of the wilder scenarios is always a blast. Avoid spoilers! 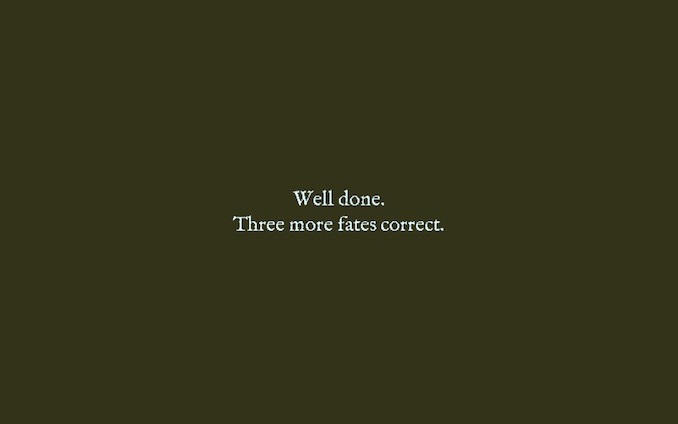 SOLDIERS OF THE SEA

Return of the Obran Dinn is not a game for everyone.

It is, I repeat, very, very difficult. As one giant logic puzzle with many parts, it’s more complex than anything you’ll find on the LSAT or SAT. It is also remarkably gruesome, with the audio pulling as few punches as the visuals. Prepare yourself for lots of gruesome-sounding arrrghhs and squelches as characters meet their grisly fates.

Perhaps unsurprisingly, my primary complaint is that certain puzzles are nearly unsolvable. There are red herrings – for a game that trains you to focus on language and appearance, there are a few too many characters whose identities really don’t line up with the information you’re given – and then there are certain clues that are just too obscure for anyone other than Mr. Holmes – or Mr. Pope, the developer – to figure out, let alone know to look for in the first place.

Still, it’s worth it to plow ahead, even if you need to cheat on occasion. The individual mysteries are fun to solve, and because the game “locks in” every three fates that you solve correctly, you never feel like you’re too far from opening up new avenues of investigation. To give just one last example: there are only so many Topmen – the dudes who work the riggings – on the crew. Once you’ve correctly identified a few of them, and the game has confirmed as much, it’s much, much easier to identify the others. 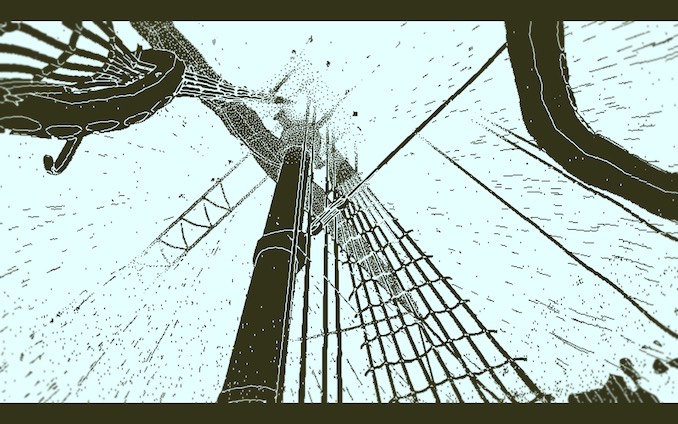 It doesn’t take a detective to figure out that, five years after the brilliance of Papers, Please, the arrival of a nautical murder mystery game from Mr. Pope is a bit of a letdown. Unlike its predecessor, Obra Dinn is neither particularly insightful, nor does it illustrate any themes broader than “life at 19th century sea really sucked”. But, and with all credit to Mr. Pope for embracing such a wildly different genre, it doesn’t need to. Obra Dinn is its own beast: violent, mysterious, compelling, and quite unlike anything else.

Visit the official page for Return of the Obra Dinn here.