A fully loaded zen bowl salad bursting with fibre, healthy mono-unsaturated fat, and vegetable protein – this salad is your bowl to feel-good wellness. For the science nerds, this dish packs a beta-carotene, potassium, vitamin A, lutein and zeaxanthin punch – and that all means it’s going to keep you thriving from the inside out. For those simply interested in taste – we’ve definitely got you covered thanks to house-made turmeric cauliflower, roasted sweet potatoes, crispy baked chickpeas, and even more goodness tossed with quinoa, cabbage, and even a few grapes for good measure! No shortcuts were made on the dressing either – a cilantro lime mix made with only whole food ingredients and none of the unmentionables. Cheers to zen life! 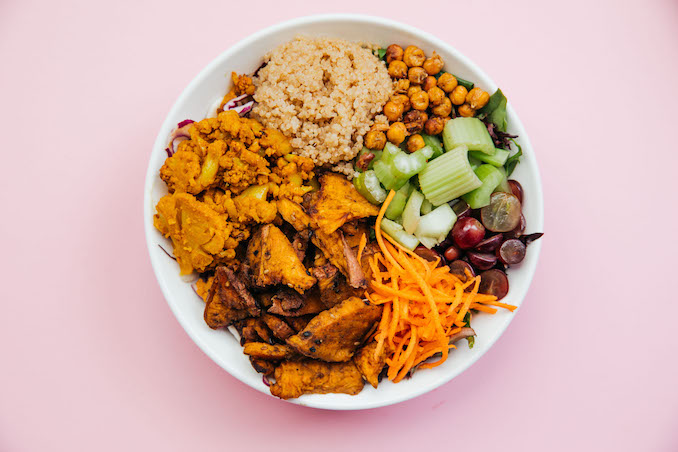 1. To make the cilantro lime dressing start with coarsely chopping cilantro on a green cutting board. Combine all ingredients in a blender and puree on pulse until smooth. Reserve until ready to serve

4. In a large bowl combine cauliflower pieces with the golden milk spice from step 2, avocado oil, chili flakes, and 2 tsp of the Himalayan sea salt. Mix until the cauliflower is well seasoned

5. In a single layer spread out cauliflower on a parchment lined baking sheet. Bake in oven for 20-25 minutes or until tender and a deep golden brown in colour. Once cooked remove from oven and allow to cool at room temperature. Reserve until ready to serve

6. To make roasted sweet potato, start with a preheated oven at 450F. Cut sweet potato into quarter wedges and then slice into 1/2-inch thick slices.

7. In a large bowl combine the potatoes with 1 tsp of za’atar and grapeseed oil until they are well coated.

8. In a single layer spread out potatoes on a parchment lined baking sheet. Bake in oven for 30-35 minutes or until tender and a deep golden brown in colour, approximately 15 minutes. Once cooked remove from oven and allow to cool at room temperature.

9. To make crispy baked chickpeas, preheat oven to 325F. Strain and rinse chickpeas in a conical strainer over an empty sink until water coming from the tip runs clear. Transfer chickpeas to a large mixing bowl and completely submerge in water.

10. Stir vigorously until skins separate from peas and rise to the surface. Skim and discard skins. Strain chickpeas and transfer to a large baking sheet lined with a green towel. Lay chickpeas in a single layer and cover with a second towel. Gently pat until peas are completely dried.

11. In a large mixing bowl toss together 100ml of the olive oil and chickpeas until peas are well coated. Transfer, in single layer, to parchment lined baking sheet. Bake in oven for 10 minutes, remove, stir chickpeas around, then return to oven for an additional 10 minutes.

12. Once cooked, they may require additional time, transfer chickpeas to a mixing bowl containing 3 tsp of za’atar and the remaining olive oil. Toss vigorously until well coated.

13. To assemble, in a large mixing bowl combine cooked quinoa with all remaining ingredients, except chickpeas, and toss until everything is mixed well and evenly coated with dressing.

14. Plate in your favourite salad bowl and garnish with chickpeas

Torontonians can now get their favourite poké bowls, smoothie bowls and salads for their next event with Calii Love’s new Catering Menu!

Recipe for Turkey Leg Firecracker Lollipops from Body by Turkey