Last week at the Elgin and Winter Garden Theatre, Marina Abramović gave a lecture about the past, present and future of performance art. Abramović also spoke about her recently established institution, MAI (Marina Abramović Institute), that encourages the development of public consciousness. The institute is the legacy of Abramović’s forty years of experience in performance art.

Located in Hudson, NY, The MAI building was designed by architect, Rem Koolhaas.  Abromovic described Koolhaus as a “mastermind of Architecture”. At the institute, Abramović’s aim is to raise visitors’ consciousness. Abramović described the MAI as the “new Bauhaus, a new community to change consciousness today”. For Abramović, it is important to influence the public body. She does this through the institute, her performances, and her interactive art objects, in hopes of influencing the public through experience.

When visiting the MAI, individuals must agree to at least a six hour commitment. Abramović explained that only long performance work can change us because “we need time”. Abramović asserted that we live in a “completely disconnected society”, and the institute focuses on fostering a reconnection with the self. She called this “The Abramović Method”, in which an individual connects with themself on their own time. 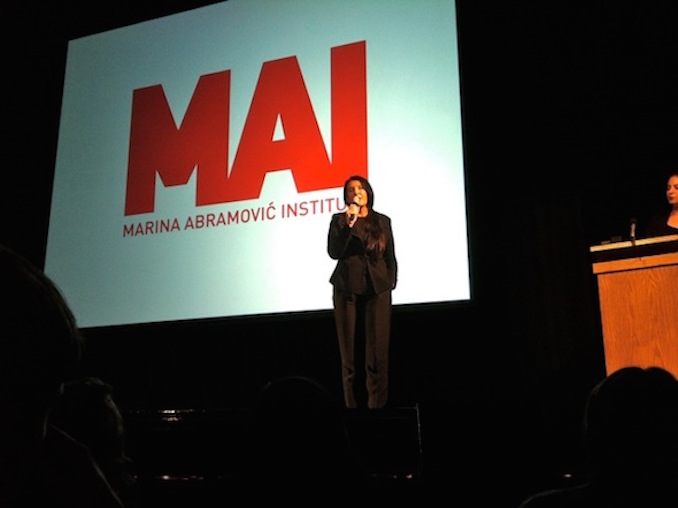 As a public figure, Abramović excels at the difficult task of keeping secluded in order to maintain her interesting character as an artist. In Abramović’s lecture, she distinguished a mediocre artist from a great artist: a great artist has the “disease to work”, separating themself from everything else in order to be interesting. Abramović hardly uses the internet. She asserted that technology has ruined taste and aesthetics. In her opinion, contemporary technology allows “the biggest piece of shit look good visually”. According to Abramović, “technology took everything away from us.”

Abramović emphasized the importance of focusing on the moment. For her, there is no past and no future. There is only the present. Abramović epitomized this idea in her performance work, “The Artist is Present” (2010). The work was a 736-hour and 30-minute silent work in which she sat immobile at the MoMa in New York City. The installation attracted more than 750,000 visitors and has been the most successful performance piece in MoMa history.

According to Abramović, performance art is about investigating the question, “what is the body?” Throughout her career, Abramović has used her body as a medium. Abramović taps into what she calls “Body Limits” in her performances, pushing the limits of her physical and mental being. When Abramović reviewed examples of great performance works, she described pieces that successfully utilized particular parts of the body: head, chest, hands, stomach, arms, and eyes. Abramović referenced the famous Surrealist film, “Un Chien Andalou” as an exemplar. In particular, the lecture audience viewed the video clip of a young woman close-up, with a man holding her eye open. The man sharpens his razor and then slits the woman’s eye with the razor. In this work, the man and woman transcends boundaries of the body and investigates the limits a body can take. Metaphorically, Abramović is interested in experiencing the edge, without falling off into the cliff of death. She said, “Only when you can understand death… you can focus on what is really going to matter”.

Another element that Abramović taps into in her performance work is “rest energy”: the energy a body musters in life threatening situations. Abramović literally pushes the limits of her body by putting herself in danger. In her performance work, “Rest Energy” (1980), Abramović endangered herself by transforming her body into a passive victim of an engaged crossbow, that was pulled back by her partner, Ulay. Abramović and Ulay leaned backwards, making the bow taught while pointed directly at Marina’s heart. Abramović and Ulay’s increasing heart rates were recorded by microphones that were attached to their chests. The recording of their beating heartbeats is a materialization of the rest energy their bodies mustered during this life threatening action.

Abramović described performance art as reality. This differentiates performance art from other types of performance entertainment like theatre. She stated, in performance art, “blood is blood” in contrast to ketchup in theatre. Abramović has been a pioneer in performing hyper intense installations that focus on violating and physically harming her sensorial body.

Ross Petty’s Peter Pan Soars High and Into Our Hearts

For the past few years we’ve had the most fun at the silly Ross Petty holiday stage productions. We look […]