Our review of Curved Space, developed by Only By Midnight. Available Now for PS5 (reviewed), PS4, Xbox Series X/S, Nintendo Switch, Xbox One, and Windows. 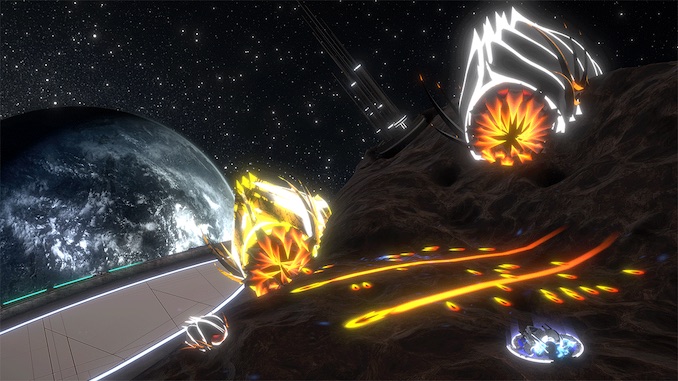 yEs aNd iT wiLL MAkE yOuR HEAd spiN.

I have fond memories of blasting through PS3-era Super Stardust HD, far from the first twin-stick shooter, but easily one of the best. In SSHD, players took control of a piddly little alien spacecraft circling a spherical planet, where enemies and laser beams attack from 360 degrees. SSHD could get dizzying, especially in its later stages where the screen filled with a dazzling array of lights and explosions.

Curved Space, a brand new indie shmup (“shoot-em-up”) game on the PS5 and various other modern systems, reminds me in a lot of ways of the SSHD experience. Like SSHD, it’s a twin-stick shooter, where you control your spacecraft with the left analog and aim attacks with the right. Like SSHD, it can be fiendishly but entertainingly difficult. Like SSHD, it has an unusual level design in which attacks can come from all angles.

Only instead of a sphere, you’re traversing complex, beautifully laid out, Möbius strip-like levels. It’ll bend your brain, even as it tests your thumbs. 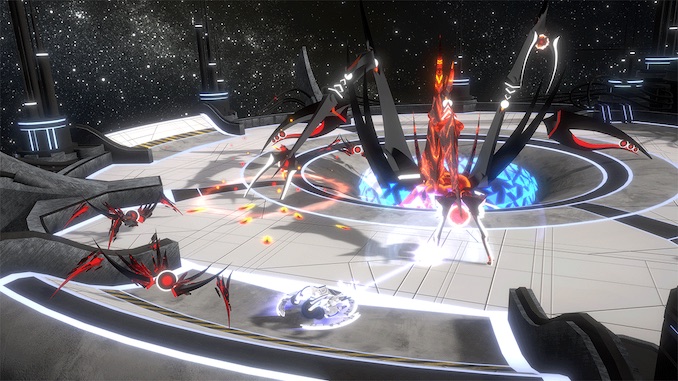 I’m a sucker for a pretty shmup. I’ve probably played hundreds in my day; some for mere minutes until the oppressive difficulty turns me off (check out the “bullet hell” genre), others for hours and hours until I’ve perfected a clean run. I’ve probably purchased ten times more shmups than I’ve actually completed. I’m addicted. This video of a dude simultaneously controlling first and second-player in Ikaruga never gets old.

Happily, Curved Space is not oppressive. It eases you into its gameplay dynamics, like the “Lash” that works like an energy tether, binding enemies together and encouraging you to ram into them for extra damage. There’s also a dash button and, key for shmups, a diverse array of weapons to unlock. Different types of enemies drop different types of weapons, and you’re usually rewarded for picking up the latest. There is, of course, a combo metre, which increases your points while building up your energy store to unleash massive screen-clearing attacks. 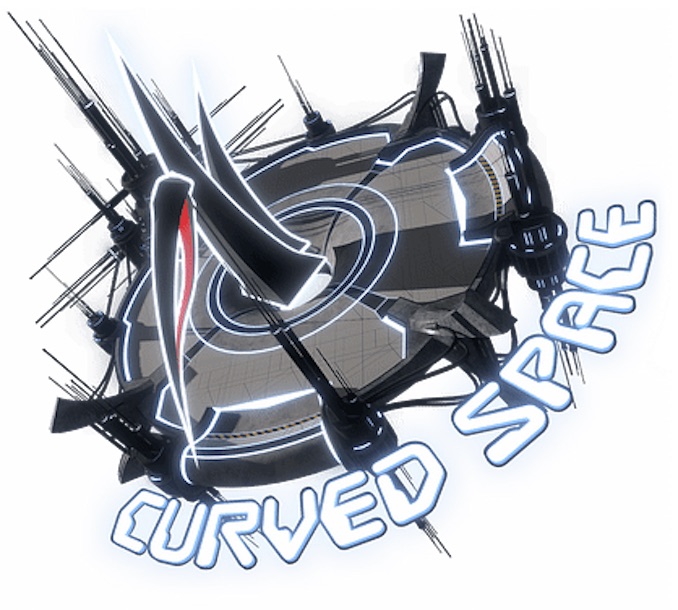 ESCHER’LY YOU CAN’T BE SERIOUS

There have been a handful of games that have recreated Dutch artist’s M.C. Escher’s marvelously mind-bending aesthetic. 2D logic puzzlers The Bridge and Echochrome had you rotating 2.5D environments to create impossible connections between platforms. The truly brilliant Monument Valley, available on iOS, did much the same only with a brighter colour palette.

Curved Space is not quite Escher. You won’t actually traverse impossible space. But you do spend a lot of time swerving and zooming around 3D environments that are hard to wrap your head around. I love those moments where you chase an enemy across a Möbius strip pathway, only to come back around to the place where you started. This game is not for the weak of stomach; I genuinely felt dizzy much of the time I was playing it. It was awesome.

It’s too bad that Curved Space is a bit of an obscure indie title. It really has all the hallmarks of a great shooter, even if it comes in a tiny package. I highly recommend it for the nostalgia kick, if you’re a shmup or twin-stick fan. I also recommend it if you like swirling through vortexes into infinity.

Our review of the board game Lifeform. Designed By: Mark Chaplin & Toby Farrands. Produced By: Hall or Nothing Productions. […]