Our review of Elden Ring, developed by FromSoftware. Available February 25, 2022 for PS5 (reviewed), PS4, Xbox X/S, Xbox One, and Windows. 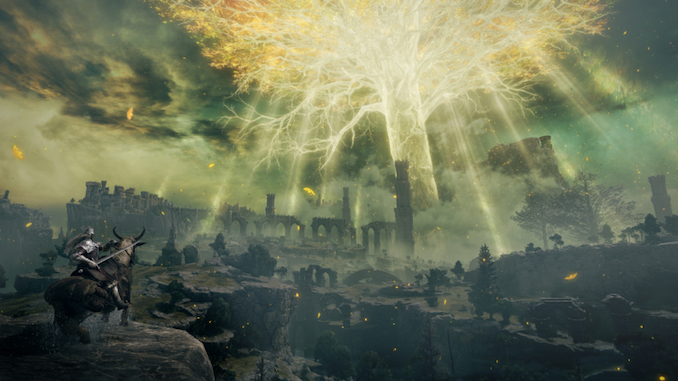 It hates you and it wants you dead, but maybe you’re into that sort of thing.

That one guest who survived the Red Wedding, then said to themselves, “well, that was fun.” 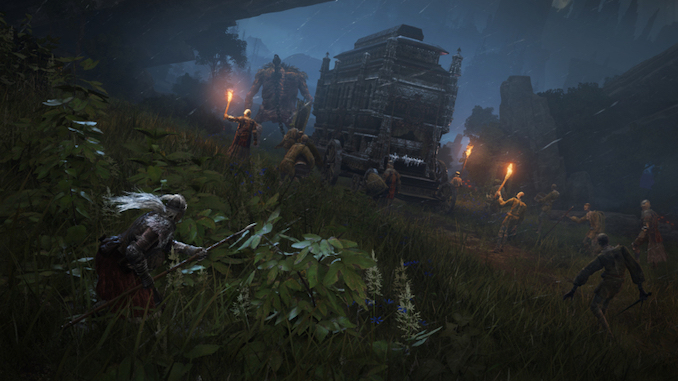 ONE RING TO RULE THEM ALL…

I’m here to tell you that the resulting product, Elden Ring, does exactly what you expect it to do, for good or for ill. An exceedingly difficult Soulslike, it hews so closely to the formula established by its predecessors you could slap a Dark Souls 4 or Bloodborne 2 on it and nobody could tell the difference. That’s fine – I mean, there’s a reason why these games are so popular – but after thirteen years of losing sleep over this cruelly difficult series, my patience is starting to wear thin. 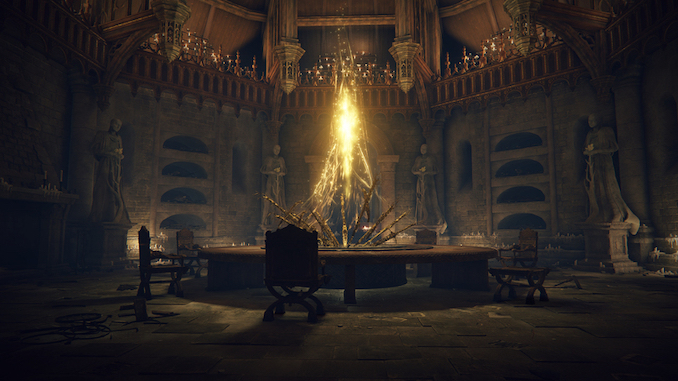 Dark Souls had the Cursed. Bloodborne had the Hunters. Elden Ring has the Tarnished.

In Elden Ring, you play as a “Tarnished”, a warrior summoned to the “Lands Between” to track down the “Great Runes” and restore the “Elden Ring.” Who are the Tarnished? What are the Great Runes? Is there tengwar inscribed on that Ring? Honestly, fifty hours later and I still don’t have a firm grasp on it. And not just because I skipped a lot of the optional bosses (if there’s one thing I’ve learned from Miyazaki games, it’s that optional bosses are for the masochists banned from the masochists’ club for being too hardcore), but because Elden Ring is deeply inscrutable. That’s a bit surprising given Martin’s reputation as a storyteller, but it’s par for the course in a series known for its opaqueness. Unfortunately, that opaqueness also bleeds into other aspects of the game, ones which really should have been refined given how long this “Soulsborne” series has been around. Try as I might, for example, I could never figure out how to get the co-op summoning system to work. I similarly struggled with the game’s many ill-explained mechanics – early on, I unknowingly loaded up on skills my character couldn’t use, and, no exaggeration, it took me until the fifteenth hour to understand how to counter-attack.

In most other ways, Elden Ring plays like its predecessors. You’re a big, lumbering soldier (or samurai, or mage, or any one of a dozen other classes), slowly swinging your sword and firing off magic and learning to perfect your timing to land critical strikes. Foes are a mix of human characters (knights, pitchfork-wielding villagers, that sort of thing) and a bestiary’s worth of fantasy creatures, including, in what must surely be an in-joke for Martin and Miyazaki fans, somewhere in the neighbourhood of all of the dragons.

I was also heartened to discover that, like Sekiro before it, Elden Ring somewhat departs from the horror-infused aspects of the Souls/Bloodborne titles. Yes, there are zombies and trolls and Harryhausen-style skeletons. But a lot of the enemies are more grounded, with a particular emphasis on supersized wildlife. You’ll encounter giant dogs, jellyfish, rats, crabs, bats, and so much more – including my personal favourite, the land octopus. It’s unfortunate, however, that a lot of these enemies are so poorly rendered. Even as Elden Ring‘s environments benefit from the PS5’s increased processing power, a shocking number of character models, especially the larger enemies, are disappointingly low-resolution. (The giant bears in particular could have been lifted from a PS2 game.) 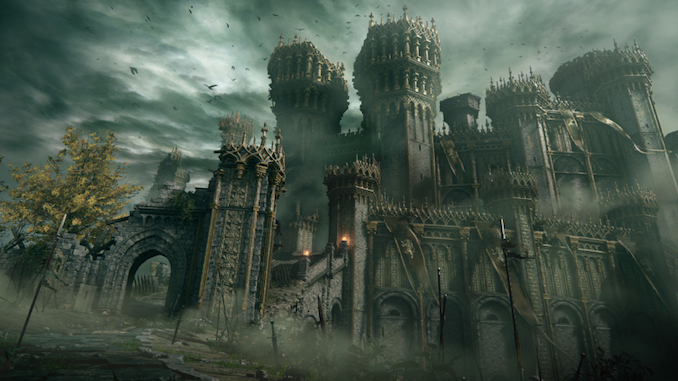 KING OF THE NORTH

Following a distractingly robust character creation process (you can spend hours in this thing), Elden Ring sets you free to do pretty well whatever you want. No, really. Previous Soulslikes have been quasi-open world, in the sense that you could travel to different parts of the map, but ultimately you’d be funnelled towards a specific boss fight that progressed the story. In Elden Ring, I spent my first couple days simply wandering the vast expanses of the Lands Between, taking on only those foes I chose to confront, checking out intriguing locales, and activating “Sites of Grace” (the equivalent of Souls bonfires) for fast-travel use later. For as long as possible, I avoided the one mandatory “plot boss” required to keep the story moving, and the game did not penalize me one bit.

This was weird. It’s weird to play a Soulslike that’s so resolutely open world. On the one hand, it means the famed interconnectedness of previous Miyazaki titles is largely absent. In other Soulslikes, you might spend hours wandering through a swamp, only to turn a corner and discover you’re at the hidden back gate of the first castle. By definition, this is not possible in Elden Ring: when you travel to the north of the Lands Between, it’s very, very far north. Elden Ring‘s unimpeachable fast travel system – it’s quick, easy, and free – means this is hardly a burden, but it’s still too bad that those jaw-dropping “oh wait, I’m here?!” moments are few and far between.

On the other hand, Elden Ring has some of the most rewarding exploration I’ve ever experienced in a video game. The map is huge, it’s varied, and it’s overflowing with secrets. I don’t just mean items, or hidden bosses – though there are more than enough of those – but full-blown hidden areas, tucked away in corners which any other game might have left barren. I’ll never forget the moment, about twenty hours in, when a whole other aspect of the game opened up to me, making me realize I’d vastly underestimated what there was to see and do.

That open world also means it’s quite easy, and subtly encouraged, to abandon the main quest and go off exploring to your heart’s content – something which your horse (unlocked seemingly at random, as far as I could tell) makes much easier. At one point early on, I found myself, more or less by accident, in a distant late-game realm even though most of its enemies were beyond my experience level. But it actually wound up to my benefit: Ring is structured such that even in the most intimidating of places, you’re liable to find low- to mid-level enemies that can be overcome. Out in that late-game realm, I stumbled across a convenient spot to grind out “runes”, the in-game currency, right when I needed it most.

It took me three days to defeat the very first boss in Elden Ring. And I mean long, oppressive days. Days in which I sweated for hours on end, testing out dozens of different strategies, only for none of them to work. Fed up, I’d go wander the map to level up my character and track down new weapons. (This, by the way, was when I found that late-game rune farm I mentioned above.) Travelling and exploring the world was fun. Getting my butt handed to me over and over again was not.

And that’s a problem. For all its promises of more accessibility, no doubt aimed at drawing in Game of Thrones fans, Elden Ring is just as damnably difficult as its predecessors, dating all the way back to the original Demon’s Souls. That means the same cheap one-hit kills. The same overpowered bosses with impossible to predict attack patterns. The same meagre health bar and scarcity of health items. I understand the appeal of this extreme difficulty – after all, this is my fourth Soulslike and counting – but Elden Ring is still plagued by some incredibly dumb and outdated design choices. That includes bosses defended by a gauntlet of enemies which reset each time you die, or the “now I shall reveal my true form!” bosses who drag you into a second, harder battle right when you’ve exhausted your last health potion – and with no checkpoint to preserve your progress.

There’s a decent argument that Elden Ring does not actually want you to overcome it. It wants to overcome you; it wants to beat you down so bloody and broken that you give up and walk away. And the only way to overcome it anyway, if you’re masochistic/foolish enough to attempt it, is to game the system.

And that’s the other problem with this series of masocore games. By throwing what are effectively unbeatable enemies at you, Elden Ring actively encourages you to find ways to break or bend the game. Run around in circles like an idiot in order to keep dodging that one boss’s attacks. Spend ten hours in the same spot, killing the same set of easy-to-kill enemies, to grind out XP and level up your character. Consult strategy guides for glitches or ways to get a boss stuck in a corner. (By the way, Elden Ring is an even bigger beast of a game when you’re playing an advance review copy and the walkthroughs aren’t out yet.)

Sometimes, Elden Ring makes you feel like a total badass. Other times, you feel like Captain Kirk cheating his way through the Kobayashi Maru. 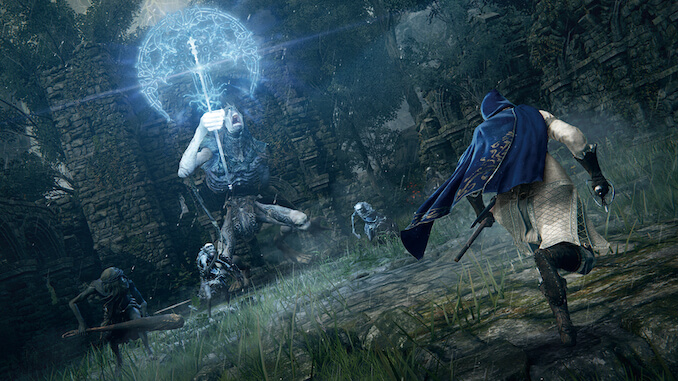 Every once in a while, Elden Ring all comes together magnificently. You discover an incredible new location, you figure out a way to score some extra runes, you finally upgrade a weapon so it does more than a mosquito bite’s worth of damage. You feel smart, you feel like you’ve figured out the system. But then the next boss comes along, that dastardly “plot boss” barring your story progress, whose massive sword extends the length of a field and can’t be parried. You can avoid him for as long as possible, go off and farm runes and hunt down equipment in the far reaches of the map, even as you remain painfully aware that no matter where you go, all paths lead back to him.

But you know what’s the most insidious thing about Elden Ring?

That it’s impossible to put down.

Every time a boss defeats you, it’s an invitation to try again; there’s always a new tactic, a different weapon to try out. Every time you’re killed deep within a dungeon, you immediately run back in, swearing to yourself you’ll evade the trap that got you last time. And every time you set off into an unexplored part of the map, you do so in the knowledge there’s a hundred different things waiting for you. Sure, half of them want to kill you. But the other half – the astonishing vistas, the hidden outposts, the game-changing abilities – just knowing they’re out there is enough to keep you going. Even if it means dying 10,000 times along the way.

Our review of Vader Immortal: A Star Wars VR Series, developed by ILMxLAB. Currently available for Oculus Quest (reviewed) and […]

Our review of Death Stranding Director’s Cut, developed by Kojima Productions. Released on September 24, 2021 for PS5. WHAT IS […]