Our review of Overcooked! All You Can Eat Edition, developed by Ghost Town Games/Team17. Released on November 12, 2020 for PS5 (reviewed) and Xbox Series X/S. 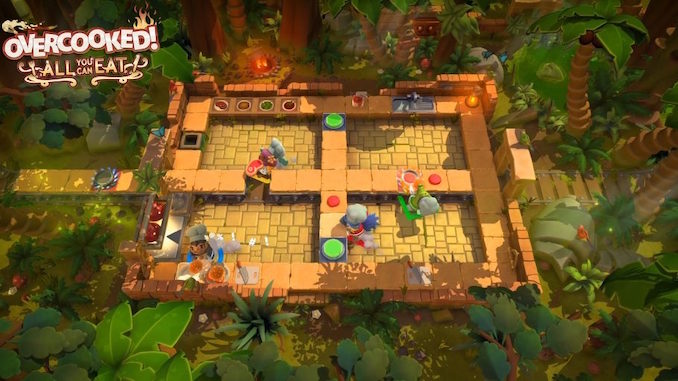 An entertaining but maniacally difficult co-operative cooking party, in the form of a greatest-hits compendium of every Overcooked! game released to date.

That exclamation mark in the title is well-earned.

People with friends. Newly-minted relationships may want to reconsider, however: this game can devolve into mutual recriminations faster than you can say spoiled soufflé. 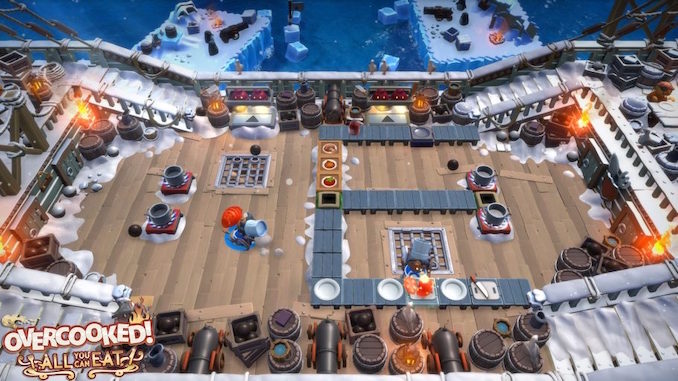 The Overcooked! games have been around for a while now, generating endless hours of co-op hilarity and more than one shouting match over who was responsible for prepping the onion soup. At PS5 launch, all of the Overcooked! games, including all DLC, have been combined into a greatest-hits edition with slightly improved graphics, a handful of new levels and chef avatars, and the saving grace of an Easy Mode.

These games have always been a lot of fun, whether in-person with a group of up to three friends or online. They’ve also long been a headache at their higher difficulties. There’s a certain fine line between amusing challenge and sadism, and these games sometimes tip into the latter. I’ve often wondered whether the creators of Overcooked! weren’t, I dunno, attacked by an aggressive lettuce leaf as a child. 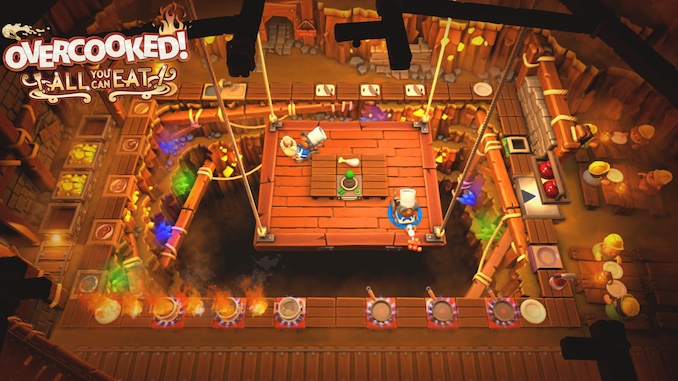 If you’ve read this far, you probably already know how Overcooked! works. Each level takes place in a single kitchen: cutting boards over there, stoves over there, bins full of lettuce, tomato, fish, potatoes, etc. over there. Oh, and don’t forget the washing station: that’s where you clean and collect the dishes on which your meals are served.

Each round of Overcooked! is a frantic dash around the kitchen trying to fulfil a series of relentlessly updating orders that slide across the top of the screen. Two fish and chips, stat! One hamburger – hold the tomato – stat! It’s a game that requires constant communication between players – “you go chop the potatoes, I’ll fry up some fish” – and which inevitably devolves into kitchen fires, abandoned orders, and angry (though thankfully off-screen) customers. At the end of a stage, you’re awarded a certain amount of points based on how many orders you fulfilled and how quickly, vs. how many you failed to get out in time. And as you may have noticed from the screenshots, the kitchens aren’t exactly ergonomically designed.

As mentioned, this greatest-hits edition does offer the option to do away with a lot of that stress, in the form of an “Assist Mode”. Basically an Easy setting, it gives you more time and pays out more points for completing orders. The game also includes some long-overdue accessibility features, including dyslexia-friendly text, and modified icons to assist colourblind players. For a game that has long and respectfully featured a wheelchair-using character, albeit a raccoon character, it’s a nice and not entirely unsurprising touch. 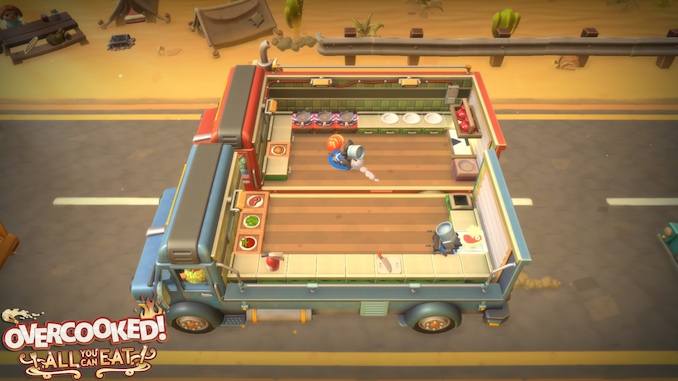 Because Overcooked! is an intrinsically co-op game, and couch co-op at that, it’s a bit strange to see it as a PS5 launch title. As you may have heard, these consoles are notoriously hard to come by, and anyway not all your friends are going to be buying PS5s for a while yet. The developers have promised that a post-launch update will bring cross-platform online multiplayer, which I take to mean PS5-to-PS4 crossplay, but that’s not out yet, and the timeline is fuzzy. Meanwhile, I’ll mostly be sticking to my PS4 version because that’s where my friends are.

That said, there’s a certain masochistic pleasure to be found in Overcooked!‘s one-player mode, which sees you swapping back and forth between chefs while trying to handle eighteen-thousand simultaneous tasks all while your kitchen is, almost certainly, burning down. By Level 2, my brain was already broken. By the time I achieved a kind of DualSense-induced transcendence during the upper levels, I had become one with the tomato and the tomato was us.

Visit the official page for Overcooked! All You Can Eat Edition here.