Our review of Cuphead, developed by StudioMDHR. Available now for PS4 (reviewed), Windows, Xbox One, macOS, and Nintendo Switch. 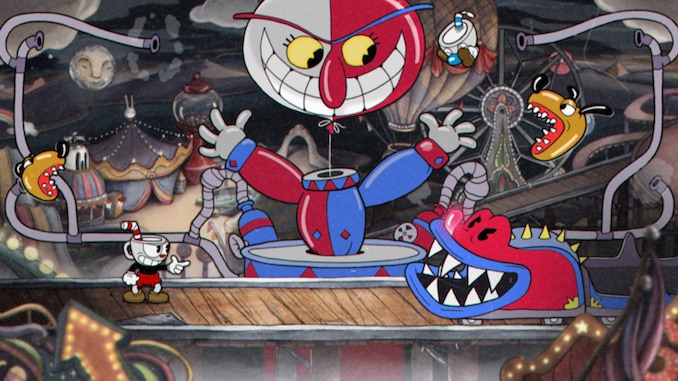 A controller-breakingly difficult “run-and-gun” with a pencil-perfect classic cartoon aesthetic.

It’s one of the best Canadian video games ever made – but it is so very, very hard.

Any gamers looking for a steep challenge. And spectators are more than welcome, because this game is so much fun to watch. 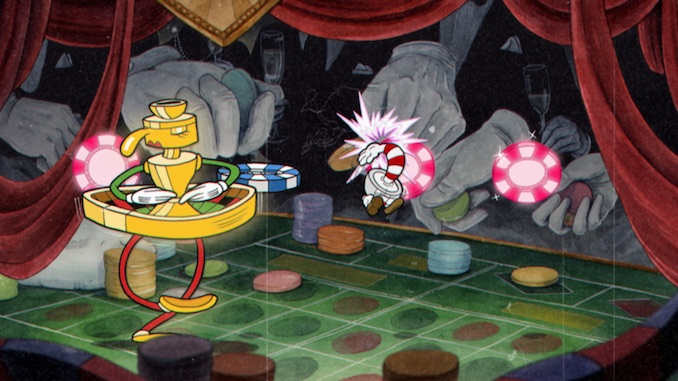 I may be old, and jaded, and cynical, but boy do I love me a good Silly Symphony.

If you don’t know the Silly Symphonies, a series of beautiful and funny Disney cartoons from the 1930s, do yourself a favour and go watch one or two right now. And if you do know the Silly Symphonies… aw, who am I kidding, go ahead and click those links, too. You can never go wrong with a rewatch. I’ll be waiting right here for you when you get back. 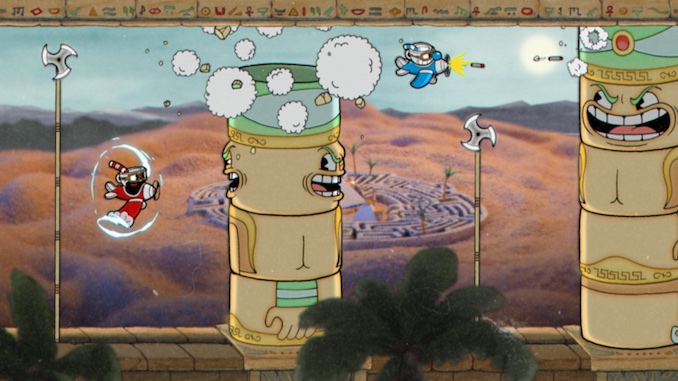 In the 1930s, Disney carved out an odd and fun little cartoon playground for itself in the form of the Silly Symphonies. These cartoon shorts were a place to experiment with visual and sound techniques, test out new technology, introduce concepts/characters (oh hi Donald Duck!) that they weren’t sure would fit with the main Disney brand. As implied by the name, the Symphonies were largely built around music – mostly classical adaptations, though we can also thank them for “Who’s Afraid of the Big Bad Wolf?”

I love the Symphonies, with their dancing flowers, fiddling grasshoppers, and parades of anthropomorphic desserts. I’m also a fan, if with less familiarity, of Disney’s main competitor of the era, Fleischer Studios. But where the Symphonies were typically more earnest and good-natured, Fleischer, home to Popeye and Betty Poop, was better known for the surreal, the more blackly comic, the more “adult” cartoons.

Superficially, Cuphead resembles the best of both studios, with its lovingly hand-drawn animation set against beautiful watercolour backgrounds. However, it does have one key commonality with the weirdest of the Fleischer creations: it may look like a children’s cartoon, but, thanks to its masocore difficulty, Cuphead is far from kid-friendly. 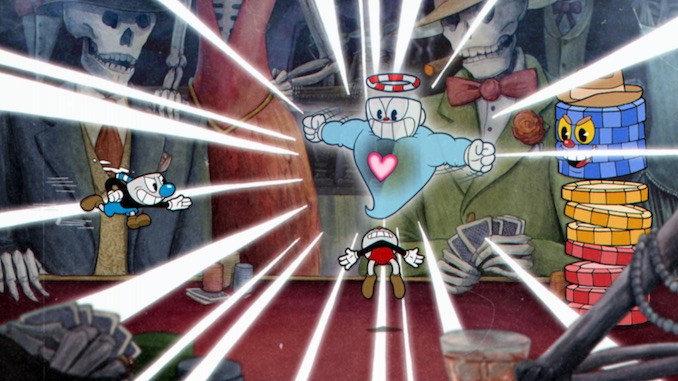 Cuphead is what’s known in video game parlance as a “boss rush.” Eschewing the standard level-progression you’d find in something like Super Mario, Cuphead largely consists of head-to-head battles against increasingly difficult one-off enemies. As I wrote about Sekiro last year, Cuphead is at least as much about skill as it is about pattern recognition: you will die, and you will learn from your mistakes and fight and die and fight again.

Played to perfection, the entirety of Cuphead can be completed in under half an hour. Played like a normal human, however? Well, let’s just say I could have watched every Silly Symphony on YouTube, then ordered the complete Betty Boop DVD box set, waited for delivery, unpacked it, and watched the whole series, and still not have spent as much time as I spent fighting that one *$!%# evil clown in Cuphead.

As my co-op buddy said to me, “Cuphead is a game that you beat once, and then never go back to again.” 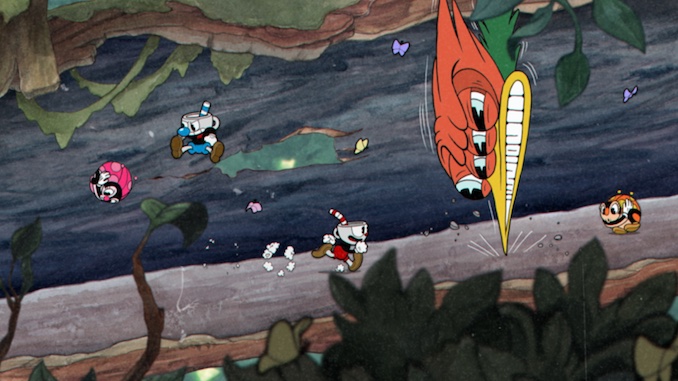 THE TORTOISE AND THE HARE

Cuphead can, and should, be played with a friend. Technically, only local co-op is allowed, in keeping with the spirit of the retro titles (think Contra or Metal Slug) its gameplay is modelled on. However, the brand new PlayStation 4 release (Cuphead has been around on other systems since 2017) does have a workaround: provided you have a fast enough Internet connection, you can use the PS4’s “Share Play” feature to play with a friend online.

I tested Share Play, and let me tell you: I do not have a fast enough Internet connection. And Cuphead is a game that does not suffer imperfect timing lightly.

In many ways, though, our hilariously unfair co-op playthrough was the most fun I had with the game. Even as we failed and failed again, there was comfort in being able to blame the WiFi, rather than our own ineptitude. And in these strange days, a socially distanced gaming marathon (shoutout to my co-op buddy Rohit all the way out in Vancouver) is far from the worst way to spend an afternoon. I’ll take the slow, laggy route to victory over a quicker but less satisfying solo run any time. 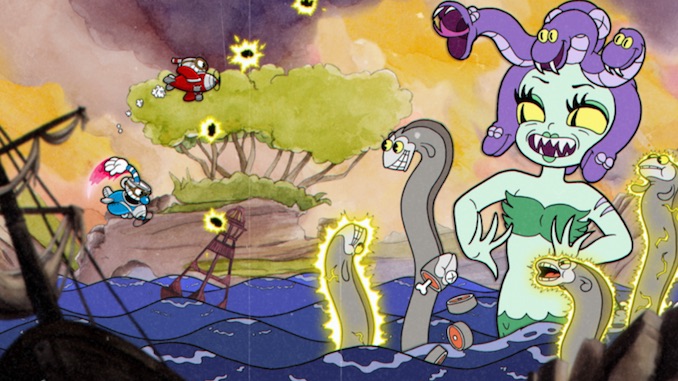 I may be an old, jaded, cynical gamer, fed up with casual mobile games and microtransaction “freemium”, but even I’m tempted to draw the line when it comes to Cuphead‘s toughest challenges. Honestly, there are times in Cuphead where victory is met less with a sense of accomplishment than that of relief.

It’s a good thing Cuphead is so much fun to watch, then. You may well be frustrated with a given battle, but you’ll want to persevere simply to see what the next boss looks like. Whether it’s an angry vegetable garden, a pair of boxing frogs, or a loving recreation of your all-time favourite Silly Symphony, the Cookie Carnival, there’s always something fun to watch, some new and lively animation to enjoy.

Plus, Cuphead is so obviously a labour of love that it’s hard to ever get too annoyed at it. The hand-drawn animation – the swervy lines that bounce and undulate, the comically expressive faces, the way that Cuphead’s co-op partner Mugman drinks his own brain-fluid out of the straw that sticks out of his head – it’s all so full of character, so true to the Disney/Fleischer spirit, that even after 577 and 798 and 1,000 deaths you’ll still want to come back for more. The jazzy big band-style music is also great – just be sure to pay attention to Mr. King Dice’s Theme, playing in the background of the Die House.

Cuphead, the game that looks like a classic cartoon but devours your imaginary quarters like a retro run-and-gun, is my favourite game of the year. It’s beautiful, and difficult, and kooky, and funny, and, in its latest PS4 iteration, a great way to hang out with distant friends.

Cuphead is also Canadian, created by a pair of brothers, one of whom is based in Ontario, while the other lives in Saskatchewan. I wonder if they’ve been Zooming lately. I wonder if they know about Share Play.

I wonder if their Internet connection is better than mine.

NHL 17: The Pros and Cons of EA’s Latest Hockey Game