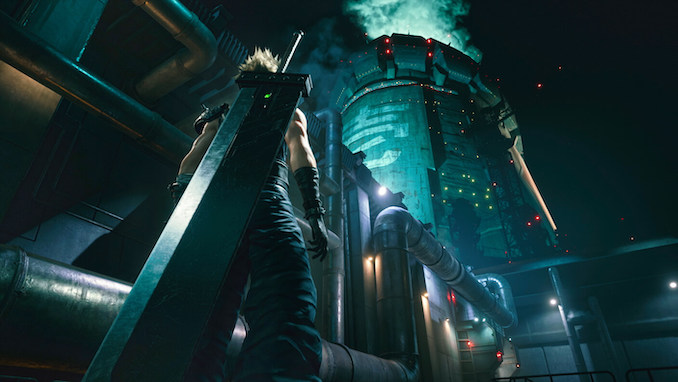 A partial remake of the single greatest JRPG of all time.

With several qualifiers, I’d recommend it to fans of the original, along with curious newcomers. And, like, all of Japan, probably. 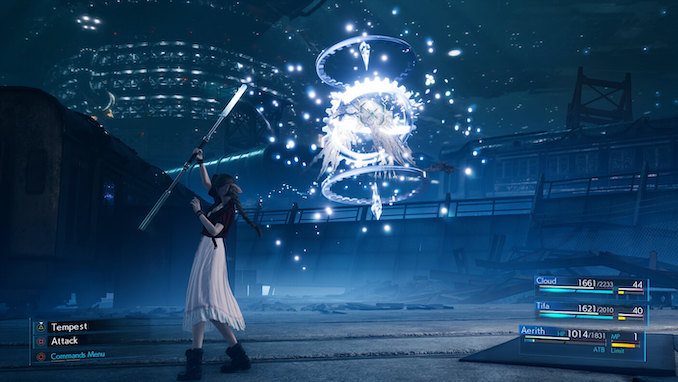 Imagine if JJ Abrams remade Star Wars, except he took only the first twenty minutes on Tatooine, and expanded it to feature length. And now imagine that in this new film, Han Solo is aware of and regularly sings the Star Wars theme. And imagine also that Chewbacca is restricted to a glorified cameo, while Darth Vader just kind of inexplicably appears midway through, with no real explanation of his motivations or why we should be intimidated.

Would this new film still be Star Wars? Yes. Would it be good? Well, yes, insofar as a partial Star Wars remake could capture the spirit of the original.

Would it be worth your time?

Welcome, friends, to the paradox that is Final Fantasy VII Remake.

Final Fantasy VII (1997) is the best Japanese RPG, or JPRG, ever made.

Others, who are wrong, will disagree. They’ll have their own favourites, other classic JRPGs, including several in the long-running Final Fantasy series itself. I am partial to some of these arguments; I think Final Fantasy X (2001) is a minor masterpiece with an even better soundtrack than FFVII’s, and I think EarthBound (1994) is such a unique and, yes, funny experience that every gamer owes it to themselves to play it.

But FFVII is simply the best. It has a more thrilling, dynamic, and interesting world than any other JRPG. It has memorable characters who are more than two-dimensional (and yes, that’s partly a graphics joke). It is quirky and utterly charming, with a healthy sense of humour about itself that’s too often lacking in video games. It also has a fascinating story, one that’s nuanced, subtle, and subversive: among other things, FFVII is one of the first video games to ever lie to the player.

And before anyone shouts rose-coloured glasses: I first played FFVII only about six years ago, so I come by this opinion honestly.

As for the remake, read on.

Final Fantasy VII Remake is, more so than its 1997 inspiration, the story of one city. That’s by design: the remake covers only the opening chapter of the original, and is constrained to a sole setting, Midgar. A massive super structure that looms over the planet, Midgar is a beautifully realized cyberpunk city that also serves as the game’s central metaphor: it’s a place where the wealthy live in luxury above, and the poor live in their literal shadow in the slums below.

FFVII wears its Star Wars influences on its sleeve. It’s a story of rebellion, a ragtag group of heroes up against a big bad, in this case the mega-corporation Shinra. There’s a looming threat of planetary destruction. Characters named Wedge and Biggs play small but significant supporting roles. The primary protagonist is a blonde kid with a cool sword and a healthy dose of the no-parent blues.

Unlike Star Wars, FFVII also carries an explicit environmental message. The evil corporation is sucking the planet’s resources dry, and the heroes are clearly meant to be eco-terrorists. Final Fantasy being, well, a fantasy, the planet has an actual personality, has given “birth” to children (including some very Tolkienesque monsters), and its “lifestream” has certain magical properties that form the core of FFVII’s story and gameplay. 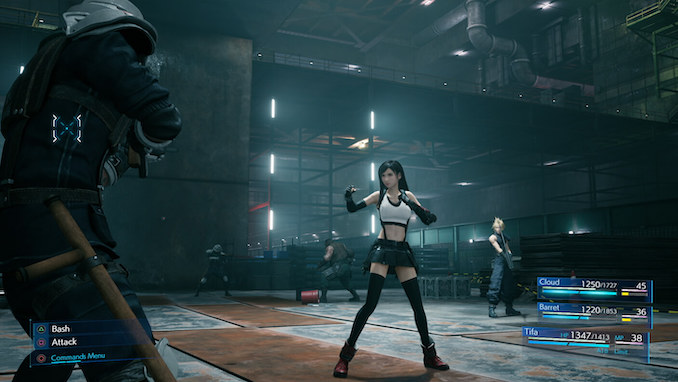 On its own merits, FFVII Remake is a really good game. The turn-based combat of the original has been replaced with an action-forward combat system, one that can be paused mid-battle to trigger certain abilities, accompanied by a very cool super-slow-motion effect. The story is exciting, establishing suitably high stakes that should reverberate through several planned sequels. The newly re-orchestrated soundtrack, deservedly famous in the video game pantheon, sounds amazing.

That said, while the updated visuals are impressive, there are some disappointingly rotten graphical elements for a 2020 PS4 game. Why does everyone’s face have an artificial plastic sheen to it? Why do non-player-characters only pop into existence at the last second? The anime-infused cutscenes, obviously inspired by the over-the-top madness of the FFVII movie Advent Children, are also a bit too much for my liking. There are times when I longed for the blocky charm of the original. 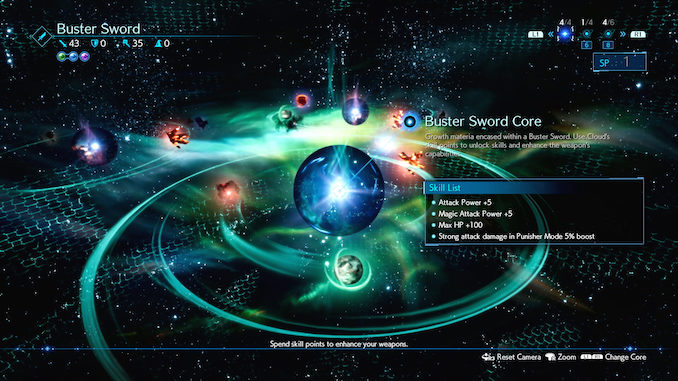 Speaking of longing for the original…

Where FFVII (1997) was an expansive, world-spanning adventure in the Lord of the Rings or Star Wars vein (just check out this world map!), the remake’s 1/10th of a story makes for a fundamentally flawed experience, one driven more by financial reasons – why make one remake when you can sell ten? – than artistic ones.

Because the entirety of FFVII Remake is localized in Midgar, the game suffers for lack of diversity. There are fewer locations to explore. There’s really only one story to speak of, instead of the interwoven narratives of the original. There are fewer characters to control. Admittedly, the ones you get are the most iconic – Cloud, Barrett, Tifa, and ultimate waifu Aerith – but you may still find yourself wishing for others, not least for the gameplay opportunities they represent. The late-game arrival of FFVII’s Chewbacca-equivalent is particularly frustrating, accompanied as it is by a “sorry, you cannot control this character” chyron.

Gone too is a lot of the quirkiness and charm of the original. Most of the humour is missing, save for some extremely lazy fat jokes and one (in)famous undercover mission. FFVII Remake is also painfully linear, stripped of the secrets and the joys of discovery that were present in the open world design of the original.

Other remake choices are more baffling: one key character shows up for literally five seconds, a blink-and-you’ll-miss-it cameo that would make no sense to someone who has not played the original. Materia, the magical resource that grants you special abilities, is freely available in vending machines(!), rather than acquired through exploration or plot development. Meanwhile, Sephiroth, the villain with the fantastic theme music, is never really explained: he just sort of shows up mid-game, looks cool, and expects us to be impressed. What are his motivations? Why should we care? The game never bothers to explain, relying more on gamers’ familiarity with the (admittedly iconic) character than bothering to tell a good story with him.

True, newcomers to FFVII may not spot all the omissions, but they will likely feel their absence. FFVII was never supposed to be a one-city story, and given that Square Enix still hasn’t committed to how many more “parts” this Remake will entail, I’d be cautious about buying into such an incomplete experience, at $79.99 per game, no less. 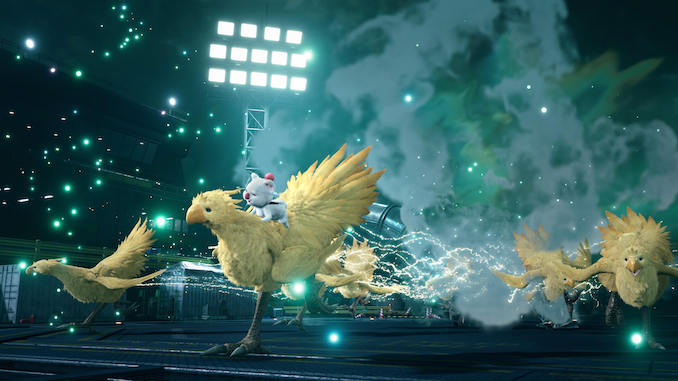 LURKING IN THE DARKNESS

Although FFVII is mostly indebted to Star Wars, the Tolkien comparison is perhaps more apt. Remember how Peter Jackson carved up The Hobbit, a slim children’s novel, into a three-part CGI extravaganza? (My apologies if you’d chosen to forget.) Nobody who has read The Hobbit would expect to wait three films and nine hours for Smaug. Similarly, nobody who sits down to play FFVII would expect to get stuck in its first chapter for an entire 40-hour game. Flawed (read: pecuniary) reasons made this happen.

Like many a JRPG before it, FFVII Remake also ends poorly, in a confusing jumble of last-minute reveals, infuriatingly unfair boss fights, and (shudder) unskippable cutscenes. I’ve played more than a few JRPGs in my time, but what was acceptable in, say, 1997, is simply unforgivable in 2020. On that note, I’d be happy if the following archaic elements were also banished to the dustbin of history: mediocre English voice-acting (do yourself a favour and switch to the Japanese), progress-halting difficulty spikes, and, most egregiously, the game’s omnipresent male gaze, which manifests in some ill-advised female character design and insulting camerawork.

To its credit, FFVII Remake does introduce some narrative wrinkles, including a brand new central dynamic that throws into question the whole remake exercise, but in a good way. Still, it’s hard not to escape the feeling that we’d all be better off just playing the original – which, if you don’t have a PS1 handy, you can still download on PS3, Vita, and PSP.

I don’t normally do this, but for what it’s worth, I score FFVII Remake as follows:

I was always a sucker for simulation games of any kind. Im kind of that guy, I like realism – […]