Our review of God of War Ragnarök, developed by Santa Monica Studio. Available November 9, 2022 for PS5 (reviewed) and PS4. 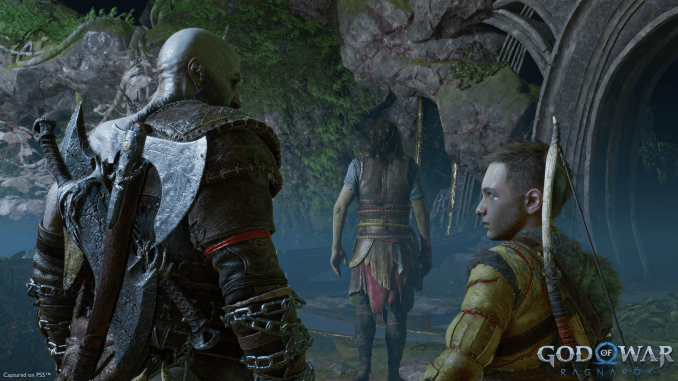 It is a very good continuation – that’s continuation, not evolution – of the excellent framework established by its predecessor. 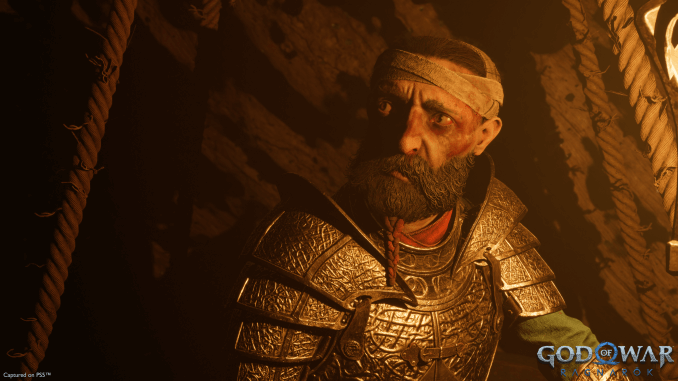 Only the second topless-axe-wielding-Nordic-warrior blockbuster this year, God of War Ragnarök is an enjoyable, if dispiritingly samey, entry in the long-running PlayStation franchise. Fans of the excellent PS4 God of War sequel-cum-reboot will find themselves at home with this game, which picks up right where its predecessor left off. And I do mean right where it left off, relying on more or less the same gameplay to pick up on a multitude of story threads from Kratos’s last go-round with the Norse gods.

It’s an approach that guarantees a good time – why mess with a winning formula? – while also failing to innovate in meaningful ways. It’s also an approach that expands upon the many plot threads established (and in some cases, left unresolved) in the last God of War, while simultaneously demanding that players recall minute details – events, locations, relationships, even individual items – without providing the necessary refresher.

Players new to this modern Kratos odyssey will be at a loss, and should hold off until they’ve played the previous entry. Players returning after a four-year absence will find the game’s brief “last time on God of War” only superficially helpful. One recurring problem in Ragnarök, a game that bandies about words like “Svartáljǫfurr” or “Modi” as if they’re household names, is that players will regularly feel like they’re missing something significant.

That said, those interested in the fallout from God of War (2018)’s late-game revelations will be relieved – or, depending on your level of emotional investment, concerned – to hear that Ragnarök is just as much, if not more so, the story of Atreus, the half-god/half-giant son of Kratos. Carefully tip-toeing around spoilers, we can tell you that Ragnarök grapples in interesting and exciting ways with the fate of Atreus, and his complex relationship with his father. This slightly more mature Atreus, who has aged in real time in the intervening years, is the beating heart of this game. 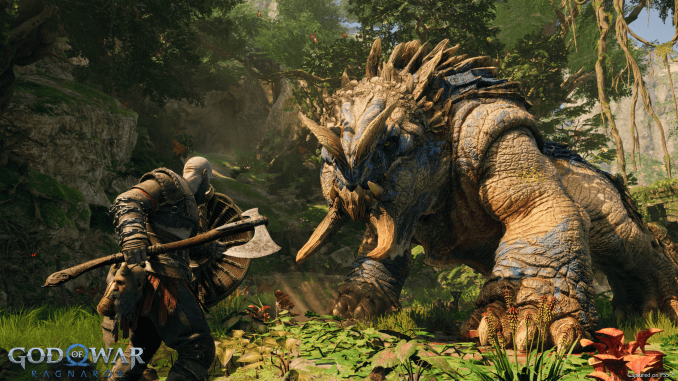 God of War (2018) began with some random American dude showing up at the door of protagonist (and ex-Greek god) Kratos, itching for a fight. It turned out that said angry American was none other than Baldur, Norse God of Light, son of Odin.

God of War Ragnarök begins with some random American dude showing up at the door of protagonist (and ex-Greek god) Kratos, itching for a fight. It turns out that said angry American is none other than Thor, Norse God of Thunder, son of Odin.

This is a pattern that persists throughout Ragnarök. Once again, it’s the story of an angry bald dude taking on a succession of cruel, vain, self-serving gods. Once again, it’s a story of father-son bonding – Atreus may have aged a few years, but is otherwise the same kid, with the same hot-headed personality – set against a backdrop of brutal combat. Once again along for the ride are a talkative severed head and a pair of loveable, foul-mouthed dwarfs.

There’s more. Kratos and co. again use “bifröst” to travel the “realms” (including many returning locales from 2018) to gather resources and allies as they take the fight to Odin and his extended family. As before, there are elves, trolls, and dragons to slice and dice and freeze and blast and otherwise grind into magical dust. Combat is entirely unchanged, relying on a combination of Kratos’s bare fists, the legendary Blades of Chaos, a wicked cool Thor-style axe, and an AI-controlled “combat assist” in the form of bow-and-arrow-wielding Atreus. Mild efforts to shake things up – an additional playable character, more AI companions – don’t really do much to deviate from the formula.

Again, this is a very good formula, and far be it from me to criticize a game for failing to shake things up. But there’s something disheartening in waiting four years for the next, next-gen, entry in one of the greatest action series of all time, only to find that it largely plays like a (very long) expansion to the game that came before. After the previous God of War left Greece behind in favour of Nordic mythology, Ragnarök could have gone literally anywhere, something which the previous game even hinted at. That we are back in the same mythological milieu, traversing the same environments, fighting many of the same enemies (with suspiciously familiar animations), seems like a misstep in a series not known for its missteps. 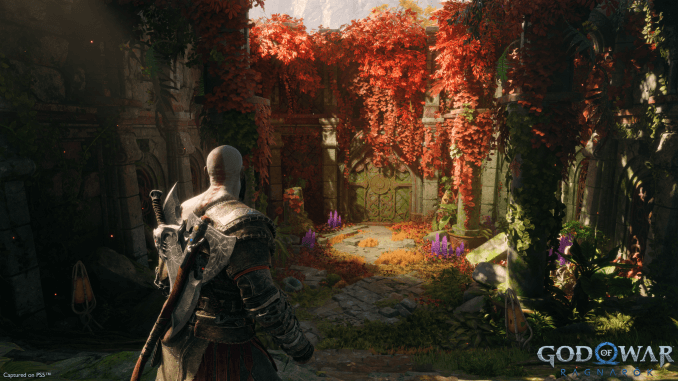 Ragnarök, which, depending on how you look at it, is either the second in a new series or eighth overall, is a worthy inheritor of the God of War name.

Playing as Kratos, an ex-Spartan soldier and one-time Greek god of war, you traverse a series of beautifully rendered Norse-themed realms – Midgard, the Land of the Elves, that sort of thing – fighting monsters, all while contending with the increasingly hostile machinations of the Norse gods, known as the Æsir.

In the last God of War, that meant encounters with the likes of Freya, Baldur, and the Valkyrie. Ragnarök, which takes its name from the god-destroying calamity of Norse mythology, ups the ante with none other than the one-eyed All-Father, Odin himself, while also finding time for Thor, Heimdall, and others familiar from the Marvel Thor movies and/or Wagner’s Der Ring des Nibelungen. (Tolkienites will also find much to love here.)

The main story – which, again, relies far too much on players’ half-remembered knowledge of a four-year-old game – is compelling enough, with a much-appreciated and rather unexpected emphasis on wildlife, including several beautiful – and beautifully rendered – giant animals. I love the giant wolves, bears, and other megafauna that populate this game, which sets a new standard for believable digital representations of our animal friends.

Outside the main story, many of Ragnarök‘s best moments come from its universally excellent sidequests, which nearly all contribute to the narrative in interesting ways and/or offer intriguing rewards. And even though some of those sidequests contain nasty difficulty spikes, the option to temporarily tweak difficulty means players will never get frustrated.

Combat in Ragnarök is solid as ever, encouraging players to mix up weapons and special abilities to reduce enemy’s health and stamina bars. Impressively, the emphasis on the latter – whittling down stamina until you can activate a one-hit finishing move – means that going bare-knuckle, with blunt, stamina-depleting melee attacks, is a wholly viable option. Whatever loadout you prefer, most battles are a balance between dealing straight damage and triggering those finishing moves. Though, as in the last game, the canned animations get awfully repetitive awfully quickly.

Returning also from God of War is the gimmicky “tracking shot” presentation, which is meant to give the impression of a single, uninterrupted camera shot from start to finish. Honestly, the lengths to which Ragnarök goes to simulate an uninterrupted take are absurd, not to mention regularly undermined by the way the game “whites out” during level transitions. I remember when Jak & Daxter did the same trick back in 2001. It was cute then, it’s unnecessary now. (Not to mention, the tracking shot gimmick makes the whole game feel like it’s being filmed by a particularly grim Lakitu.) 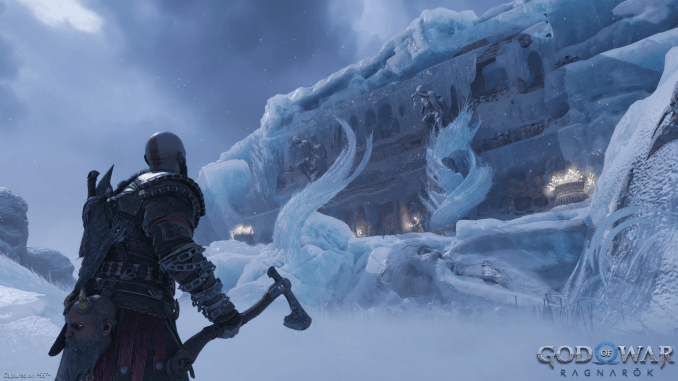 Ragnarök echoes a few other mistakes of its immediate predecessor.

As before, the balance between serious family drama and over-the-top violence is not always handled well, and I could not help but laugh at lines like, “we do not seek war” (said by one god of war to another), or, “you know, she’s not a monster” (said about a literal monster). That said, the ongoing dialogue between characters is terrific, and it never ceases to impress me how the non-player-characters will react dynamically to what I’m doing: “Oh, you’re going over there now?” “You really need that treasure so urgently?”

The voice acting is also very good, though there are some weaknesses, beginning with the distracting decision to cast almost exclusively North American-accented actors. (You’d think at least one god wouldn’t sound like they came out of the American Midwest.)

Also distracting is the performance by Richard Schiff as Odin. Schiff is a respected character actor, but his thin voice is ill-suited for Odin, a role that requires the gravitas of an Anthony Hopkins or a Bryn Terfel. Danielle Bisutti, who was quite good as Freya in God of War, surprisingly flubs much of her delivery here, including an unfortunate tendency to pronounce Kratos more like “Kray-dos”. On the other hand, both Kratos (Christopher Judge) and Atreus (Sunny Suljic) benefit from strong performances, as does the dwarf Sindri (Adam John Harrington), settling comfortably into the role of loveable uncle.

Ragnarök further repeats its predecessor’s mistake of making its “nine realms” feel small. For all the noise this game makes about realm-travel – recall that just one realm, “Midgard”, is supposed to represent our entire planet – you never get a sense of the scope of each location. Each comes across as a small, self-contained area with a particular environmental theme: jungle land, snow land, etc., not unlike in a Super Mario game.

In fairness, some of these realms are stunning, the best and most lifelike environments ever rendered in a video game. Others, however, are garish and so overstuffed with detail that they appear less realistic as a result. (The closest comparator I can think of is the production design on James Cameron’s Avatar.)

Perhaps the thing that best encapsulates the paradox of God of War Ragnarök is the way it handles its second playable character. From a narrative perspective, the decision to re-centre the narrative on this other character (no spoilers!) is fantastic. I’d argue that the sequences where players do not control Kratos – including lengthy periods where he is entirely absent from the game – are some of the best in God of War history. At the same time, the game’s habitual failure to distinguish this other character only underscores Ragnarök‘s conservative approach to iterating, but little improving on, what came before. “Not-Kratos” controls the same as Kratos, with effectively the same moveset. Not-Kratos has different AI companions, but those companions function identically to Kratos’s – down to the only real difference being the colour of their magical attacks.

Most frustratingly, despite the game repeatedly telling us that this other player-character is suppposed to be less experienced and weaker than Kratos, Ragnarök whiffs on every opportunity to highlight that difference. Case in point: one of the best jokes of 2018’s God of War was how, following years of prying open treasure chests back in Ancient Greece, the older, more jaded Kratos now simply punches a hole straight through them. By having Ragnarök‘s second, “weaker” character basically do the same, the joke is spoiled. It also demonstrates a lack of imagination for a series that, much like Kratos himself, is getting a little long in the tooth.

Visit the official website for God of War Ragnarök here.

Last weekend, I had the good fortune to be invited out to AFK Con 2015 in Guelph, a new convention for adults […]