Our review of The Blackout Club, developed by Question. Available now for PS4 (reviewed), PC, and Xbox One.

A mediocre and confused attempt at co-operative survival horror.

With the right group of friends, the right suspension of disbelief, and the right amount of patience – maybe. But then again maybe not.

Fans of Stranger Things who are also possessed of a great deal of patience. Gamers with 2-3 like-minded friends who all have online gaming accounts, since there’s no local co-op.

On paper, The Blackout Club is everything I want in a video game. Cooperative horror that pits a group of underpowered teenagers against malevolent forces taking over a small town? Sign me up.

Unfortunately, in practice, Club is both confusing to players and confused about what it wants to be. It’s a disappointing outcome for such a promising concept, and a reminder that when you pay homage to the greats, you’d better get it right.

It’s sufficiently spooky, and there’s a scary invisible monster that you can only “see” when you close your eyes, for which there is a dedicated button. Pressing that button reveals an alternate dimension of black and red, where you can’t really make out details of the physical world, but hidden clues pop out and point you in the right direction. It’s neat.

The tutorial also does a decent job of setting up the mythos: strange things are happening at night, adults are turning into aggressive sleepwalkers with superhuman strength, and only a band of resourceful teenagers can hope to solve the mystery and save everyone’s lives. It’s the ideal setup for an 80s horror tribute, and I honestly loved everything about it.

But that’s just the tutorial.

Once you’re (awkwardly and abruptly) tossed into the online lobby, the game loses a lot of its appeal. Part of it boils down to the fact that this supposedly co-operative game does a very poor job of encouraging cooperation. In some ways, it’s actually two games: the one that you play with your friends, where there’s a hope of coordination, and the one you play with random strangers online, and we all know what random strangers are like.

That first category works better. If you have enough interested friends, with whom you can talk and coordinate and take on different specialties (lock-picking, medic, that sort of thing), there are moments where Club feels like a proper stealth/horror team-up. On the whole, that game isn’t bad, even though it suffers from some serious identity problems, as I discuss below.

But playing online with strangers is just a mess. Even joining a game is a headache: you might try two or three times to jump into a seemingly open session, only to be booted because someone else took your slot. Even worse, you’re often randomly thrown into the middle of a mission, spawning far from your teammates, and at a loss as to how to catch up with them. That’s a fatal flaw for a game that relies so much on secret entrances and hidden paths. 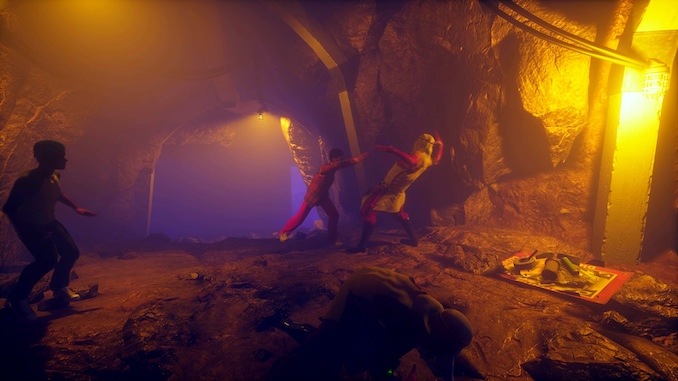 The first is that The Blackout Club doesn’t know what kind of multiplayer game it wants to be. Although it advertises itself as cooperative, and there are some benefits to cooperation, very little of it feels capital-N Necessary. For most of my play time, players each just ran around and did their own thing, rarely if ever bothering to coordinate their approach. Other players are at worst a nuisance that get in the way (and recklessly draw enemy attention), and at best they’re somebody to call for a revive when knocked out. That’s not what I had in mind when I signed on for a co-op adventure.

The Blackout Club also doesn’t know what kind of a horror game it wants to be.

On the one hand, Club leans into the idea that the heroes are powerless teenagers. You’re given limited combat options, and there’s no real way to permanently incapacitate an enemy. Indeed, there’s no melee button at all.

On the other hand, the Club embraces the same godawful grind-heavy upgrade system that’s become all-but mandatory for contemporary online games. Players who play and grind for longer have access to more and better abilities, which in a game like Blackout Club just further reduces the need for teamwork.

It also means that when you first begin playing, your combat options are pathetic. I reviewed Blackout Club with a friend whose gaming choices are generally more combat-heavy. He was legitimately confused why the crossbow could only carry one arrow. I don’t blame him.

Frankly, I wish developer Question had just taken a stance on what kind of game they were trying to make. A game that truly lacked meaningful combat options – as in Fatal Frame or some of the recent arthouse horror titles like Layers of Fear (see my review) – might have actually encouraged cooperation. Alternatively, something that equipped you with proper weaponry – remember Left 4 Dead? – might have worked as a kind of spooky online shooter with a fun 80s horror theme. Instead, The Blackout Club falls awkwardly in-between, offering some combat options and some co-op elements, like a broken version of one of the later co-op Resident Evil titles. 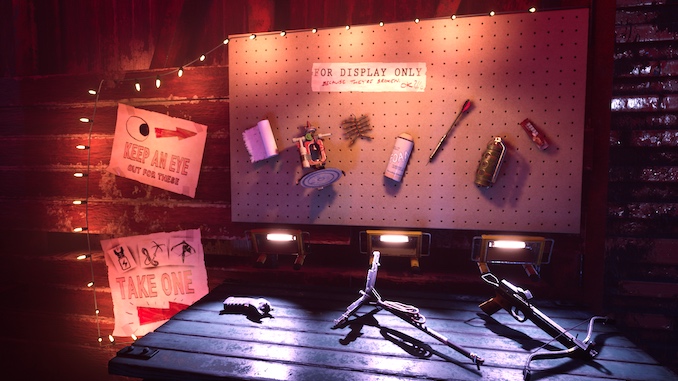 I love horror games. I love co-operative games. I wish that The Blackout Club had more clearly committed to either category, instead of landing on an awkward mess of grind-heavy pseudo-combat, with little impetus for cooperation. It’s an identity crisis that undercuts what might have been a fun riff on classic 80s horror.

Visit the official page for The Blackout Club here.