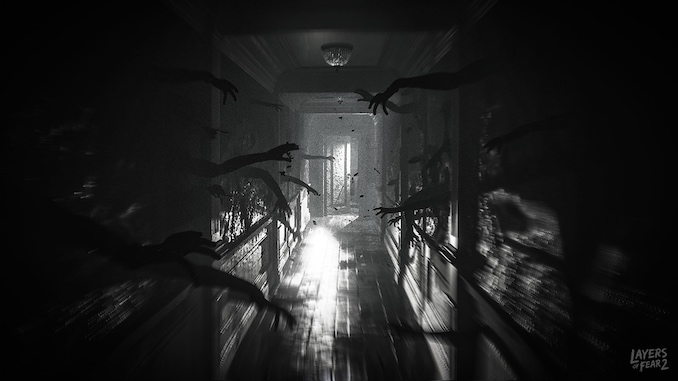 It’s fun, though disappointing in that it’s more creepy than genuinely frightening. 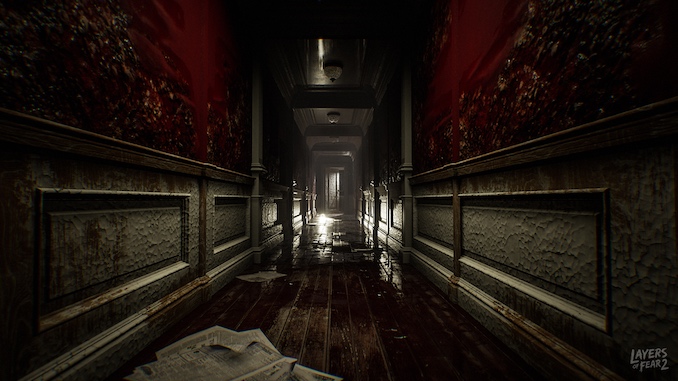 There has lately been a surge in popularity in what might be called haunted house video games. Titles like Slender Man, Amnesia, and the Toronto-set SOMA all tend to have certain things in common: a first-person perspective, spooky/decrepit environments such as hospitals, insane asylums, or creaky Victorian mansions, a plethora of jump scares, and, significantly, player-protagonists with little-to-no ability to defend themselves.

Whereas traditional survival horror titles like Silent Hill or Resident Evil give players a gun or a crowbar with which to ward off ghosts and goblins, haunted house games are expressly designed around the idea of defenselessness: your hero is alone, afraid, and vastly overpowered by the evil forces that surround them. In many ways, these are the games that come closest to emulating how you or I would actually attempt to survive a similar scenario. Less resourcefulness, more cowering in fear.

One of the best of the genre remains the original Layers of Fear, a game that successfully balanced disturbing aesthetics, mind-bending gameplay, and well-timed jump scares. Sadly, its sequel, out now, pales in comparison – though it does have a few neat tricks up its sleeve. 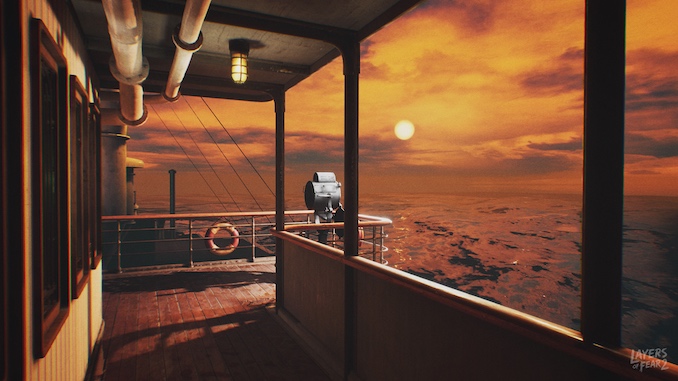 Setting aside the mythos of the original, LoF 2 tells a brand new story involving a washed-up actor (in the original, it was a failed painter) plagued by malevolent forces psychologically torturing him for reasons both annoyingly clichéd and frustratingly enigmatic. Initially, the game sets up a sadistic film director as the game’s driving force, with some early sequences proving the most frightening precisely because of how plausibly they play out, and how little they rely on otherworldly elements. There’s little here that couldn’t plausibly be arranged by a sadist with a penchant for used film sets and simple robotics. In many ways, it’s the most “haunted house” of the haunted house games, at least in the early goings.

That the game later abandons this for an increasingly supernatural approach is both a major weakness – once everything is spooky, then nothing is – and also one of its strengths: there are some truly surreal moments in LoF 2, ones that could only work in this medium. 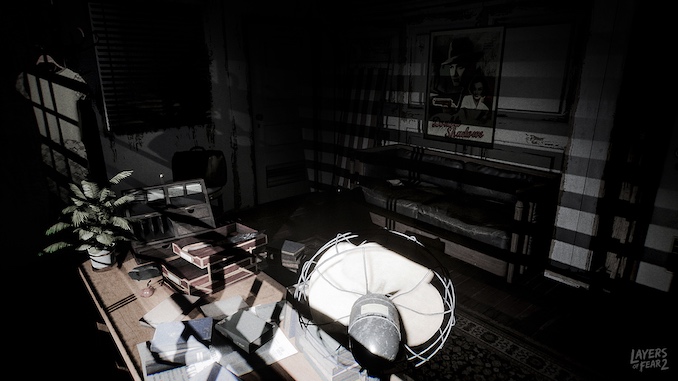 In particular, there are a couple elements that may technically constitute spoilers, but are so central to the experience I’d be remiss to omit them from this review:

First is arguably the game’s main selling point: its many, many (many) references and homages to classic horror and cinema in general. Here’s a quick rundown of just some of the references I caught: Hitchcock (of course), Ridley Scott, David Fincher, Kubrick (naturally), Jean Cocteau, Lynch (no kidding), Willard/Ben, and, pardon the pun, a hell of a lot more.

Some of these references work really well, especially when you turn a corner and find yourself in a twisted recreation of a famous film. (The Wizard of Oz sequence is a highlight.) Others, however, are rather clumsy, as if the developers couldn’t find a good place to work in a beloved film, and so just slapped together a random tableau for the player to stumble across. On the whole, though, these homages add a nice metafictional layer to the whole thing, even if they’re not inherently scary.

The second element: at least 50% of the game, by my count, is in black-and-white. It’s a strategy that was used to great effect in The Blair Witch Project, not to mention in one of the hallmarks of the horror gaming genre, Fatal Frame. Perhaps paradoxically, black-and-white games often appear more lifelike than those in full colour, since the latter more easily reveal their blemishes and unreality. 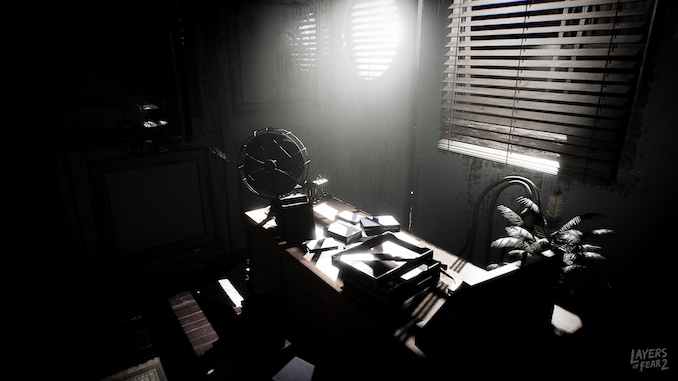 Where LoF 2 really falters is that, in the end, it’s actually not that frightening. I don’t say this as false bravado – I confess to finding the original terrifying – but rather because the sequel simply lacks some of that grittiness and unpredictability which may well have been a product of the lower budget afforded the original.

LoF 1 basically had one trick, but a trick that worked really well: at any given moment, whenever your back was turned, the haunted house could reconfigure itself into new and twisted shapes. Thus, you might find yourself at a dead end, turn around and find another dead end, but turn around again and suddenly the first dead end has been replaced by a totally new and ominous-looking area. Other times, you might get sent down a seemingly endless spiralling hallway, only to turn around and find that the rest of the house has, in effect, snuck up behind you.

Those touches are mostly lacking in LoF 2, or when they do occur, push you along such a linear path that they’re more comforting than scary. With a handful of exceptions, there’s little that’s surprising here.

Where LoF 2 does try to add something new, it mostly falls flat. One of the game’s biggest flaws is its incredibly annoying chase sequences (which were not present in the original). In each of these scenes, a Slender Man-like creature loudly announces itself, chases you through a virtual obstacle course, inevitably kills you on your first attempt, and sends you back to the nearest auto-checkpoint. It’s trial-and-error gameplay at its worst.

That also brings me to another flaw, perhaps the fatal one: there are absolutely no consequences for dying in Layers of Fear 2. In fact, the only “Game Over” screens in the entire game come thanks to those chase sequences, with no penalty other than a quick checkpoint reset. What should be the game’s most terrifying moments are thereby transformed into annoying and unskippable grinds.

Alien: Isolation (unequivocally the scariest video game of all time), figured out ages ago that an insta-death foe is only terrifying if there are real in-game consequences, with that game wisely deploying sparse and manual save points to heighten the tension. The original Layers of Fear, meanwhile, did not even include the ability to die: just as in a real-world haunted house, there was sufficient terror to be found in exploring the spooky and twisted environment, despite any actual existential threat. (SOMA did much the same with its Safe Mode.)

At the same time, one unfortunate carry-over from its predecessor is LoF 2‘s generally bad voice acting, made worse by a melodramatic script burdened by cliché. With two exceptions – impressively, it’s the two child voice actors – the performances in this game run the gamut from awful to high school drama club. In a horror game, there’s nothing that pulls you out of an experience faster than hearing a dreadful voice actor butchering their lines. 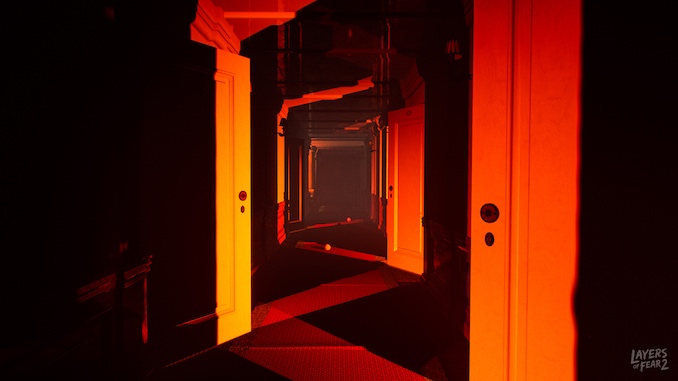 READY FOR MY CLOSE-UP

To be clear, I did enjoy my time with Layers of Fear 2. While I was never exactly scared, I enjoyed, if that’s the right word, wandering through the nightmarish imagery. That’s especially true for the black-and-white sequences, and especially when it comes to the creepily/realistically animated mannequins that populate the cruise ship where the game nominally takes place. (Side note: for a game supposedly set on water and full of film references, where’s my Jaws homage?!)

Factoring in the mostly excellent in-game tributes to classic cinema, Layers of Fear 2 is, ultimately, a haunted house worth visiting.

Visit the official page for Layers of Fear 2 here.