Our review of Streets of Rage 4, developed by Dotemu, Lizardcube and Guard Crush Games. Released on April 30, 2020 for PS4 (reviewed), Microsoft Windows, Nintendo Switch, Xbox One, and Sega Genesis (but only in my dreams). 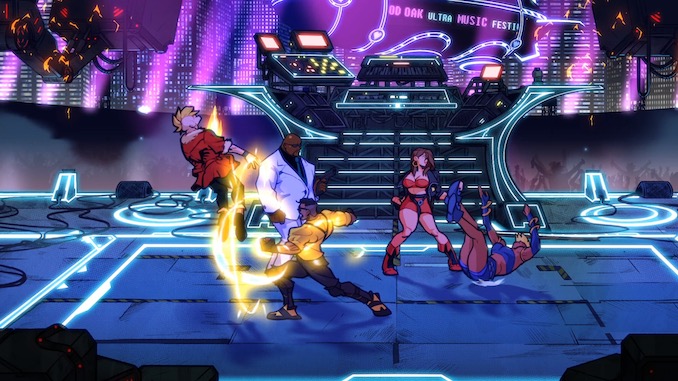 A worthy successor to the classic Streets of Rage trilogy for Sega Genesis.

Welcome to the Next Level.

90s kids. 80s kids. All those young’uns with their tiktoks and the flossing and the whatnot should also play this and learn what it means to be a REAL gamer. 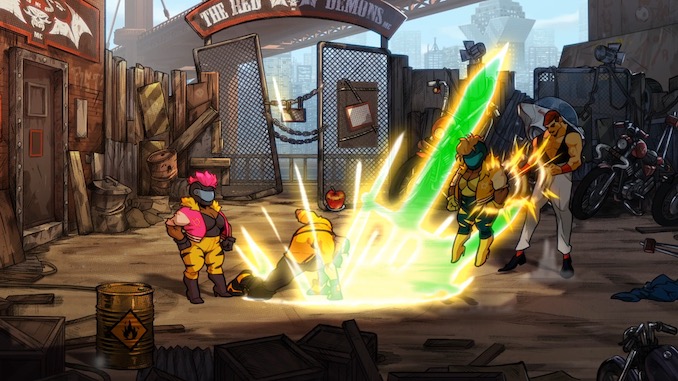 Streets of Rage 4 delivers everything promised in its name: Streets. Rage. “Of”. In other words, it’s a total throwback retro side-scrolling beat-em-up, a direct sequel to the classic 1990s Streets trilogy.

If all of the above makes you salivate, buy this game already. If you’re curious or if you have a vague notion of Sega doing what Nintendon’t, read on. If you’re a modern gamer who doesn’t know what a beat-em-up is, seriously what the heck, but also, this retro classic-in-the-making is a great entry point into the genre. 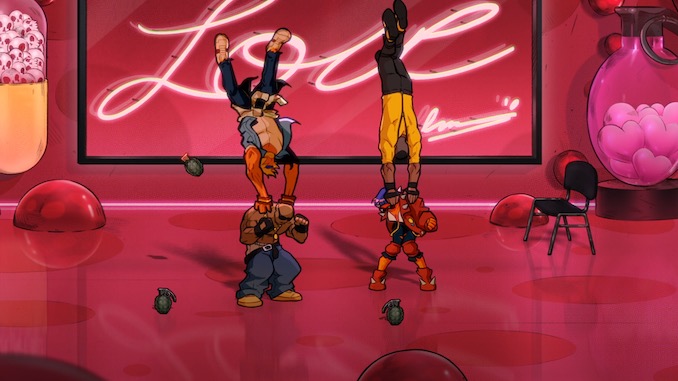 Streets of Rage 4 is a pure nostalgia trip, hitting all the right buttons for jaded old gamers like me.

Like its 16-bit predecessors, Streets‘s plot is gloriously irrelevant, a mere vehicle for its two central mechanics: walking from left to right, and beating up bad dudes and dudettes. Ideally, those things should be done with a friend, either via four player local co-op, or two player online co-op.

Controls are appropriately simplistic: light attack, special attack, jump, and the “pick up” button. Fans will know that last button is key: it’s how you grab any one of the game’s trademark melee weapons (swords, pool cues, etc.), and it’s also how you acquire power-ups, including the famous Floor Chicken.

That said, combat itself is far from mindless: if you have any hope of surviving the tough-but-fair difficulty, you’ll need to understand each character’s strengths and weaknesses, and when/how to use their distinct special moves. That dynamic extends to the variety of themed enemies – the Muay Thai dude, the headbutt dudette, the chick with the whip (no, not that one; not that one either; the other one), etc. – with upwards of a dozen enemies crowding the screen at a time. 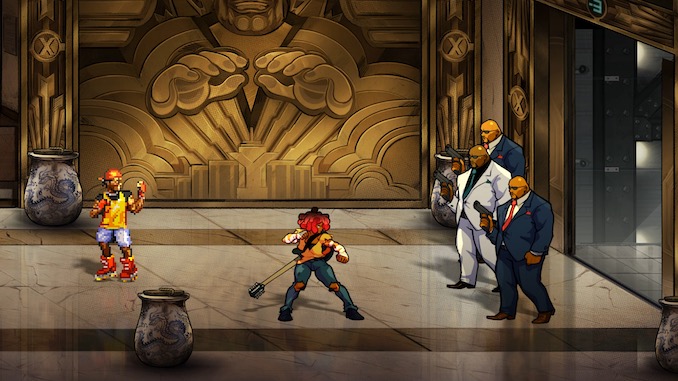 This being a modern revival, the pixel-art of the original has been reimagined in a beautiful hand-drawn style that still captures that 16-bit feeling. And yes, like every other retro revival in recent years, you can activate a filter that puts artificial CRT scan lines on your screen. (Again, if you know what CRT scan lines are, buy this game.) You can also swap out your Floor Chicken with poutine or several other food power-ups, a purely aesthetic choice that’s nevertheless welcome, and hilarious.

Speaking of modern updates, the soundtrack carries on the proud Streets of Rage tradition of being absolutely badass. Legendary composer Yuzo Koshiro is back, having teamed with several others for a new electronica-heavy soundtrack that sounds much like the classics, albeit freed of their 16-bit constraints. Don’t get me wrong: the Genesis-era Streets of Rage soundtrack is perfect – it’s just neat that Streets 4 can now do chiptunes without having to rely on, y’know, actual chips. And don’t worry, at any time you can swap over to the classic soundtrack, though you may have a hard time deciding which you prefer. 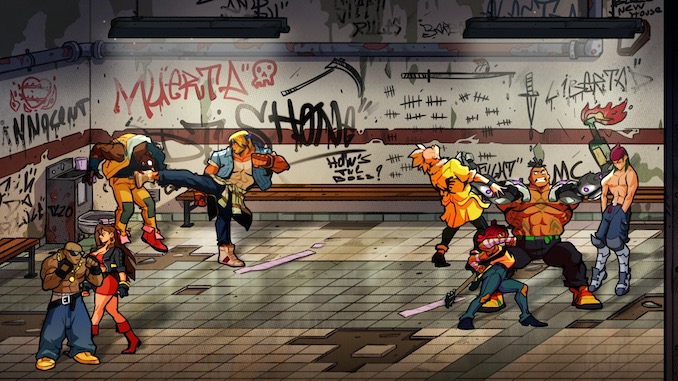 For this review, I called on my good friend and resident Streets of Rage expert Matt Kang (a man who, I am sure, has breakdanced to the Streets 2 soundtrack at least once in his life) in order to capture the perspective of a truly informed gamer. Though our online co-op was marred by significant lag (a problem I will generously chalk up to pre-release jitters), we had an absolute blast punching and kicking our way through the game’s 12 levels, culminating in a ridiculously unfair final boss fight, as it should. Matt was also able to explain to me the various nuances of each returning character, including their unlockable 16-bit incarnations (which, yes, look incredible). I’ll leave it to Matt, a professional journalist, for the final word on this worthy inheritor of the Streets of Rage name:

Visit the official page for Streets of Rage 4 here.

Our review of The Forgotten City, developed by Modern Storyteller. Available now for PS5 (reviewed), PS4, Xbox One, Xbox Series […]