The first annual Toronto Bird Photo Booth Business Challenge competition asked business owners to take time out of their busy summer and set up two motion controlled bird cameras on their property in order to take pictures of the avian species that live in the trees outside their store windows. Seven competitors accepted the terms and entered the challenge. They did it for the birds!. During the entire production and execution of this media monument, Toronto Guardian web magazine faithfully published updates on each challenger, depicting and describing the birds that were digitally represented, the birds of Toronto.

The Toronto Bird Photo Booth itself is an adaptation of Bryson Lovette’s famed contraption, a handsome rosewood bird feeder box with a Styrofoam block insert cut to accommodate an iPhone 5c with the HD Camera motion detector app correctly installed. Secured by rubber bands, the phone is positioned inside a Styofoam cradle inside the feeder with the camera lens facing the silver dish. The signature silver dish was in the foreground of every picture taken by the phone cam, except for the images of waterbirds in the last chapter; when Gary Dorner removed the armature and dish to set the feeder down, right on the ground. Another wildlife camera, a Wingscapes BirdCam Pro was set up on another tripod facing this rig with the same silver feeder dish in the center of the frame. The challenge asked local business owners to set up the devices on their business property to photograph their birds and win prizes and acclaim.

The camera systems were developed by Rob Campbell and David Suddaby of SMOJoe, and Vigorate Digital Solutions loyalty programs donated the website. You can read the very first chapter explaining the birth of the Bird Photo Booth Business Challenge on Toronto Guardian magazine.

Episode One
Paul Peic hosted the Bird Photo Booth at his float home in the Scarborough Bluffs. He got the first ground-breaking shots of a Red Wing Black bird and a Common Grackle visiting the silver bowl. Paul was considered to be a pioneer of the system in the way he positioned the device to get great backdrops and its from his pictures we leaned to always use a white cover to reduce back lighting and thereby get better shots of each bird’s face. Toronto Guardian detailed Paul and his business and showed his best shots in June 2014 as the contest launched.

Episode Two
Vigorate Digital Solution in Toronto hosted week two on a rooftop in Yorkville and after a long and lonely week beside an active construction site, there finally appeared one tiny sparrow in the Wingscapes camera only. The sad account appeared in Toronto Guardian account of Week Two. This was the most downtown shoot of the entire collection and the least attended by birds. This is where the shiny glass towers that dominate the skyline kill birds dead everyday.

Episode Three
John Conn of Standard Telecom business phone systems hosted the bird photo booth in Leslieville behind his corporate headquarters on Laird Dr. John is a man with a vision for birds, and he created a feast for his feathered friends on a picnic table out back, and then set up the cameras to shoot the scene. It worked out great, and he got lots of terrific shots. Some pictures show two or three different species of birds eating together peacefully. You can read all the detail and see pictures of the set up and the birds he got on Toronto Guardian Bird Photo Booth Business Challenge Week Three at Standard Telecom update that was published on 2nd day of July 2014. 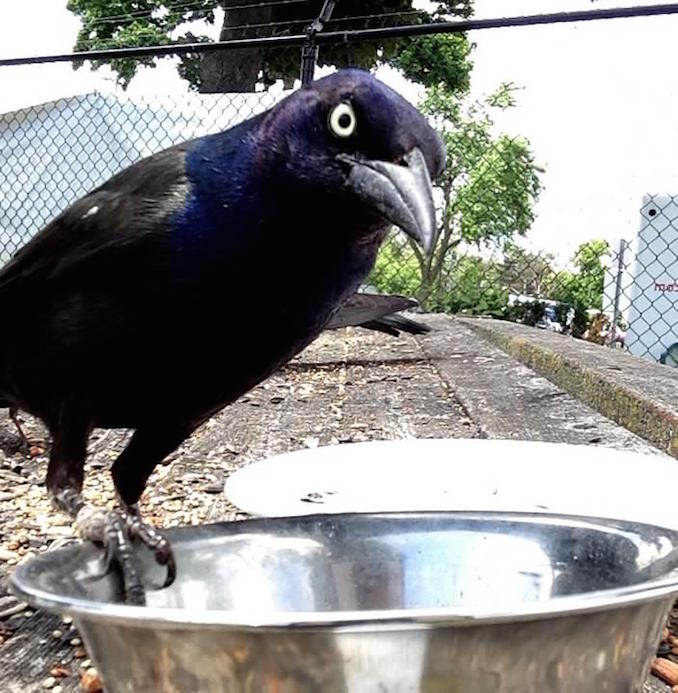 John’s best picture and indeed the winner for the Best Portrait category was his ‘Curious Grackle’.

Episode Four
David Shephard of Jib Strategic Agency in Toronto took the Bird Photo Booth north to a farm in the Rouge Valley near the Toronto Zoo where he was and probably still is building a tiny house in connection with Green Moxie magazine. But sadly, David’s week long tenure was drenched in rain, and he was lucky to get a couple shots of a Mourning Dove out roaming for seeds and worms on a dry summer morning. You can read the whole account on Toronto Guardian Week Four update. Its called a mourning dove because they mate for life, but we discovered in one frame taken with the Wingscapes BirdPro camera that it still has its mate, and so technically its not in mourning yet! 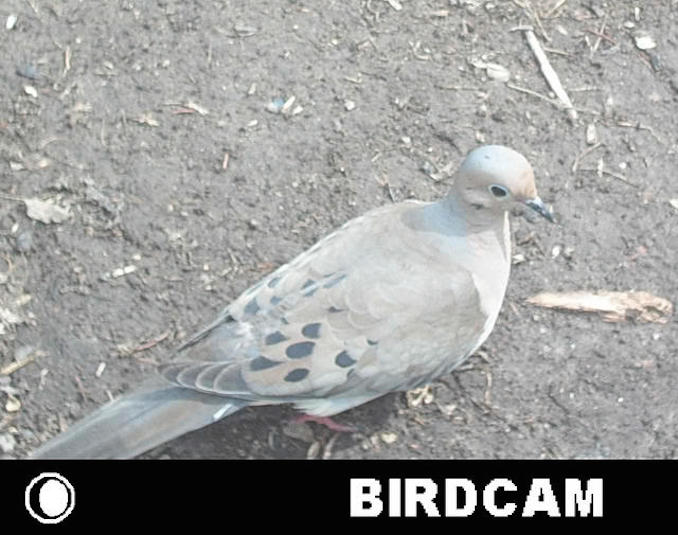 This picture was selected to win acclaim as the Rarest Species snapped by the cameras this summer – Congratulations David Shephard.

Episode Five
Dr Natalie Archer of Archer Dental in Toronto took the booth to her friend’s lush backyard less than two blocks away from her Sherbourne and Bloor St dental office location. She hoped to get some close-up pictures of a wide variety of birds that are frequent diners at the existing feeder, but instead only one ‘bully bird’ filled every frame. Toronto Guradian published this story of a real live Blue Jay who gave a great performance in Week Five. Dr Archer snapped terrific shots of the big blue bully landing and taking off as he ate up all the birdseed in the silver bowl and kept everyone else away.

Episode Six
Dan Sheridan, Principal at TOUGHROOF took the Bird Photo Booth to 700 Queen St West and set it up on a freshly graveled flat roof overlooking the residential alleys behind the building (facing north); his birdseed offering was soon harvested by a flock of rambunctious Queen St sparrows. Toronto Guardian update chronicled the cavorting House Sparrows in Week Six and published pictures of their violent interactions at the silver bowl. 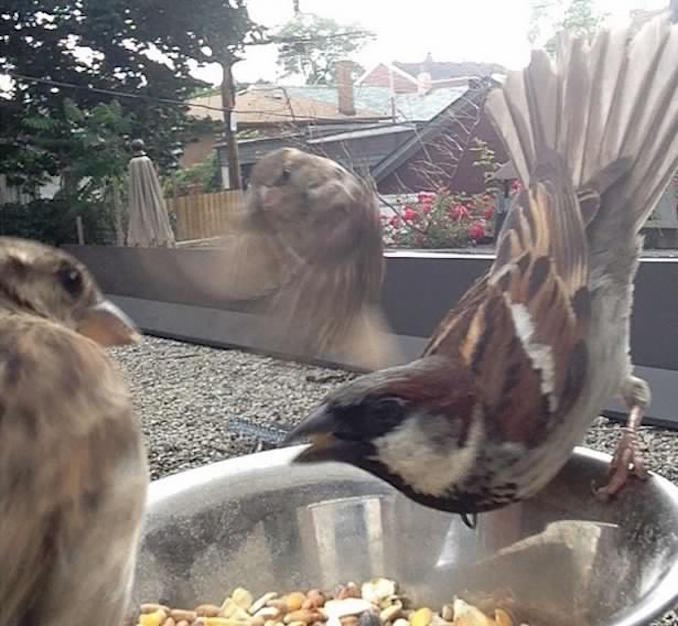 This photo is the winner of the Group Shot because even though it doesn’t have the most birds in the frame – that was a picture by John Conn – it does have three active and emotional creatures attempting to share the bowl.

Episode Seven
Last but not least, in mid September came along a true innovator named Gary Dorner who has a boat on the Toronto Lakeshore and is foreman at Dryshield basement waterproofing. Gary has a passion bordering on obsession for ducks, but he appreciates waterfowl of all types, except seagulls. As a boat owner he listed several reasons why he loathes seagulls.

Gary customized the booths even more than others by removing them from their tripods and taking the silver bowl off the feeder box. He set the motion controlled photography instruments right down on the muddy cement, and with everything turned on he fed the ducks from a loaf of brown Wonder bread. But of course the seagulls came thick and fast and in much greater numbers than the ducks, and Gary was soon swinging the half empty bread bag over the cameras to keep the seagulls at bay so the ducks could feed in front of the rolling cameras. It didn’t work, but Gary won anyway. Ironically Gary won the Grand Prize for this shot called ‘A Cheeky Gull’, a juvenile seagull stealing away his bread and backing up quickly to make a quick get away! The account is described in much greater detail in Toronto Guardian story about Basement Waterproofing business hosting Week Seven, published in Sept 2014. 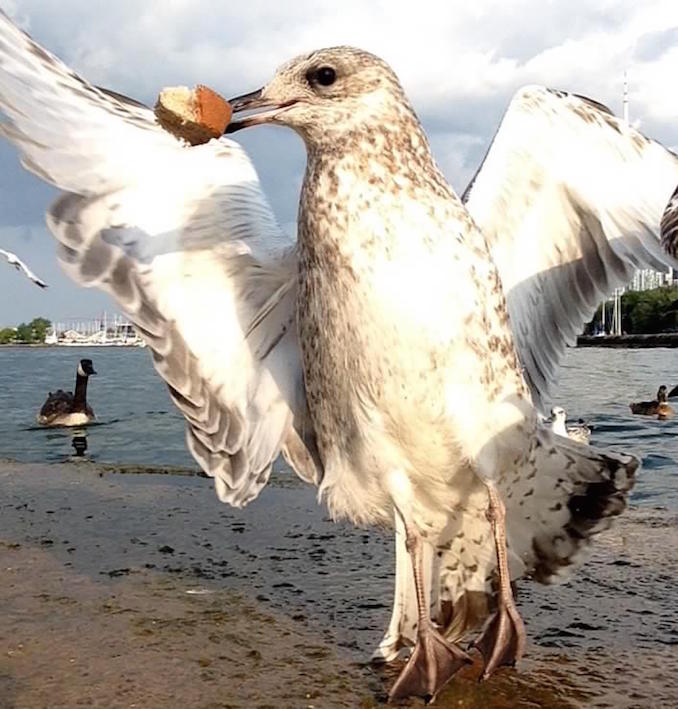 Congratulations Gary Dorner for winning the Grand Prize picture with this shot of a cheeky seagull stealing bread! It wasn’t what he intended but a happy accident. There is no prize except honour and critical acclaim for his imaginative approach.

After seven exciting deployments, the Toronto Bird Photo Booth camera captured images of over twenty different types of local birds and hopefully went some distance to remind Torontonians that wild birds exist in the city to eat bugs and add songs to our urban environment. You can read all about all the deployments and savour the whole Story of the 2014 Toronto Bird Photo Booth Business Challenge on the Birds of Toronto website.

For this Homegrown Business profile we spoke with the folks at frankly, a Canadian premium eyewear company based out of […]

Toronto Bird Photo Booth went to the beach this week! The cameras were set up at various points along the […]