In May 2014 the Bird Photo Booth went out to its first assignment; the booth was deployed by Paul Peic of Paddleboard Addict in Bluffers Park Marina Toronto who set it up on his back porch, which is also his business address. 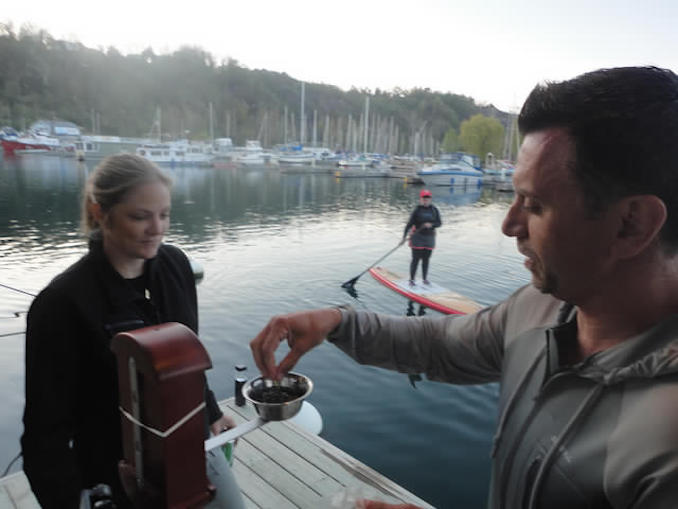 Paul lives at the center of a thriving Toronto Float Homes community, located in the beautiful Scarborough Bluffs, at Bluffer’s Park Marina which is at the very south end of Brimley Rd is on-the-water housing area that’s completely unique in Ontario, Canada. Here are twenty four floating homes – two story and three story houses built on blue barrel composed floats and nestled in a protected cove on Lake Ontario. The village is located only 15 minutes away from downtown Toronto. The car and truck noise up on Kingston Rd above, and the sirens and sounds of the city beyond are blocked entirely by the sandy cliffs north of this sheltered bay. The Scarborough Bluffs also protect the wildlife; itís common to see trumpeter swans, beavers, deer, turtles, salmon and even mink in here.

Float homes are unique because they are not house boats but actual houses on the water. They cannot go boating per say, but can be moved from place to place, and once set up in a secure spot they usually feature a swim out back porch. Paul lives right in the marina close to restuarants and snack bars and boaters clubhouses. There’s a pure white sand beach nearby that is one of the best kept secrtes in Toronto. Look around here and you will see plenty of wildlife. There are many birds around including some endangered species such as cliff swallows, and of course a family of four gorgeous trumpeter swans; the adults are marked with obvious yellow tags to show the world that humans love them and are always watching.

Paul-Peic’s first shot was of this Red Wing Black Bird. This image was taken by the iPhone 5 camera in the Bird Photo Booth unit proper and Paul expected this bird would be the first to visit. Red Wing Blackbirds are among the most abundant birds across North America, and one of the most clever and tenacious animals in the sky. They are a familiar sight around Blufferís Park atop cattails, and on telephone wires. Glossy-black males have scarlet-and-yellow shoulder patches they can puff up or hide low depending on how confident they feel.

Paul’s best shot is this American Crow which is a large bird and we’re happy to see the photo booth held the weight and did not upset or move too much to scare the bird. American crow (Corvus brachyrhynchos) is a large passerine bird species of the family Corvidae, and although common in North America, they are highly susceptible to the West Nile Virus, and as such they’re monitored as a bio-indicator. Fear not, direct transmission of the West Nile Virus from an American Crows to a human patient is not recorded and not considered very likely at this time.

Paul Peic got his ten great shots and so his gallery is complete. Here are the Bird Photo Booth official competition galleries – Paul has a good collection that will be hard to beat. Although Paul has no group shots or images of rare species, he has good curious birds with great facial expressions against a pleasant marina life background scene – well done.

Stay tuned for Week Two. The booth is on the move downtown.

Last week I took a trip down to South-Western Ontario for our latest travel issue. I had been invited by […]

The Toronto Bird Photo Booth flew back downtown last week, right into the heart of the city where it was […]