Last week I took a trip down to South-Western Ontario for our latest travel issue. I had been invited by Parks Canada to attend the annual Festival of Birds that takes place at Pelee National Park in Leamington, Ontario. Point Pelee is part of the park and it, along with Pelee Island, are the most southern points in Canada.

The National Park, and the town of Leamington, are on the coast of Lake Erie which is known for its Perch fish. Many of the restaurants in the area sell the local fish, all with their own spin.

The area is also the capital of tomato production. Miles and miles of tomato greenhouses line this area.

The region thrives off of the month of May, when all the birds return to the park and Birders (bird watchers) from around the world flock to this location to view the large range of birds and their mating rituals.

The trip to Leamington was around 4 hours, which after our last article (driving to Halifax), felt like no time at all.

I got to test the new Honda Civic 2 door which helped a lot on the drive due to the the GPS navigation system as well as a sunroof and XM radio which helps to enjoy the beautiful drive I had down to the park. The one flaw I found was the dashboard was at an angle that when the sunroof shade was open the sun glared over the screen and made it impossible to see. This was the first time this has happened to me in a car and I noticed it as soon as I sat down the first time I got in the car. Other than that the car seemed great on gas. Was around $35-$40 fill-up at $1.15 – $1.25.

I stayed at Pelee Getaway, which is a B&B located on the same road that leads into the Pelee National Park. The B&B is a main floor of a house that has 3 rooms to rent. The room rates range from $75-$95 a night. The house also has a kitchen, a dining room, and a living room for communal use. A great spot to stay to enjoy the surrounding.

Right next door to the B&B there is a Days Inn with a pool, waterslides, games rooms, etc. Perfect if you are coming with a larger family with kids. 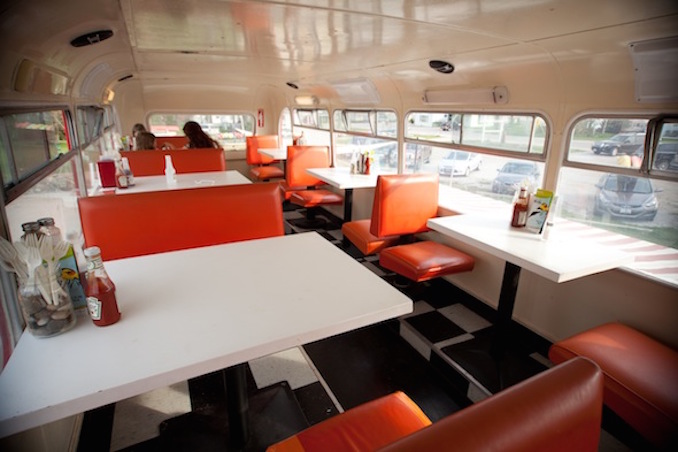 I checked out a few places to eat. Just down the road from the B&B there was a Food Truck that is actually a double-decker bus that has been converted into a food truck called Birdie’s Perch. The downstairs is the kitchen and the upstairs is a dining area. Picnic tables and benches were also set up around the truck. This is one of the spots where you can try the local perch.

If you are looking for more of a dining and drinking experience you can go down the street to Freddy’s Cocktail Lounge and Restaurant. The people here are very friendly. Say hello to Michael and Robert Makhlouf who are the owners. Their famous Perch recipe has received so much attention that it is something you have to try. The restaurant is also attached to an Ice Cream store that is run by the same people. Great for your after dinner treat. The patio here is also a great spot to sit and enjoy the weather and a drink during the day or at night. A good local hangout.

On my last day I went for a press event in Pelee National Park for the Festival of Birds which runs until May 20th. 10s of thousands of people gather in this park for the festival each year. We got a little tour of the park and got to snap some shots of the birds.

It was quite interesting to see all the photographers and birders with their heavy duty equipment. Along the trails you would come to groups of people hovering over a placed scopes to get a view of birds such as Skreetch Owls and Woodpeckers.

Throughout the park and at the Point Pelee there are beaches that you can visit. Many swimming holes and bird watching posts line the parks shores which creates more than a days journey. One could spend a couple days in this park alone.

As for the area around Leamington there are a few options. I visited Windsor, Ontario which was just 30-45 minutes away. There are a lot of entertainment centres and art facilites here as well as a Caesars hotel and casino. Across the water and the border from Windsor is Detroit. Although we did not mention the trip to Detroit in this article a future story will go further into depth on that city.

Here are a few more pics from the trip.

Toronto Bird Photo Booth went to the beach this week! The cameras were set up at various points along the […]