The 2014 Toronto Bird Photo Booth flew to the very north east corner of the GTA last week. Just inside the city limits, south of Steeles Ave near the intersection of Beare Rd and Plug Hat Rd, (which is just north of the Toronto Zoo) there are people putting together a tiny house inside the hayloft of an old barn. 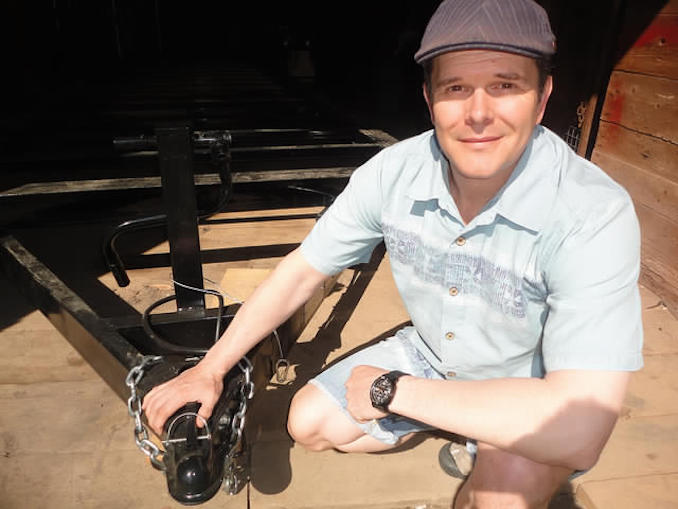 David Shephard, pictured here beside the trailer hitch, is the leader of the small team of technicians handcrafting a Tiny House on a trailer. Their endeavor is to fashion a ‘modular’ mobile shelter that’s 100% environmentally sustainable, built on wheels and filled with solar powered kitchen appliances and many other modern conveniences.

David entered the Toronto Bird Photo Booth Business Challenge 2014 to draw attention to this design build project taking shape here in this environmentally friendly abode. This century old farm is absolutely teaming with nature, and so its really quite surprising that there weren’t more pictures of birds recorded during his week as host…

Underneath his suburban workshop, in the stables of the old barn, there are a great many barn swallows (Hirundo rustica) and these have been much discussed lately as their numbers are declining for many reasons, not the least of which is the fact that there arenít that many old barns with easily accessed stables and herds of cattle feeding swarms of fat juicy flies. All the old timers will tell you the barn swallows used to line the hydro wires – read Bird Photo Booth, Week Four, on the Birds of Toronto website blog.

This mourning dove (Zenaida macroura) is probably the most interesting bird captured and preserved in David’s gallery of images submitted to the competition. Mourning doves are light grey and brown with a distinctive smooth head. Males and females are similar in appearance. The species is generally monogamous. The female lays two eggs at a time, or two squabs (young) per brood. Both parents incubate and care for the young.

As a member of the dove family (Columbidae), the grayish-brown, swift-flying brown dove seen here is noted for its mournful call. Most natural historians agree that’s how this popular bird came by its name. The mourning doves’ soft drawn-out calls do sound like emotional laments. These birds sometimes make these calls from high above, perched on dead branches or on telephone wires, or while walking along the ground foraging for seeds. In either position they issue their sad chant with equal impact. Their curious birdsong coupled with their monogamous nature has fascinated birdwatchers throughout history; many writers imagine the birds to be heartbroken and in perpetual mourning, esp if spotted alone out in the wild.

Guillaume le Clerc, a 13th century bestiaire, called this animal a turtle dove and wrote, “Now I must tell you of another bird which is courteous and beautiful, and which loves much and is much loved. This is the turtle-dove. The male and the female are always together in mountain or in desert, and if perchance the female loses her companion never more will she cease to mourn for him, never more will she sit upon green branch or leaf. Nothing in the world can induce her to take another mate, but she ever remains loyal to her husband. When I consider the faithfulness of this bird, I wonder at the fickleness of man and woman. Many husbands and wives there are who do not love as the turtle-dove; but if the man bury his wife, before he has eaten two meals he desires to have another woman in his arms. The turtle-dove does not so, but remains patient and faithful to her companion, waiting if he or she might return.

These brown doves are among the most abundant birds in North America, having adapted so well to living near humans; so its about time this creature makes an appearance and is represented in the Birds of Toronto photo gallery especially considering that mourning doves eat seeds almost exclusively (which is the only incentive the photo booth can offer to bring birds in front of its motion controlled cameras). Note I said almost exclusively, as the young are fed crop milk by the adults, which is a type of regurgitated stomach material. Crop milk is pulped seeds and grass made by the male and female parents who vomit the stuff directly into the mouths of their young at feeding time.

The mourning dove is a leading North American game bird, with millions farmed or captured all across the continent, a great many are used as live targets for sport shooting. Wikipedia says 20 million birds are consumed annually in the U.S., both for sport and for meat. Fortunately this species is extremely prolific, with as many six breeding cycles per year in some regions. And despite being called a “turtle dove”, its a real fast flier, and can clock speeds of up to 85 mph.

Another visitor to the scene was this baby bunny. The less-than-year old cotton tail rabbit (Sylvilagus audubonii) was imaged in three separate exposures. Unlike the squirrel or the chipmunk, which can eat sitting up on hind legs, and can hold food in their front paws, and in most cases spin edibles in circles to devour them more quickly, the cottontail eats on all fours, and only uses its nose to move and adjust the position of its food.

The cottontail rabbit would turn and ponder each sunflower seed with its nose to find the best place to bite. Naturalists observe that the only time a cottontail rabbit uses its front paws to enable eating is when vegetation is above its head on a living plant. In such circumstances the cottontail will lift its paw to bend the branch or frond and bring the food down within reach of its mouth.

Next week the bird photo booth is headed back downtown to a bird friendly backyard.

Sure selfies are cute but now you can take it to the next level and make it 3D. When it […]

For this Homegrown Business profile we spoke with the folks at frankly, a Canadian premium eyewear company based out of […]