Toronto Bird Photo Booth went to the beach this week! The cameras were set up at various points along the shoreline where it became a feeder for shore birds trading meals for extreme close-ups and emotion filled portraits. You can read up on how Week Seven was hosted by DryShield Basement Waterproofing Crack Master Gary Dorner in what’s becoming a pretty fascinating competition story thus far. Gary definitely added to the mix doing a fantastic job directing the cameras, adopting a totally unique photo strategy for sensational results.

Gary Dorner is an adventurous boater who just got his Captain’s license this summer. As a veteran photographer, and gadget lover he embraced the Toronto Bird Photo Booth immediately, and formed an action plan to get the best shots just as quickly. He emailed me to invite me down to the water’s edge where he decided to set up the rigs some distance from shore on a concrete peninsula orbited by a few different types of remarkably tame waterfowl.

Gary did lots of things differently; he adopted a unique bird feed strategy which was to crumble an entire loaf of brown Wonder-bread, one slice at a time, directly in front of the cameras which are otherwise focused on the city in the background. So while other participants took a week or longer to get birds to come to the lens, Gary’s entire shoot lasted less than ten minutes. Two Canada Geese came over as soon as they say the bread bag, and the rest of the ducks followed the source of the squealing seagulls who ate as much as they could before those two big bully geese arrived. Scrambling about getting the odd piece of bread thrown directly in front of them were the American black ducks that Gary likes so much.

Gary’s shoot produced some remarkable pictures; his gallery will prove to be a strong contender in the 2014 Toronto Bird Photo Booth Business Challenge. It really is remarkable how he had the vision to take the cameras off the tripods and set them falt on the ground. with an eye on getting closer to the birds by getting right down on the muddy pavement to look into their eyes for a sense of their emotions. He knew he was going to feed brown wonder bread and he knew the birds would be going to ground to get it , so it made sense to him to put the cameras right on the muddy concrete and shoot this action. It worked. And although he tried to favour the ducks, the seagulls and especially the juvenile gulls got most of the bread. 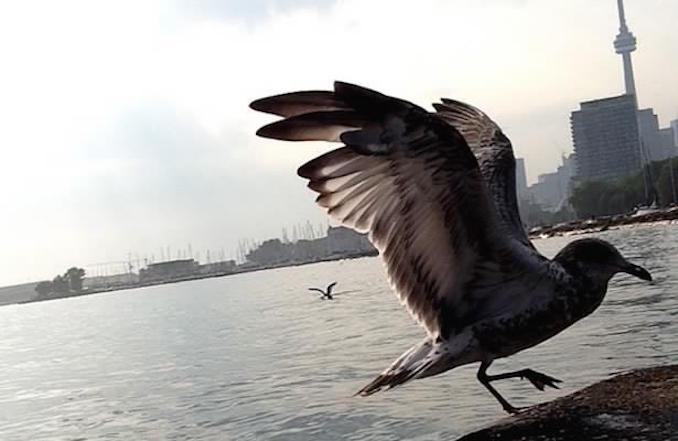 The long and cumbersome wings of these gulls may not help them get into the air very quickly, or easily, but they’re also perfectly designed for soaring long distances with little effort, and for swooping in and snatching bread balls away from slower ducks. The ducks have shorter rounded elliptical wings that can get them off the ground in a heartbeat, but the energy that it takes to lift that heavy body is harder to sustain. Gulls are members of the Laridae family, which are all long winged seabirds, with stout bills, webbed feet and generally rounded tails; most species are coloured white below with pale grey to black back and wings, some with a dark hood when breeding.

Seagulls are very cosmopolitan birds and are found in every city in the world. Mainly coastal dwellers, there are also inland varieties that live near water. There are 7 genera, 51 species, 78 taxa with 6 species considered threatened, but no species of gull has gone extinct since the late 1600s, when such recording began. This is a creature that can live and even thrive in the most densely populated areas of our society. Nearly one-quarter of the present population of Canada lives in southern Ontario near Lake Ontario

The city’s waterfront is filled with all manner of avian and marine wildlife that is threatened by urban development, including expansion of the Port Lands, and the potential expansion of the Toronto Island Airport . Green spaces from the Rouge Park to the Leslie Street Spit and Colonel Sam Smith Park are home to precious avian wildlife, including 100,000 cormorants alone. By shutting down the worst industrial polluters in the 1970s and 80s, the City of Toronto has vastly improved air quality over the past decades. Gradually progress is being made to rein in toxic exhausts and large scale carbon emissions. One of the highlights of the Toronto lakeshore today the many species of wild ducks, particularly the American Black Ducks that are quite sensitive to low level toxins.

American Black Duck (Anus rubrites) is a dabbling duck, which means it is a surface feeder and only makes shallow dives. The species does well living beside man in shallow wetlands across eastern North America.

Females select a nest site that is located in wooded, bushy or grassy areas under overhanging vegetation that protects and conceals the nest. It is common to see the female leading her young in the spring and early summer. Females lay an average of nine greenish buff or creamy white eggs, which they incubate for about 26 days. The female stays with her ducklings for seven to eight weeks until they are able to fly, then retires to a secluded area to moult. Males typically abandon females during mid-incubation and move to larger lakes and wetlands to moult their feathers.

The American Black Ducks don’t attract a lot of attention; they flock with the ubiquitous Mallards, where they look quite similar to the female Mallards. But take a second look next time you spot a group brown ducks, and you may notice the dark chocolate-brown flanks, pale grayish face, and olive-yellow bill of an American Black Duck living in their midst.

Toronto photographer Jamie Hedworth sent us this great shot of a Blue Jay bird in Toronto. With the Blue Jays […]

This week, Toronto Bird Photo Booth flew across town to land on the pea gravel roof of a two story […]