We’re getting ready for the arrival of Santa across the city through various events and appearances. Of course the grand entry happens on Sunday, November 18th with the largest Santa Claus Parade (maybe in the universe) right here in our city. But it’s not the only parade he’ll make an appearance at! As he prepares for the busiest night of the year, he’s making sure he says HI to as many kids, and kids at heart. If the big city parade is too big for you, there are many other ones happening nearby!

His elves have been super busy with letting us know where to find him, you know, so we can remind him that we’ve been very good girls and boys. Bundle up! Here’s a list of where you can spot Santa! 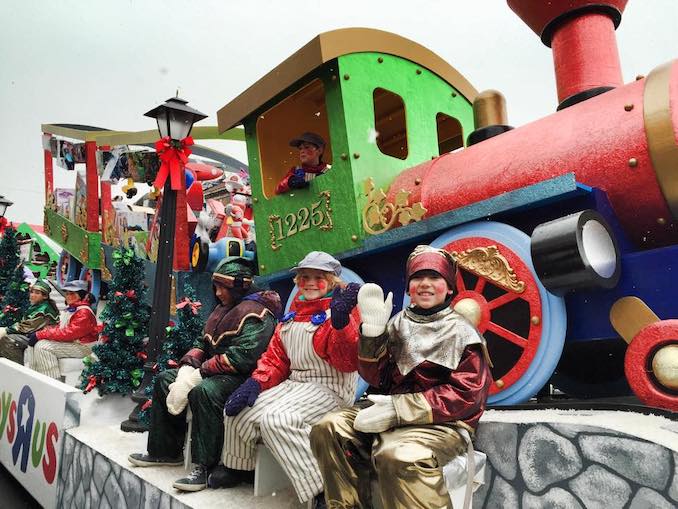 Toronto’s Official Santa Claus Parade: November 18th from 12:30 pm. The 114th annual parade route starts at Christie Pits and meanders it’s way through the city eventually ending at St. Lawrence Market. Take note of change in parade route this year. The parade itself will take 2.5 hours no matter where you’re situated along the route. Dress warm and note nearby public washrooms for the little ones. Pack a snack because you won’t want to miss a thing! You can also catch the parade in your pajamas and hot cocoa at home in front of the television on CTV at 4:30 pm ET/PT.

Georgetown Santa Claus Parade: Saturday, November 17 from 5:00 pm. The parade is an evening parade featuring over 80 bands, floats and marchers decked out with thousands of lights. The parade starts at Sinclair Ave.travels west on Guelph Street ending at the Georgetown Fairgrounds Park.

Milton Santa Claus Parade: Sunday, November 18th from 1:30 pm. Starts at Main Street West and Scott Boulevard heading east and and will end at the Milton Go Station. Local historian Jim Dills tracked Santa’s arrival in Milton throughout the years. According to Dills, Mr. Claus made his first appearance in 1907 at the shop of a local merchant. There was no parade that year, that came later. But the tradition had begun. Christmas celebrations were kept low-key in years like those during the First World War and in 1924 when there was an outbreak of measles, Dills said. But in 1925, the community and merchants organized a program that saw Santa ride along Main Street on the radiator of a motorcar.

North Etobicoke Santa Claus Parade: Sunday, December 2 from 1:00 pm. The 2nd annual parade will be starting at the corner of Albion Road and Thistle Down Boulevard. It will then proceed northwest along Albion Road, ending at the Albion Centre.

Bolton Santa Claus Parade: Saturday, December 1 from 11:00 am. This year’s theme is “What Christmas Means To Me.” Parade route travels along Highway 50 and makes its way down the centre of Bolton.

Beaverton Santa Claus Parade: Friday, November 16 from 6:00 pm. The parade will proceed down Main Street to Simcoe Street, Osborne Street, Bay Street and continue back to the Fair Grounds.

Uxbridge Santa Claus Parade: Saturday, November 17 from 11:00 am. The theme for this 58th annual parade is “Christmas for Kids”. Parade starts at the corner of Brock St. & Centre Rd. and then heads east on Brock St. through town to Nellkydd Lane & finishes at Uxbridge Secondary School.

Newcastle Santa Claus Parade: Sunday, November 18 from 5:30 pm. The parade will proceed easterly from North Street along King Avenue to Arthur / Brookhouse street in the east. Starts with a fantastic fireworks display at 5:30 pm followed by 70 entries that range from marching bands, to clowns and beautifully light up floats that children of all ages enjoy.  This year the theme for the Parade is ‘Starry Night’.

Ajax Santa Claus Parade: Saturday, November 24 from 6:00 pm. Parade route begins at the intersection of Bayly Street and Mackenzie Avenue, proceeding east along Bayly and then north on Harwood Avenue South, concluding at Ajax Town Hall. Immediately following the parade will be a special tree lighting ceremony and after party at Town Hall (65 Harwood Avenue South) and Ajax Main Library.

Weston Santa Claus Parade: Sunday, November 25 from 2:00 pm. The Parade begins at Weston and Church Street and proceeds south on Weston Road ending at Sidney Belsey Crescent. This is the 40th anniversary of the parade and with an attendance of over 10,000 people each year.

Newmarket Santa Claus Parade: Saturday, November 17 from 11:00 am. The parade will start at the corner of Lorne Avenue and Eagle Street; proceed east on Eagle Street and then North on Main Street, ending at Ontario Street.

Aurora Santa Under The Stars Parade: Saturday, November 24 at 6:00 pm. The parade will travel south on Yonge Street from Orchard Heights Boulevard to Murray Drive. The Salvation Army will be picking up food donations and letters for Santa along the route before the parade begins.

Richmond Hill Santa Claus Parade: Saturday, November 17 from 6:00 pm. Beginning at William F. Bell Parkway travelling south on Leslie Street ending at Performance Drive. This popular night time parade attracts thousands and features a number of diverse floats, walking groups and marching bands from in and around the community. This year’s theme is Rockin’ Around the Christmas Tree!

The Second City’s contribution to holiday joy is the new comedy revue, The Good, The Bad and The Ugly Sweater. This […]

In Iceland, they celebrate Christmas jolabokaflod style, which translates to book flood, where people gift books and then read them […]

Our Favourite Family Holiday Shows in Toronto for 2017