Artist Rachel Kahn is a force to be reckoned with in the Toronto arts community. The artist and illustrator has recently turned her attention to the gaming community, looking to the intensely productive creative opportunities for collaboration that exist between artists and makers of indie games in Toronto.

How would you describe your own creative style?

I’ve been so focused on learning and getting better at my art instead of taking stock of my work this year; that this question totally throws me! I guess I’ve been thinking less about making all my art appear to have a unified style, and focusing more on working with a unified approach or method. For me, it’s really important when doing any final artwork that I stay focused on research, iteration and exploration towards making the best possible piece for the purpose. I think careful design can bring a lot of story into a simple illustration. Ah, there we are! I think my style is focused on storytelling, or at least the best things I’ve done so far are. 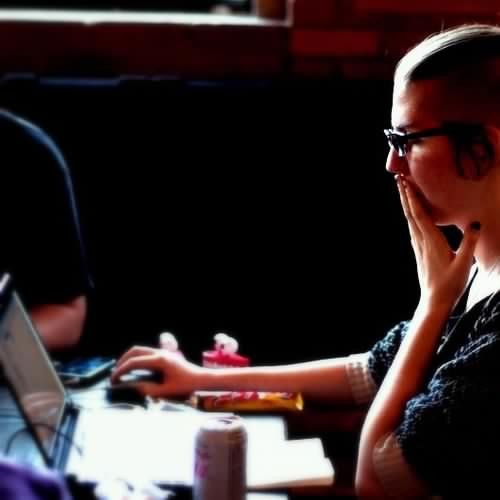 Rachel at Gamercamp 2011, chugging caffeine & sugar and staring into the creative void.

What is your favourite medium to use and why? How do you combine different forms of media in your work?

I don’t like to leave the house without a sketchbook. I love sketching at the ROM, in bars and cafes; I generally bring a mechanical pencil, a kneaded eraser, an extrafine gel pen, an opaque black brush pen and sometimes a transparent gray brushpen. Sketchbook drawings often get scanned into the computer and painted digitally in Photoshop.

For deadline-oriented work, I normally go 100% digital. I use a 12” x 12” Wacom Intuos 2 tablet with Photoshop CS3 and will go from thumbnail to under-drawing to final painting, all on the computer.

If I had infinite time, though, I’d spend more time in my studio with my oil paints. Working in oils is one of the most seductive processes I’ve ever tried.

What is your preferred genre to work in?

I love pulp fiction genres. Action, adventure, fantasy, sci-fi, Hyborea… I want to make pictures that take the viewer to an otherwise inaccessible place, to see some things they wouldn’t normally get to see or feel or do in their lives. I think that’s a great gift to give anyone and I definitely owe the universe for all the pulp fiction inspiration I’ve taken in! But I have to admit, any genre that lets me do some worldbuilding, whether it’s historical, contemporary, fantasy, futuristic, well that will keep me pretty excited. If you can combine a few eras into one, then you’ll definitely have me sold!

The most moving images, to me, are often Symbolist or Pre-Raphaelite scenes depicting specific parts of a story. There was an exquisite Jean Paul Laurens painting at the AGO a few years ago, “The Excommunication of Robert the Pious,” and it is not only painted well enough, but it is itself physically large enough to almost transport you to the sorry tableau it depicts. Those paintings move me, and any contemporary work that strives for the same sort of storytelling certainly moves me.

Also, Frank Frazetta’s work moves me, but maybe not in the way you meant? He brings a … carnal nerd lust? A special something to my eyes.

As for what disturbs me? Giger. And all his more recent disciples of body horror. Disturbs, and often fascinates… 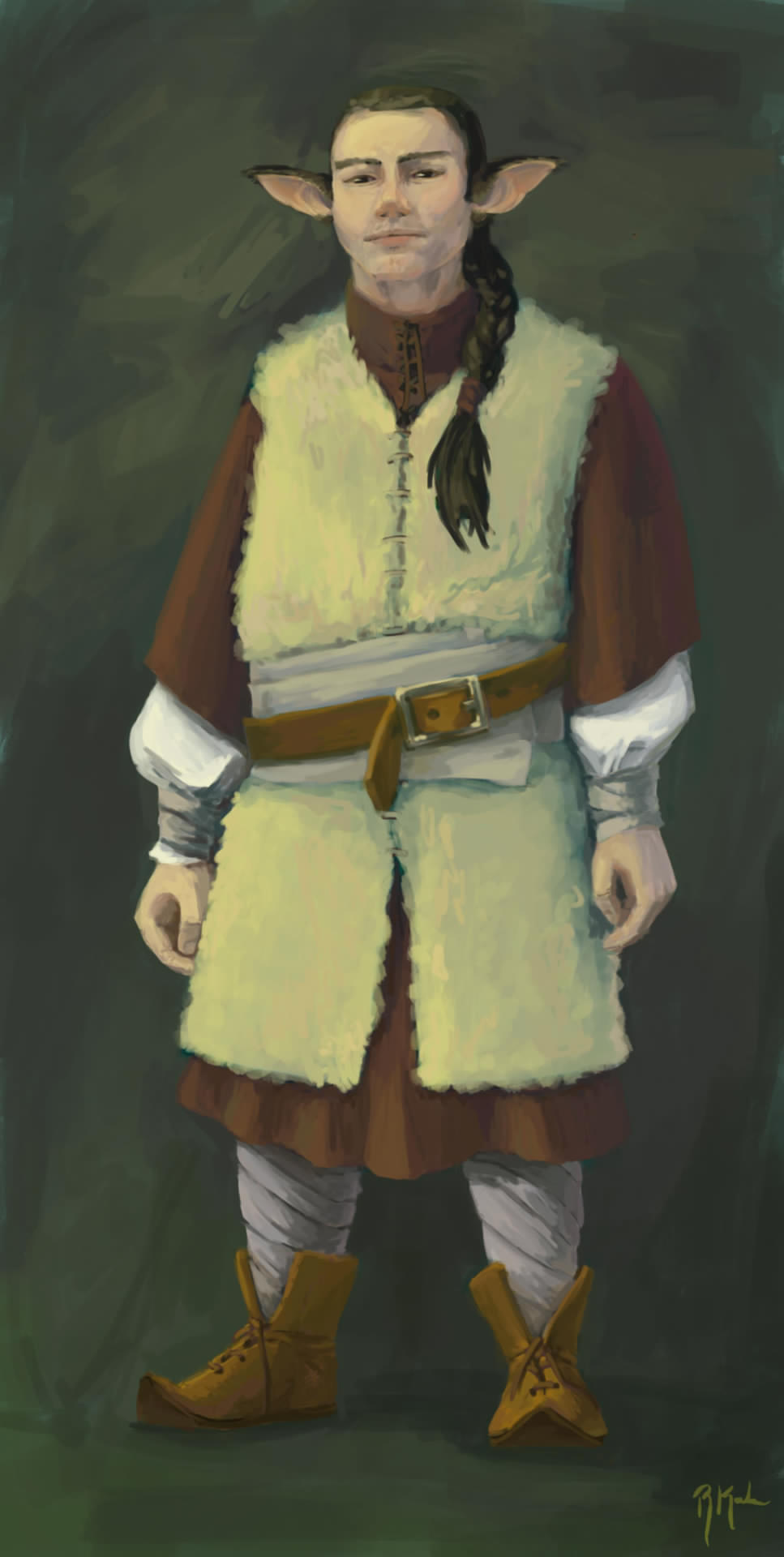 A comic character design Rachel is currently working on for http://orinsword.tumblr.com/

You have worked on several different forms of collaborative projects — in particular, you have an interest in both comics and indie video games. What is it about these forms that appeals to you?

I love telling stories, but for me that’s only as much about the story itself as it is about making the world for the story to happen in. Comics are a fantastic venue for linear and multilinear narrative, using pictures to guide people through one or more stories, so I love to read them and draw them. Videogames are where you can find nonlinear narratives — stories that are planted across environments, landscapes that are the stories themselves — and that really excites me!

Indie comics and videogames are both huge communities in Toronto, as well, so I’m very lucky to be here, now, and surrounded by people who are actively encouraging new, surprising, nontraditional work. Both comics and games are incredibly demanding media, though, and take much, much longer to make finished work in than generally understood. So it’s a good thing I’m as excited as I am about them!

How does collaboration help your creative process?

This feels like such an inherent fact to me that I am having trouble articulating it. I think, for me, working solely for myself feels sort of pointless. At the very minimum I am motivated by that post-publication collaboration with viewers, readers, players.

One step up from that is the collaboration that happens when I run process work or ideas past other people. Their encouragement means a lot and an outside viewpoint is invaluable when I’m too deep in my process or to close to my deadline to think clearly about the larger picture.

But the real thrill comes when someone else is also invested in an idea. With two or more minds brainstorming towards a shared goal I feel like I often end up at something I would never have created on my own, and I generally impress myself.

What makes the video game community in Toronto so special? Tell us about some of your experiences with the community, an in particular with the collaborative event TOJam.

Holy crap, giant question. Toronto indies, why are you so special? Well, first, the people. They are all incredibly nice and so excited about what they do and so ready to share and teach and collaborate and inspire each other. Then, they are constantly doing things. And sharing them. And holding events. And launching games. And running free workshops. And jams. And work days. And mentoring each other. And always seeking out new people to bring in to the community, to strengthen and grow it beyond its existing base.

And then there’s TOJam. I don’t really know where to start, except to tell you that it is basically like summer camp, but over a three day weekend, and the participants are almost all old enough to drink but also comfortable enough to wear their slippers, especially after the first overnight. Everyone is pouring their heart, soul, and most of their sanity into computers in the hopes of nurturing or coercing a small, strange, unique, homegrown, fast-prototyped videogame out of them.

If you want to learn more about this community be sure to check out: The Hand Eye Society, The Toronto Chapter of the International Game Developers Association, Dames Making Games, Gamercamp, TOJam, The Game Prototype Challenge, The Toronto SkillSwap… I hope I’m not forgetting anyone!

The Toronto Indie Game community has been a real launchpad for my career. I’ve been meeting incredible people, participating in community events that are often fun and useful at the same time, and it’s been the best way to meet people I’d like to work with, and to help them get to know me and, in some cases, to choose to collaborate with me, either as a contract artist or as a partner in game design.

As an example: after sitting in front of them at TOJam, I attended a free workshop given by the two founders of a small Toronto game studio. After that free workshop, we went out for wings. During the wings, they shared some exciting ideas that they were working on, and I got really excited for them. A few weeks later, they emailed me to ask if I was still excited, and if I wanted to collaborate on some art! Since then they’ve been encouraging, professional, discerning clients, and also great people to hang out with! And that’s not the only experience of that kind that I’ve had.

Everything I’ve gotten to work on this year has been exciting, nerdy, and immensely fun, and I have this community to thank for that.

What kinds of writers/ other artists do you find it most fun and productive to collaborate with? What do you look for in someone you want to work with?

I want to work with people who have a clear idea of what they want to do in a given project, and a strong passion for it. I want to work with people who do work I respect, work I like and work that I can relate to. But I think the most important thing in a collaboration is always communication. No matter how closely aligned our goals may be, if we can’t tell each other about them we’ll never be properly in tune. So, someone who knows what they’re doing, whose work I respect, who I feel comfortable talking about art, design and visual decision making with. This sounds really picky, but I’ve had great luck so far finding more than a few people of this calibre.

Do you have an projects in mind or in development that you would like to collaborate on with another artist or writer?

Who doesn’t? As a concept artist and illustrator, my main missing art skill is animation. I would love to work on a short film, a music video, that sort of thing, with an animator who is as excited as I am to do it. One pet project in my mind has been making short movies out of really hilarious Monster Magnet songs by focusing on the sci-fi elements of their lyrics. Also, working in videogames has lead to me brainstorming a surprising variety of game ideas that, as of yet, I’m not sure anyone else would find fun, but I would sure love doing the art. And not just video games; the more tabletop gaming I participate in, the more I find myself returning to that gut-level desire to build worlds, whole worlds and nothing but worlds. Setting design, I think it’s called. But a setting’s not a game without some mechanics, so….

I have to say, though, I’m lucky right now in that almost all of my daily projects are exciting collaborations with great people, and that, as a concept designer and illustrator, that’s exactly what my job description is!

The internet! Visit my website, Portable City, for my professional portfolio and blog, and my tumblr to see inspiration posts, sketches and studies.

Jackson Rowe is a comedian and improviser from Toronto, Ontario who was born and raised in the bustling Beaches neighbourhood […]

Vicki Lovelee is a Chinese Canadian alt-pop singer from Ontario, Canada. She uses orchestral instrumentation and fuses them with dramatic, […]

Sandrine Dickel grew up within a united, loving and supportive French family. She has been immersed in a very open […]