In case you were unaware and thought the only way to delight in CBC radio programming was through, well, radio, I have news: CBC Podcasts exist! In fact, The Village, an LGBTQ+ True Crime CBC Podcast, has just gone into its third season. Where the first two seasons of The Village delved into modern-day crimes related to the LGBTQ+ community as hosted by Justin Ling, this third season takes a 30-year step backwards in time, and place. 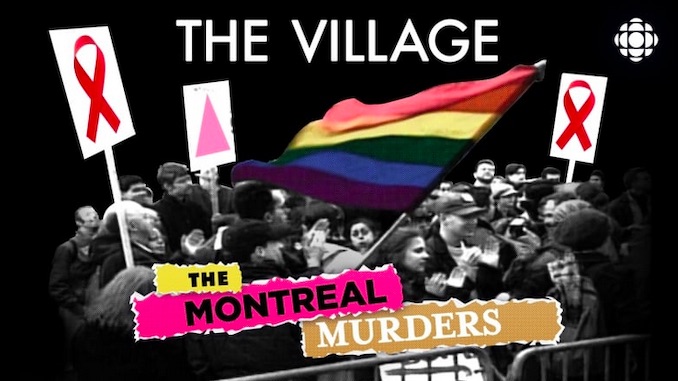 Francis Plourde is the new host of The Village: The Montreal Murders which takes a look at not only the crimes within the Queer community at the time but also the historical context: the AIDS crisis, Gay Rights activism, the Catholic Church, and more.

The first two episodes (out now) set the stage with the case of Joe Rose, whose death motivated a movement, and the horrible police brutality in the 90s. “We had to revisit this event [Sex Garage] that was so shocking, so traumatic for the community [because] we use that to explain how the relationship with the police was so tense and how there was mistrust in the police… We’re going to be building on that for the next few episodes and [focusing] on the murders because that’s the core of this series. It’s about those 17 murders that happened between 1989 and 1993… The next episode is going to be about how they figured out that gay men were dying because it was not obvious that the men killed were gay.”

The Village: The Montreal Murders is a seven-part series that took Francis Plourde and his team eight months to make. The episodes clip together interviews from witnesses, activists, and prominent members of the LGBTQ+ community in and around the Montreal scene at that time, with Plourde’s narration providing context and audio to immerse you in the moments they describe. It’s an all-encompassing experience, a podcast your mind can’t wander away from.

Plourde noted the struggle in making this series wasn’t that people were unwilling to talk about that time but, “When it came time to revisit the 90s, that period for some people and those were the front of those battles, it became quite hard to revisit. There was like a willingness to share their experience, but in some cases, they had blank spots because it was so intense that they completely forgot about it.”

Also, when trying to fill in the gaps in his research and visiting a Montreal archive to retrieve court files for these murders, Plourde found all but one of the case files had been destroyed. Even Joe Rose’s court case, which ultimately became a significant cultural moment for the Montreal Queer community, was deleted. “It was a recurring problem not just for the case of Joe Rose, but for many of those cases… Most court files will be deleted after 30 years. They’ll keep a trace that there was a trial, and they’ll keep the judgment. But for the kind of work I’m doing, those boxes with evidence and transcripts are precious… We have to rely on newspapers, witnesses and all that. It’s complicated work, the work that we did.”

The Village: The Montreal Murders is produced by Justin Ling, Carrie Haber (Ideas, The Current), and Michelle Gagnon (Ideas). Season one is nine episodes, and season two is five episodes; both entirely worth the retrospective listen. New episodes of season three are available to stream every Tuesday on CBC Podcasts or wherever you get your podcasts. Also, be sure to check out Francis Plourde’s recommended palette cleanser for after the heaviness of The Montreal Murders: Welcome to Provincetown with new episodes available Wednesdays on Stitcher or wherever you get your podcasts. You can also check out the french version of the podcast, Le Village : meurtres, combats, fierté.

Charitable Choices: Venus Fest, a new kind of space within the music scene

Give Montréal Some Winter Lovin’

Thinking of taking a little time away this holiday season, perhaps with your intimate partner, for some fun, romance, or […]