We had the chance to catch up with the comic Nick Nemeroff about his influences, his projects and his JUNO-nominated comedy album “The Pursuit of Comedy Has Ruined My Life”. 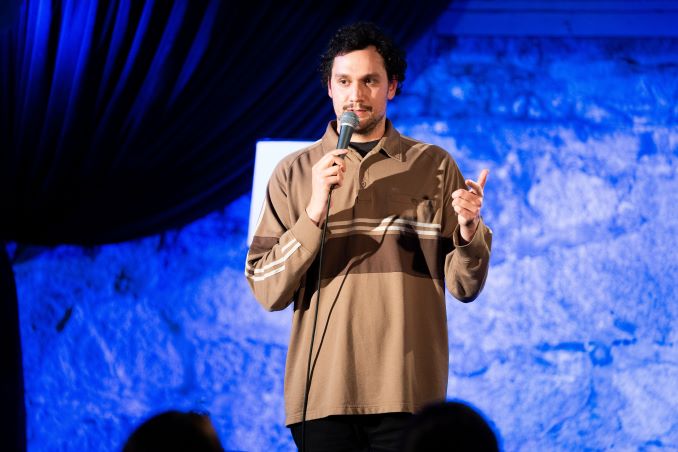 I would describe my comedic style as “funny”…to be more specific I would say I saw someone describe it as aggressively deadpan once and I thought that suited it pretty well…my mom has also called it “cerebral” which I think is good.

As a kid I really loved Mitch Hedberg and Demetri Martin and then growing up I got really into comics/shows like Norm Macdonald, Nathan Fielder, Laugh Sabbath, & 30 Rock. And my family too, they are all really funny.

Mitch Hedberg for sure.

Get a drink, say parts of my set quietly to me, and try to watch some of the other comics on the show to get a read on the vibe of the room. Definitely, a cool look to sort of murmur to yourself while standing in the corner of a comedy show sipping a beer.

My favourite place I’ve ever performed was The Ossington (RIP). It was the back room of a great bar in Toronto, with extremely low ceilings, tight quarters, and a very classic brick wall background. It was familiar and exciting all at once. A lot of comics, including myself, recorded their albums there for those very reasons and it is dearly missed.

My favourite bit I’ve written is a long one where I pretend to read off my hand for like 3 minutes but it’s all really hacky crowd-work stuff and at the end, I reveal I don’t have anything except “psych” written on there. I’m not sure how funny that sounds in print but at the time it helped me express a lot of what I thought was worth making fun of about stand-up comedy, and how little creativity there was in it. I was proud of it because it was different than all my other bits and it met that sweet spot of people who were really into comedy got it, and then people who just like to watch stand up every now and then also got it but maybe for a different reason. I also got to do it Conan which will always be a major life highlight for me.

Watching live stand-up. There are a lot of great new ways to find comedians but nothing compares to getting to see someone do it live and in the moment. There are truly so many hilarious and original stand-ups out there right now so it’s a great time to go see live shows and discover.

I live in Toronto now but I grew up in Montreal…right around here actually. I grew up on the corner of Rue Barré and Detour. We moved around a lot.

You can check out my debut comedy album (nominated last year for a JUNO for Best Comedy Album) called “The Pursuit of Comedy Has Ruined My Life” on Bandcamp and anywhere else music is found, watch my new taping on season 2 of The New Wave of Standup out now on CBC Gem, and see me on Season 2 of CTV Comedy’s Roast Battles Canada coming this summer.

Harrison Weinreb. He’s the funniest guy ever. Watch him live or follow him online and you’ll see.

In 2015, JUNO award-winning Sean Jones became the first artist to secure a solo summer residency at the historic Casa […]