Salma Hindy is a Toronto comedian whose episode of True Dating Stories is one of eight new dating horror stories told by real people, re-enacted by performers with all of the drama, romance, and comedy they deserve. Season 3 of the show premiered on January 28th and is now streaming on CBC Gem in Canada. We spoke with Salma to find out more about her. 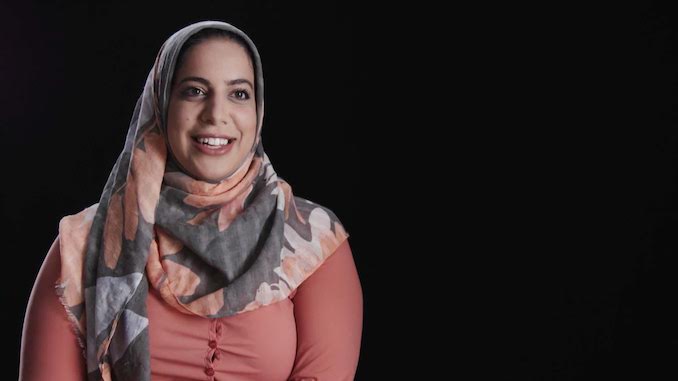 My style is very much storytelling (i.e. telling a story that would’ve normally taken 5 mins in 45). I love to talk about my family (in particular, my dad) and weird things that’ve happened to me in my life. Most of my comedy is spent turning men into material!

Ugh, I mean just every female comic ever who doesn’t care about anyone and is completely herself. Ali Wong was the first Netflix special I ever watched. Trevor Noah is sooooo disgustingly charming. And Hasan Minhaj because of his animated storytelling style, which is VERY much what I relate to.

A BIT CONTROVERSIAL but I lovedddd Louis C.K. I just felt like he was an expert at crafting the wording and cadence of jokes. I also love-love-lovedddd Mindy Kaling. She changed everything for me. Seeing her on TV not being white gave me the permission I needed to envision being in this industry.

I used to not be able to eat for the entire day because of nerves but now I literally show up 5 mins before to prepare. My ritual includes: pulling up Evernote and quickly scratching down each of the bits I’m gonna say that night. If I have a new bit I wanna try out then I think about the punchlines I wanna hit and just let that guide me on stage. I ALSO ALWAYS take a peek at the audience and see how the host or comedian before me’s doing so that I can calibrate my expectations. I also like to say a prayer sometimes which translates roughly to “Open for me my chest (grant me self-confidence, contentment, and boldness); Ease my task for me; And remove the knot in my tongue, so that my speech may be understood”

What is your favourite place that you’ve performed at? Why?

It’s gonna have to be at the Gotham Comedy Club in New York for the New York Arab American Comedy Festival. That was when I met so many Arab comedians and made big connections that have lasted me ’til today.

I also loved performing at the Nubian Show at Yuk Yuk’s in Toronto. Just one of the funnest rooms in the city.

What is your favourite medium for listening to or finding new comics/comedians?

Netflix for sure but recently Instagram and TikTok! A lot of new comics are posting their short clips there and it’s such a great way of discovering up-and-coming talent.

ACTUALLY YES!! I’m soooo so soo excited to announce that my first-ever comedy ALBUM is coming out next month! It’s called “Born on 9/11” and it’s the live recording compilation of all of my standup material from the last 5 years. I’m so excited to put it out there and have everyone hear it!!!

I once went on a blind date… WITH MY FATHER. Who is an Imam. (To learn more, please watch my True Dating Stories episode, haha)

The incredible comics you’ve seen in my True Dating Stories episode! Sammy Farid, Rob Michaels. And a personal obsession of mine: Hoodo Hersi.

“A Day in the Life” with Toronto creative Julian De Zotti

De Zotti. De Zotts. Jou-lee-on. P.A. These are the only names that I have ever used and will continue to ever […]