There’s a wall, in your family home. It’s next to an old stairway that leads to an attic you never go into, but the wall is alive and lined with photos. On Everything at the Same Time, the first solo outing from Caroline Marie Brooks (⅓ of Good Lovelies), those photos are taken down and carefully dusted off, ready to have their stories told by someone intimately connected to their finer details. Over 11 tracks, Caroline Marie Brooks leads a vivid journey through feelings familiar to our hearts. Gentle guitar work laying a backdrop for Brooks’ sweetly divine vocals, layered with wurlitzers, mandolins and steel guitars to evoke feelings of memories both lost and found.

Recorded and co-produced with Jim Bryson at Fixed Hinge studio and featuring an impressive lineup of skilled musicians, Everything at the Same Time was released September 24th, 2021 on CD, Vinyl and all digital platforms. 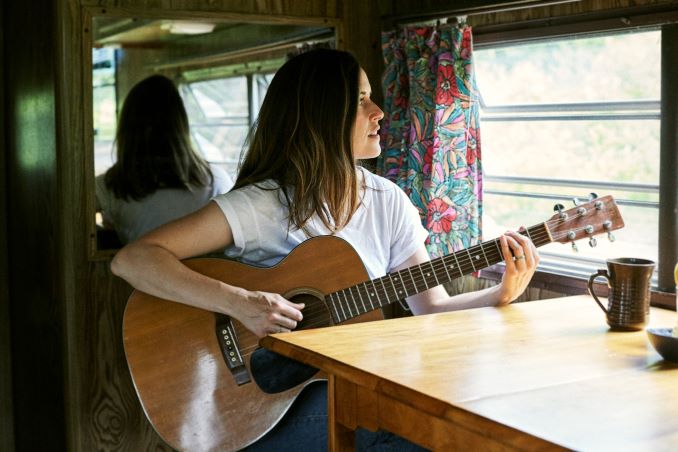 This is my first solo release, though I have released many (MANY) albums with my band Good Lovelies

My first solo album, Everything at the Same Time

I had some pretty eclectic tastes as a teenager. I was really into Canadian folkies like Bruce Cockburn and Joni Mitchell, was obsessed with The Beatles, and absolutely wore out my Alanis Morissette CDs.

This is a very difficult question to answer, but if I had to choose one artist who has influenced my writing and who I regularly listen to, that would have to be Sarah Harmer. I love her melodies, and her turns of phrase. There’s no one like her.

Belly bumps. This was especially entertaining when I was super pregnant on the road.

So I’m guessing you mean musician, but I’m going to tell you about one of my favourite visual artists, Julie Fader, who is also a very beautiful singer/songwriter. I have one of her incredible paintings in my kitchen and it gives me so much joy.

LP…and listening to full albums in their intended order.

I love early mornings when I can manage. Over the last winter I got up super early to have some time to myself before my kids woke up, and that helped me stay sane during the mad days of virtual school.

My first solo album, “Everything at the Same Time” came out September 24th, 2021

Pukka, St Clair West. Some of the most delicious Indian food I’ve ever had.

Wychwood Park (not a park, an actual road!). This is truly a magical street, like a secret garden of Toronto, an enclave in the heart of the city. It’s especially romantic at night when the old-school warm street lamps are glowing. In the winters I love to skate on the pond there, and in the summers my kids and I go regularly to check in on the ducks.

Cedarvale Park. It’s got everything – a beautiful ravine, a dog park, a wicked hill for tobogganing, sports fields, a park for kids, and Hunter Coffee nearby.

This is a tough one, as it sort of depends on the band I’m seeing. I love the intimacy of The Dakota Tavern, the atmosphere of Paradise Theatre, and I am SO excited to see the new Massey Hall.

Born in Mississauga, Ontario, Ten Kills The Pack, is a project that was shaped and raised in the city of […]

The O’Pears are a Toronto-based contemporary folk trio made up of Lydia Persaud, Jill Harris and Meg Contini, three songwriters […]