Our review of Dariusburst: Another Chronicle EX+, developed by Taito and Pyramid. Available now for Nintendo Switch. 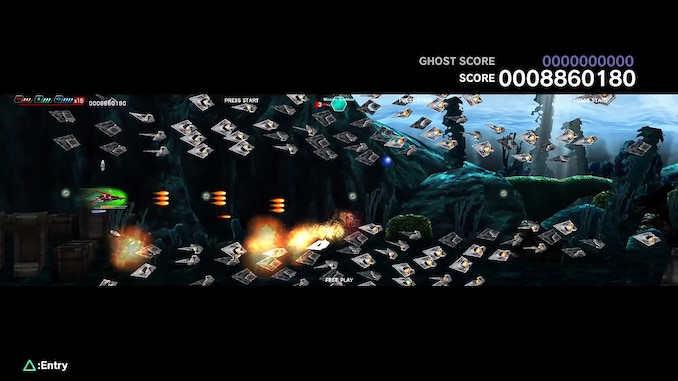 An aquatic-themed shmup, ported from an eleven-year-old arcade release.

It’s a decent enough shmup, though its sloppy port leaves something to be desired. 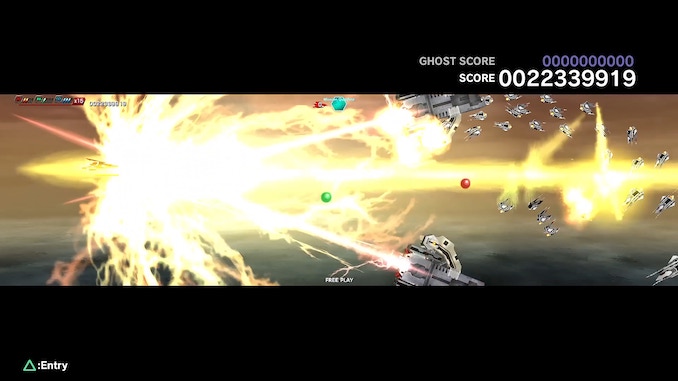 2020 was supposed to be the year that I finally fulfilled my dream of visiting Japan. With that plan now on indefinite hold, I’ve been surviving on a steady diet of Japan-centric TV (the original Shogun), film (Kurosawa), and oh-too-many video games.

As a diehard gamer, I’ve always been fascinated about a couple of elements of Japanese culture: their love of shmups (“shoot-em-ups”), and the enduring popularity of arcades in Japan. It’s been a looooong time since there was a proper Western-produced shmup, and longer still since I’ve set foot in a proper arcade (excepting, of course, the amazing/terrifying Movieland Arcade in downtown Vancouver).

Dariusburst: Another Chronicle EX+, a shmup diehard’s dream game, encapsulates both these passions: it’s a hardcore old-school shmup, and it’s a direct port of a 2010 Japan-only arcade release. And when I mean direct, I do mean direct: this Switch port even includes the original on-screen warning to “watch your head!” as you step out of the arcade booth. 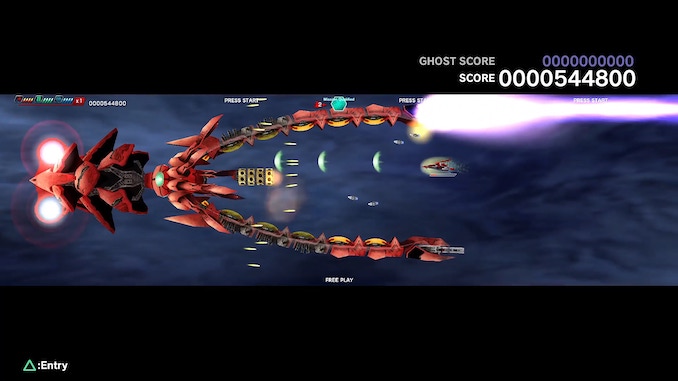 Dariusburst: Another Chronicle EX+ is the latest in a remarkably long-running series, dating all the way back to the original Darius, released in 1987. Darius has never been as well-known as, say, R-Type or Gradius, but its dedicated following has kept the series afloat for decades. Darius is largely known for two things: its “space aquatic” theme, featuring robotic/spaceship enemies that resemble sharks, turtles, and other marine creatures, and its massive, multi-screen arcade hardware.

Another Chronicle‘s arcade-perfect fidelity has its pros and cons. On the one hand, it’s the exact game I might’ve been playing had I flown to Tokyo last August, as planned. Better yet, Another Chronicle is set to permanent “Free Play” mode, giving me unlimited free lives. It’s a programmer’s shortcut, circumventing the arcade game’s hunger for 100-yen coins, but it also means that, no matter how poorly I play, I’m guaranteed to see each of the game’s multiple endings.

On the other hand, absolutely zero thought has been given to translating this arcade release for home play. Most damningly, the port doesn’t account for the fact that the original Another Chronicle was a behemoth of a multi-screen game, its playing field twice as wide as a typical arcade title. Rather than rework this for home play, the Switch port squishes the whole thing into one, long, narrow field-of-view, with thick black bars along the top and bottom. You’ll need a big TV in order to get any enjoyment out of it – and forget about the Switch’s portable mode; it’s just too tiny to work on that smaller screen at all. 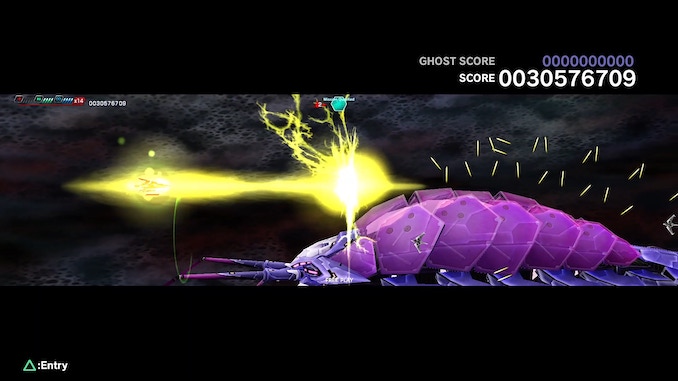 The very first boss in Another Chronicle is a giant robot space shark. It’s no secret that I love sharks (and shmups, for that matter), so Another Chronicle should be an easy sell for me. And sure enough, I did stick it out long enough to see its multiple endings, including boss fights against space sharks, turtles, whales, and so much more. I also managed to induce one friend into joining me for Another Chronicle‘s same-screen co-op mode, and I’m a sucker for those too.

That said, Another Chronicle simply can’t hold an angler fish torch to the stalwarts of the genre. Its aquatic theme is enjoyable enough, but the game’s real selling point, its massive arcade multi-screens, is the source of its greatest weakness on Switch. Add in some troubling design choices, like the fact that it’s not always clear when you’re dealing damage, and your annoyingly underpowered ships (it takes forever to defeat bosses), and it inevitably feels like a lesser shooter. A good one, yes, but not a great one. I guess robot alien space sharks only get you so far.

Visit the official page for Dariusburst: Another Chronicle EX+ here.