Yet another open-world survival game, except this time it’s colder!

Like The Long Dark before it, it has a certain, frigid charm. But boy does this game not know how to shut up.

The world is too big, and there are too many survival games.

That’s the conclusion I’ve reached after a decade-plus of This War of Mine, Don’t Starve, Stranded Deep, and a dozen or more open-world survival games. All games that simulate, effectively, the experience of being lost and stranded in a harsh environment, barely struggling to survive. All games that force you to focus on the minutiae – the ever-dwindling stamina metre, your character’s empty stomach and parched throat, the joys of discovering an abandoned cabin.

The pinnacle of the genre remains, in my opinion, The Long Dark, a Canadian-set/Canadian-developed survival adventure set in a hostile, frozen climate. As I wrote in my review, the genre works best when it’s finely balanced:

That rhythm is one of death and reincarnation. The goal in The Long Dark, at least in its sandbox Survival mode, isn’t to complete the game so much as to survive as long as possible. Thrown headfirst and ill-equipped into a bitter Canadian winter, you must hurry to find shelter, food, water, and heat, all while contending with the ever-looming threat of darkness (the game runs on an accelerated day/night cycle), hungry wolves, and the harshest of elements. You don’t necessarily win The Long Dark, you just learn to get better at it.

Like The Long Dark, the Subnautica series has been around for a while, starting off as an “early access” success and eventually evolving into two distinct releases: the original Subnautica (2018) and now Below Zero (2021). Like The Long Dark, Subnautica is beautiful and filled with wonderful sights – if you survive long enough to find them. 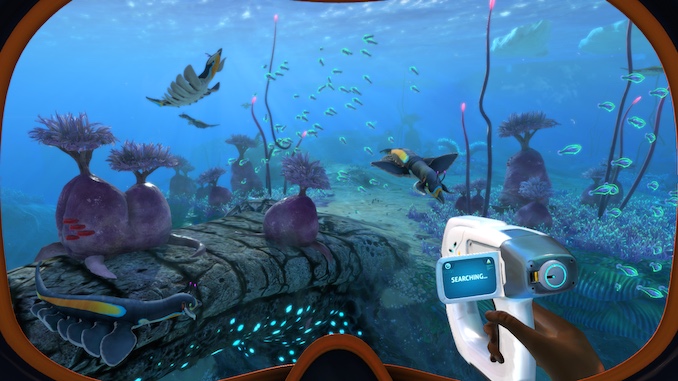 Subnautica and TLD also followed a similar path in one other, key respect. In the early years, both of these “early access” titles thrived in their open-ended survival modes, only to lose some of that charm the moment they grafted on a narrative. The joy of this genre is largely predicated on discovery: you keep pushing on, because you want to discover more things. You don’t need a compelling narrative to go along with it. And if Below Zero is any indication, the story can simply get in the way.

In Subnautica: Below Zero, you star as a scientist who has crash-landed smack dab in the middle of a frozen ocean planet, surrounded by bright, beautiful (and sometimes scary) aquatic alien life. Frankly, if you were to ask this reviewer what he wants in a game, “alien ice sharks” is pretty well the top of the list.

In that respect, Below Zero succeeds. I’m an occasional scuba diver, and I can attest to the wonder of coming across a school of fish, or trading a friendly hello with a curious seal. The Subnautica games do that, only with extraterrestrial takes on familiar sea creatures. (For what it’s worth, more earthbound gamers may prefer the PS4 title Stranded Deep, set in a Pacific Ocean teeming with an enjoyably unrealistic amount of aquatic life, the likes of which are rarely seen outside an Attenborough documentary.)

Below Zero is plot heavy, giving players specific, story-driven reasons for exploring more of the frozen planet, discovering more flora and fauna. But, much like The Long Dark‘s story mode before it, it also has a bad habit of aggressively pointing you in a specific direction and forcing you to do busy makework tasks. It’s one thing to go scrounging about for titanium because you need to craft a flashlight. It’s another thing to be told “collect X amount of Y” in order to unlock the next area. It’s content padding of the worst order, and reduces many areas into straightforward content grinds. 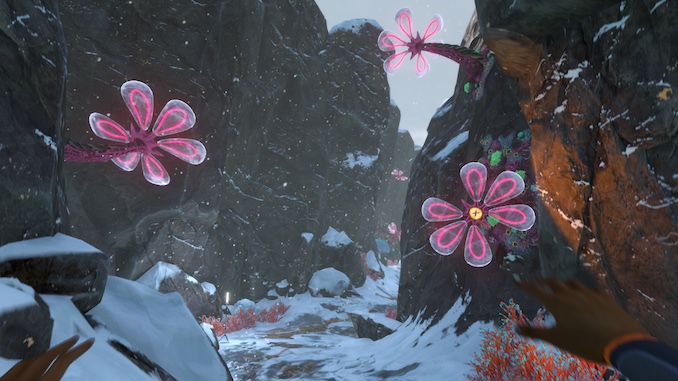 The original Subnautica was scary. It did a good job of making you feel alone, out of your element, and surrounded by the dark and deep. First-person-perspective is often a great way to immerse the player in a spooky environment. See, for example, 2017’s Resident Evil 7 or the harrowing Alien: Isolation. The sound design in Subnautica – the silence of the vast ocean, the whoosh of something, horrible, just behind you – was also first rate. Subnautica, somewhat unusual for the open-world survival genre, felt like survival horror.

Below Zero, on the other hand, will not. stop. talking. It’s a complaint I had about scuba simulator Beyond Blue last year – I want to listen to the calls of the space dolphins, not the AI companion constantly chattering in my ear. I also want to explore at my leisure, uncovering things – good or ill – on my own. I don’t need a copilot talking me through every step, let alone my own character’s endlessly grating monologue. Ironically, by playing up the narrative, Below Zero actually loses a lot of its forward momentum. 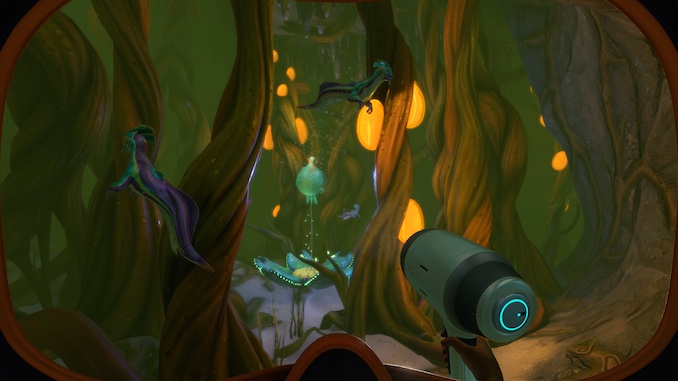 Look, alien ice sharks are always going to get my vote. And between Subnautica: Below Zero and Stranded Deep (now free on PS Plus!), I have my choice between the terrestrial and the extra- when it comes to underwater survival.

But if I were a stranded scientist, exploring that vast, frozen, alien landscape, sometimes I’d just want to be left alone, drifting silently among the space jellyfish and space whales. Too bad Below Zero keeps shouting in my ear.

Visit the official page for Subnautica: Below Zero here.

Maneater (PS4) Review: Do Go in the Water

Our review of Maneater, developed by Tripwire Interactive. Released on May 22, 2020 for PS4 (reviewed), Xbox One, Microsoft Windows, […]