Our review of Cyberpunk 2077, developed by CD Projekt Red. Kinda-sorta released on December 10, 2020 for PS4 (reviewed), Xbox One, Windows, and Stadia. 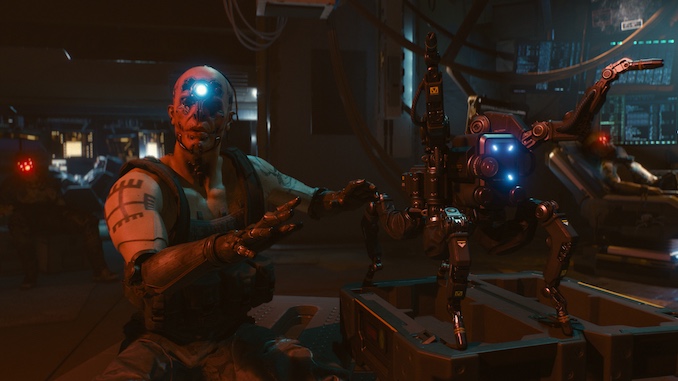 In fits and starts (sometimes literally). 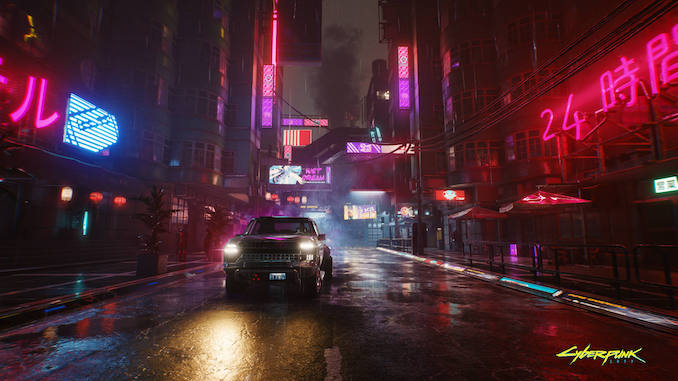 WHEN IS A GAME NOT A GAME

Our review of Cyberpunk 2077 comes at an odd time – about a month after its disastrous, glitch-plagued release, and about a month-plus-one-day after a lot of overhyped press outlets published glowing advance reviews that ignored its many, many problems. A lot has happened in that month, most of which is rather mind-boggling from an industry perspective:

It’s strange to be reviewing a game that exists in a kind of limbo: technically, it’s out there, and you can buy it from your local brick-and-mortar (curbside pickup only!). But it’s been banned from the PlayStation Store, and it’s unclear when Sony will again allow PS4/PS5 owners to directly purchase it. If ever a game came with a caveat emptor, it’s this one. 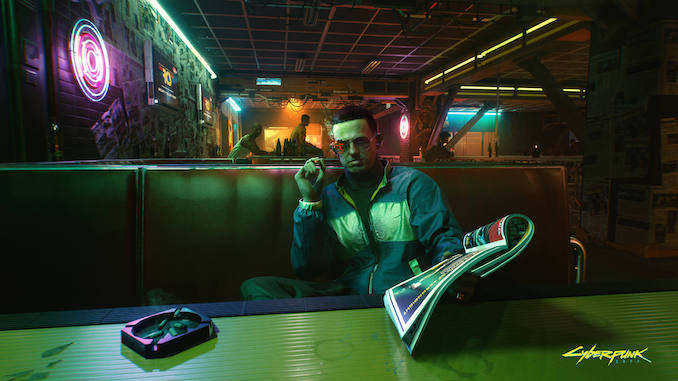 Cyberpunk 2077 is a nearish-future dystopian sci-fi thriller, centring around a vast conspiracy entangling everyone from the lowest street thugs to the upper echelons of neon-infused Night City (which, appropriately enough, looks a lot better after the sun goes down). Played from a first-person perspective, you control “V”, a character whose gender and origin story are established within a robust character creator and brief prologue chapter. V can be a high-powered Corpo (that’s what I picked), rough-and-tumble Street Kid, or a badlands-inhabiting Nomad, giving you access to different abilities and the occasional branching dialogue options. In truth, though, the only real difference is in the distinct 30-minute prologue for each character class – the rest of the game follows the same path, no matter who you control.

I’m going to spend most of this review griping, so I do want to say this at the outset: a lot of Cyberpunk is fun. It has cool, entertaining missions, and it’s worth exploring its large but not overwhelming world. A lot of the story is mush, but there are some nice character beats, unexpected twists, and things improve considerably once you meet Keanu Reeves (and, minor spoiler alert, get to control him). Combat is fun, if chaotic, and I like that you can easily switch between pure stealth and more aggressive strategies. Impressively, melee is a completely viable option: I spent good chunks of the game as a katana-wielding maniac, which really isn’t that common outside a Star Wars game or Red Steel 2.

To be fair, Cyberpunk 2077 does run somewhat better today than it did at launch: just call it Cyberpunk 2077 2021. Its technical issues are also less glaring on PS5 than on PS4. (To clarify – the game only exists as a PS4 release, but works on PS5 thanks to backwards compatibility. The actual PS5 up-port is indefinitely delayed.) 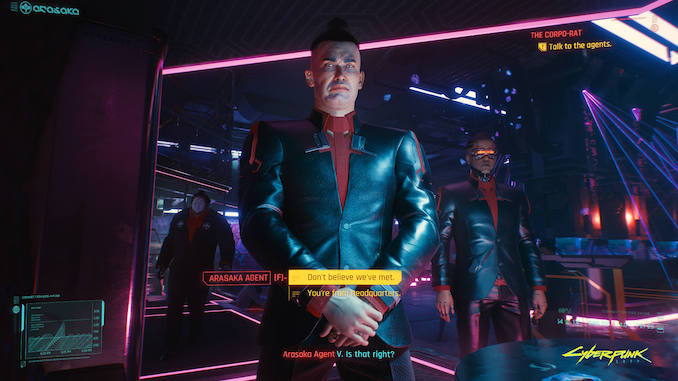 The Internet is rife with personal accounts of Cyberpunk breaking down, but all I can do is share examples of my own fun times: the game randomly crashing; the game failing to update an objective tracker; that time I got stuck on an office planter and died. The game also has an unfortunate habit of conjuring your self-driving car out of thin air. In theory, the car is supposed to drive up from off-screen, creating the illusion that it was parked just around the corner. In practice, Cyberpunk is programmed so lazily that at the tap of a button, the car just gets rendered into existence right in front of you. Sloppy. 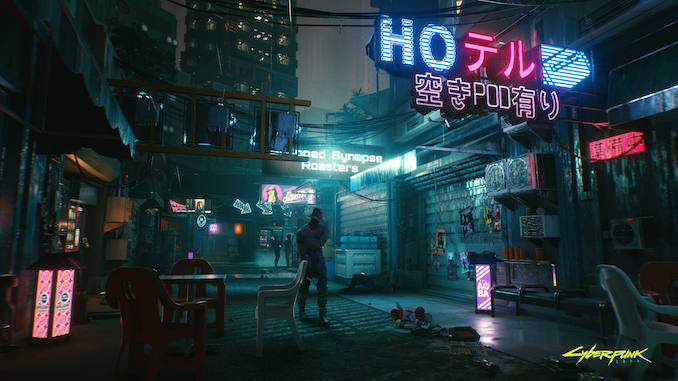 Cyberpunk is also poorly designed, and no amount of post-release DLC (or behind-the-scenes Sony strong-arming) is likely to fix its inherent design flaws. For example, it’s very, very hard to change your “active” mission: you can’t do it from gameplay, and the pause menu doesn’t always obey either. Cyberpunk also has bafflingly hidden menus: in one mission, I got stuck for 5 minutes simply trying to figure out how to look at an item I’d just picked up. It turned out I had to pause, go to a specific sub-menu, hover over a menu option, and wait until a hidden list of sub-sub-menus appeared.

Bizarrely, far too many Cyberpunk missions are paywalled behind in-game currency. Not real currency (thank goodness, there are no microtransactions to speak of), but in-game currency that can only be acquired through make-work side quests. It’s the laziest kind of content padding: at some point in a mission, a character will demand that you accumulate a large amount of in-game “Euro Dollars” in order to proceed. Perhaps it’s to buy a mission-critical item, or to bribe someone for information – but everything comes grinding to a halt as you’re forced to go make enough money to keep the plot moving.

Speaking of which, the illusion of choice in Cyberpunk is striking. Sometimes, like the above example, you’re forced to lay out cash even where you’d think there’d be an alternative like, say, stealing an item instead of buying it. Other times, you’ll be presented with what appears to be 2 or 3 dialogue options – “I think we should do X/Y/Z” – only for the game to constantly redirect to the only path that’s actually available. I kid you not, at one point I was given a clear binary: “Speak to X First” or “Speak to Y First” – but no matter how many times I picked Y, my AI companion would find ways to respond, “oh, I really think you should go with X.” It was as if CD Projekt was speaking directly to me, and it wasn’t pretty – especially when compared to the infinitely better Deus Ex series, which has been working with the same aesthetic, same gameplay, and actual “choose-your-own-adventure” scripting for a good twenty years. 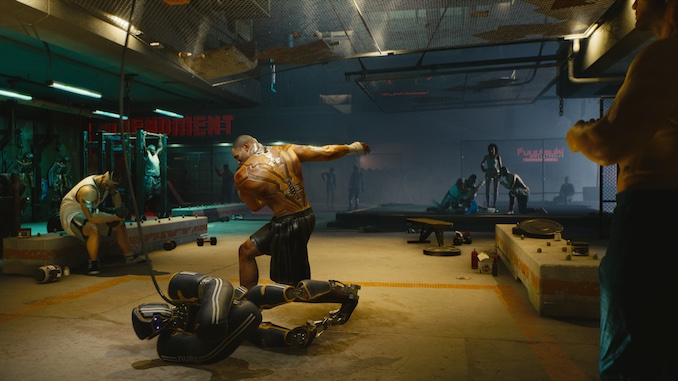 The most dystopian aspect of Cyberpunk 2077 is the option that allows you to remove copyrighted music from the game. If you’re asking yourself why this exists, the answer is: copyright-bots. As in, the overzealous copyright software that slaps takedown notices on game footage that happens to contain even a few seconds of licenced music (which in 2021 is a lot of games). Never mind that Cyberpunk is a showcase for lesser-known musical talents, who are probably grateful for the exposure. Never mind that Twitch and YouTube are the go-to places for checking out and presumably getting hyped on a new video game. No, CD Projekt says: stream this game only at your own risk.

Frankly, the devs could have put less thought into helping overzealous DMCA-bots, and a lot more into making, y’know, a functional game.

For all the fun I had with the Keanu’fied combat and story elements, the lack of polish in Cyberpunk really is inexcusable. This game was first announced eight years ago. It took so long to come out that it started to look like vapourware. (For more on vapourware, check out our review of the recent book, “The Games That Weren’t”.)

Cyberpunk is not vapourware, but it’s something like it: illusive, intangible, existing in a kind of liminal state – available for purchase, and yet not.

That’s a heck of an ignoble launch for the most overhyped game in recent memory, a game with real promise and, in certain places, actually quite enjoyable. I’ve heard that 2021 is supposed to get better – I wonder if that will be true for 2077 as well.