The Steam Whistle Gallery is calling attention to the very sins one may be abstaining from with its annual Good Beer Folk staff art show, featuring a variety of works including the painting series “ The 7 deadly Sins – Septic”. Attend the opening reception on January 6th, 2016 from 7-11pm at Steam Whistle Brewing, 255 Bremner Blvd. Toronto, ON.

“It’s a play on words,” explains Tamara of the title. “It’s septic because these are bad girls.”

Tamara started painting in her early thirties after returning from Europe where she worked as a mosaicist; creating remarkable works out of small painted pieces of marble. Once back in Canada, the demand for mosaic work wasn’t there and she tried her hand at a new medium- oil on panel. While not classically trained, Tamara sought out studios to learn from other artists.

“The use of oil on panel provides the ideal medium within which to explore and persuade each personality to reveal itself,” says Tamara of her preferred medium. “Working with the absorbing and resisting nature of oil on wood allows me to develop these ‘characters’ by scraping and layering until I have captured the nature and intensity of the moment.”

Tamara primarily paints figurative portraits which satisfies her need to explore her deep interest in people. “People fascinate me – it’s the reason I paint them and also explains my fondness for my career in sales,” she says. 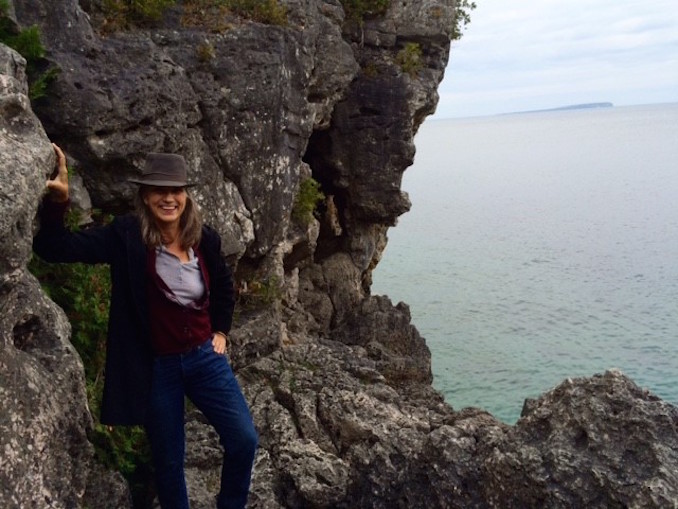 Tamara will be displaying her work with 15 other talented Good Beer Folk artists throughout January, showcasing a range of styles and media: photography, paintings, prints and more. Come join the opening reception Wednesday, January 6th from 7 until 11pm. Enjoy fresh ice cold Pilsner alongside complimentary snacks. Steam Whistle’s very own DJ Fields will be spinning.

Having lived most of my life in Toronto I am now living the country life. The settlement is called Ivy. It is as it suggests ivy covered, tree lined and quite motivational.

Aside from spending as much free time as is possible in the studio I am happily employed by the Good Beer Folks at Steam Whistle Brewing. I am able to drive around this incredibly beautiful province introducing my fellow brethren to Canada’s premium Pilsner. An I deal gig for me really – Tam, the open road and beer. Does it get any better?

I have recently been focusing on groups or series if you will. The paintings in the Steam Whistle staff show are of the bad girls in all of us. The seven deadly sins. A “septic”.

With this theme in mind I am working up a collection of high flyers. Women such as Ruth Nichols, Amelia Earhart, Marga Von Etzdorf and Ruth Law. These women were among other things inspirational and very impressive. Here is hoping they take off as I paint them.

I do have a web site at tamaracrist.com. I use this as a glorified filing cabinet and or bulletin board where I upload and show case some new paintings. People interested in what I do can reach me through this site and or email me at tamara@steamwhistle.ca

Fight To End Cancer (FTEC) is a local charity I have been happy to support for several years now. What […]

When you think of Canada, you may think of hockey and beer. In Toronto that would equate to The Maple […]