In 2007, Daddyo’s Pasta & Salad opened just a block south of Spadina and Bloor. The charming red and yellow corner lot restaurant is run by Jeffery and his partner, Shri, and is situated on the western end of the University of Toronto campus.

Jeffrey had been looking at the annex area for nearly 20 years, and upon opening, had no idea of how integral the role that the UofT students and faculty members played for small businesses in the area.

Before Daddyo’s was able to gain significant traction, the owners actually considered closing several times. Business was slow before they became a classic UofT pasta hub, but ultimately they had to decide that failure was not an option. 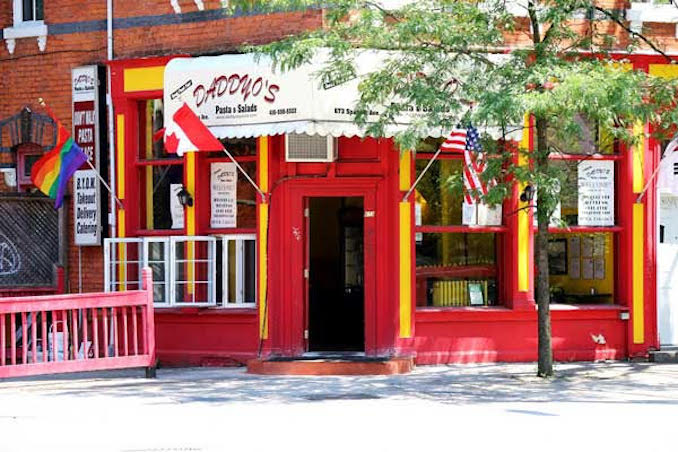 As the years progressed, Daddyo’s became very popular with the students surrounding it, and became more than just a quaint campus restaurant.

When you walk through the red door on the tucked away street, you enter a place of warmth and safety, somewhere that feels like home and brings comfort to many students as they endure some of the most stressful years of their young lives. Every year, thousands of new customers would pour in and continue to come back all the way throughout their undergrad. What is even more of a testament to the atmosphere that they have created, are the many people who continue to frequent Daddyo’s after graduating from UofT. Daddyo’s has truly created a community and a relationship with its customers, as they constantly engage with the going ons of the neighbourhood.

When you look up at the walls of the restaurants, you can see rows and rows of plaques, all displaying the donations and contributions that Daddyo’s has made to charities in the area, as well as support for the UofT Blues sports teams and University of Toronto Schools, the highschool affiliated with UofT that is right up the road.

As Jeffery told me, “It’s Daddyo’s nation, and everybody’s part of it. I’ve always respected my regulars, I’ve looked at my regulars as a community. When you put it in a situation like near UofT, I’ve been highly respectful because I love them, and they are my regulars”.

For the past several years Daddyo’s has been doing tremendously well, so well in fact that they were busy almost every night of the week with hungry college students in need of some mouth watering delicious pasta. “Up until the pandemic, we were enjoying probably the greatest success of my own personal business lifetime. We were doing what every small businessman dreams about, we had seen the results of our work and it was very good”, Jeffery said.

Unfortunately, once the pandemic began to escalate in March, the unimaginable results that they had been seeing were suddenly withering away, similarly to many small businesses in Toronto. Daddyo’s eventually “had to decide if we were gonna go forward with it, or just close up shop”.

Throughout this lag in business, Jeffrey described this covid anxiety that he felt. “For the first time in my life, I felt some real anxiety and depression over what’s going on.” One thing that helped them quite significantly, was UberEats. Previously they hadn’t been registered on the site because frankly, they had no need for it. However the thick of the pandemic it was one of the only things that kept them afloat.

In November, Jeffery made a video callout on social media explaining that the restaurant may not be able to survive on much longer without much business. Almost immediately, the video went viral as thousands of customers flooded social media hoping to spread the news about and save the long beloved restaurant. Within 2 days of the video being posted, the restaurant has been so packed every night, that they have been making nightly announcements that they have run out of noodles! “The last week has been totally insane!”, Jeffery exclaimed as he expressed his gratitude for the community who has rallied around them. “Right now I’m starting to choke up just think of the support, it’s been incredible! I mean people we haven’t seen in years and years!”.

After receiving over $3100 in donations, Daddyo’s has made an effort to take the generosity that their customers have shown and help other people, by launching the Daddyo’s Feeds Downtown Fund​. Jeffery decided that if people wanted to donate, Daddyo’s would take that money and buy Daddyo’s food at a good discount to give to the homeless and frontline workers in Toronto. This money would be divided into 500 meals, and be distributed by 80 meals per week. “This was an incredible opportunity to show the frontline workers support, and we’re gonna do the Scott Mission, and it’s just been an incredible opportunity to be able to distribute all of this joy”.

In collaboration with one donor who has experience in the health network and food distribution, and the Scott Mission charity, Daddyo’s will begin to distribute the meals through December starting on December 8th and then again after the New year. This initiative has been so far reaching, that they are even receiving donations from previous regulars who are now in all corners of the world such as China, India and South America – “all people who experienced Daddyo’s during undergrad have moved on, but I’m stuck with them in their head!”.

If you would like to order some delicious pasta and salads from the ​Daddyo’s menu​ please call or visit their location at ​673 Spadina Ave, and if you ​would like to donate to the ​Daddyo’s Feeds Downtown Fund ​please e-transfer whatever you are able to: ​pastaguy88@hotmail.com.

Help COVID Care Collective Provide Essentials to Those in Need

While the government is working to provide Canadians with the resources they need during the pandemic, there are individuals who […]

Give the Gift of Health To A Maskhole in Your Life with Maskholes.co

We all have to do our part to stop the spread of COVID-19 by wearing a mask in public areas. […]