Many of us are asking ourselves, what’s going on in this world? Global issues should be progressing yet there are leaders of nations who seem to be turning back time at warp speed. But what’s mind-boggling is to think that power abuse, discrimination, racism and bullying that took place in Notre Dame in 15th century Paris, are just as relevant today. Our eyes are on the latest musical theatre production of The Hunchback of Notre Dame. The performance by the Wavestage Theatre Company is set to take the stage July 6 to 8, 2018 at the Isabel Bader Theatre in Toronto. 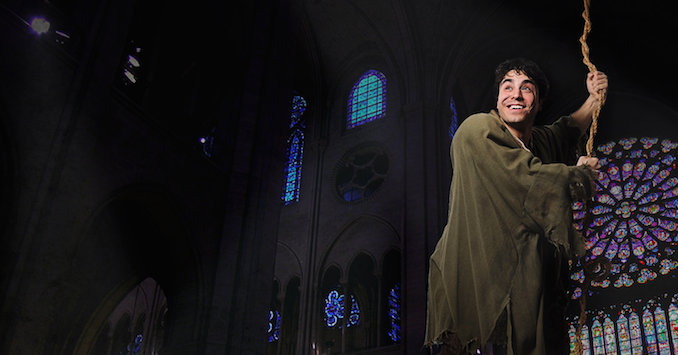 This production is a musical adaptation of the beloved Disney film. From Academy Award-winning composer and lyricist, Alan Menken and Stephen Schwartz, who individually created Broadway and film hits such as Disney’s Beauty and the Beast, Disney’s Newsies, Disney’s The Little Mermaid and Pippin, Pocahontas and Wicked.

The musical begins as the bells of Notre Dame resound through the famed cathedral in 15th-century Paris. The hunchback, Quasimodo, observes all of Paris reveling in the Feast of Fools. Held captive by his devious caretaker, the archdeacon Dom Claude Frollo, Quasimodo escapes for the day and joins the boisterous crowd, only to be treated cruelly by all but the beautiful gypsy, Esmeralda. Quasimodo isn’t the only one captivated by her free spirit, though – the handsome Captain Phoebus and Frollo are equally enthralled. As the three vie for her attention, Frollo embarks on a mission to destroy the gypsies – and it’s up to Quasimodo to save them all.

We had a chance to chat with Rhiannon Langford, Co-Director of the musical stage production of The Hunchback of Notre Dame as the cast and crew prepare for their Toronto premiere…

How closely does this stage production follow the Disney film?

RL: Fans of the Disney film will recognize its iconic songs such as “Out There” and “God Help the Outcasts.” However, this rendition is closer to the book than the film. Our Esmeralda, Alyssa Curto says: “It’s almost as if this show is geared toward the generation that grew up with the film, and it takes everything that the Disney film had and takes it one step further.” The piece commits to an adult tone, exploring some of the more mature themes that the film hints at. While mature themes are explored, fans of the film of all ages will enjoy this story.

How about comparing it to the original Victor Hugo novel? Lighter given the Disney association?

RL: This adaptation is based on the Victor Hugo novel, with a few creative liberties here and there. Thus, audiences can expect a dark and unsanitized rendition of what many think of as a classic Disney tale. We certainly do not shy away from the novel’s themes of sexuality, power, and religion.

Has the political environment of today made any difference in how you now see this classic tale?

RL: In today’s global climate ravaged by racial intolerance and fear of difference, we could not be happier to produce a show that unpacks how society views those who are different from ourselves. One storyline in this show follows a group of Romani ‘Gypsies’ and their journey of forced migration and persecution. They sing of wishing to “reach a friendlier shore,” yet 500 or so years after this story takes place, we still see horrific images of these migrant children being washed up on beaches. I hope audiences leave this show thinking about how we all need to offer compassion to others, especially to the migrants of today who face immeasurable hardship.

Tell us about the lead performer and how you selected him to play Quasimodo?

RL: We had over 200 people audition for this production, and most were vying for the title role of Quasimodo. However, when Nicholas Cunha, our Quasimodo, walked into our audition room, we knew he had something special to offer. We wanted audiences to break down their perspective of disability as they see the world through the eyes of Quasimodo. Nick is an exceptionally talented young man who brings a human voice to a character that many view as a monster. The warm and soothing quality to his voice really sells the story that underneath all the layers of disability, he truly is a man – and a kind and gentle one at that.

There are many messages in the story, tell us your favourite and why?

RL: This show asks the audience “what makes a monster, and what makes a man?” Is being a monster just being different from the norm? Or does the true monstrosity lie in the way society views those who are different? This show is written is such a beautiful way that when Quasimodo, the deaf and deformed bellringer, is by himself, his voice is pure and angelic and absolutely human. Yet, when he interacts with the outside world, we see him through the social constructs of disability; he is only a ‘monster’ because others see him as one. People are quick to judge one another, however, this piece speaks to how we are all truly human despite our differences. This show concludes that what makes a monster is what lies in someone’s character rather than their appearance or ability.

Anything you’ve woven into this production that makes it different from any other that you are aware of?

RL: I feel really proud of how our production has represented deaf culture. In the Victor Hugo novel, Quasimodo is a deaf character, so we wanted to explore how deafness would be approached in the 15th century, as well as make the show more accessible to our diverse audience. Through weaving American Sign Language into our choreography, we are able to offer an additional layer of communication and express this story in a multi-dimensional way. Theatre is meant for everyone, and all of us at Wavestage are thrilled to put on a show that promotes accessibility and inclusivity.

Summer is one of the most exciting times for food lovers to explore the city. With the many food festivals, […]

Interview with John Ross Bowie of Four Chords and a Gun

In 1979, New York’s iconic punk band, the Ramones, went into Gold Star Studios in Hollywood and started recording their […]