Canadian creators in television, film and web content gathered in Toronto this past week for Canadian Screen Week and the 2016 Canadian Screen Awards (The Candys) that took place Sunday night at the Sony Centre for the Performing Arts.

The week began last Monday as presenters, nominees and other creators in the industry arrived in Toronto with a busy week ahead of them. The week would see 3 awards shows – The Television and Digital Media Gala, The Academy Social: Celebrating Social Innovators and the Canadian Screen Awards which was televised on CBC.

On Tuesday, March 8th and Wednesday, March 9th, The Television and Digital Media Gala took place at the Westin Harbour Castle in downtown Toronto and saw The Academy of Canadian Cinema & Television  announce 50 Canadian Screen Awards and three Academy Special Awards in News & Sports, Documentary, Lifestyle, Reality & Digital Media categories. The nominations included a few of our friends and people we have previously covered. GIVER is a TV show that engages children in Ontario to give back to their communities and get active by building and renovating playgrounds. The TVO show was nominated for Best Children’s or Youth Non-Fiction Program or Series and we had previously covered the show when it was first starting. It is great to see the success of the show. Our friends The Water Brothers were also nominated for at the awards. They received nods for Best Science or Nature Documentary Program or Series and Best Cross-Platform Project – Non-Fiction for Dive Deeper. I was also happy to see the Best History Documentary Program or Series award go to Vietnam: Canada’s Shadow War (CBC) (Merit Motion Pictures) Merit Jensen Carr, Andy Blicq.

On Thursday, March 10, the Academy Social took place at 99 Sudbury and celebrated social media innovators. We were excited to see our friends Casie Stewart and Zach Bussey be nominated in the “Voice Pioneer” category. The night was hosted by eTalk’s Liz Trinnear and YouTube creator Jus Reign. Winners of the night included Kaitlyn Alexander (Realistically Saying) in the “Innovator” category, Casie Stewart for “Voice Pioneer”, Clean My Space for “Edu-Creator”, Tasha Leelyn for “Tastemaker Influencer” and Jus Reign for “Breath of Voice”.

On Sunday, March 13th, the Canadian Screen Awards show took place at the Sony Centre for the Performing Arts with host Norm MacDonald. The show recognized accomplishments in TV and Film from across Canada. We started the evening on the red carpet as guests arrived for the show. 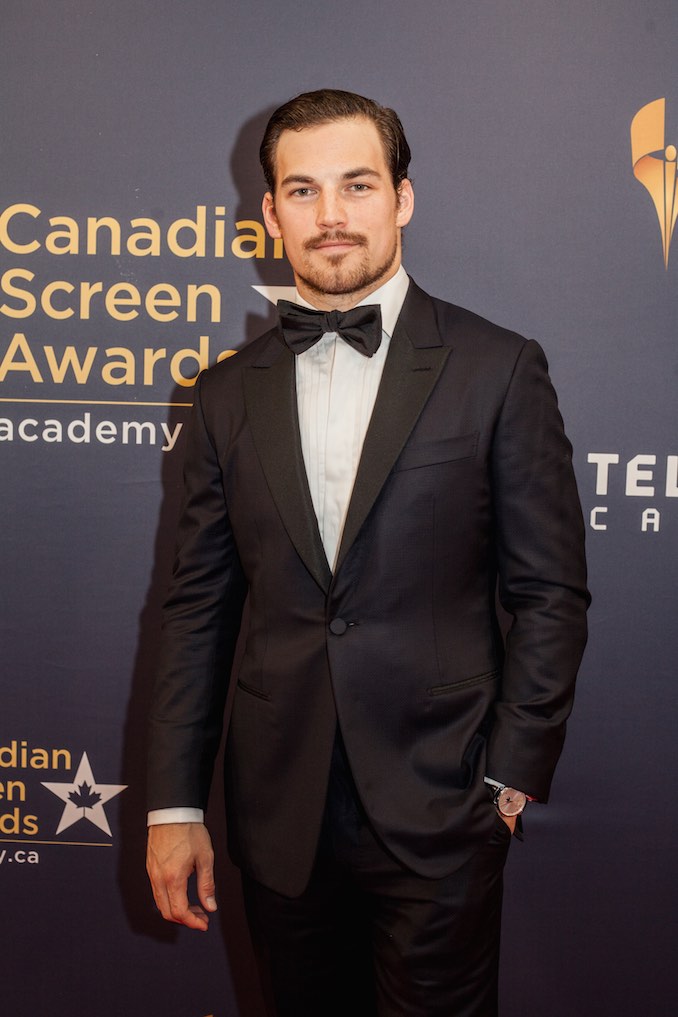 On the carpet, I got to chat with a few of the stars. Giacomo Gianniotti was born in Italy but raised in Toronto before moving to Los Angeles a year and a half ago. He had roles in both Reign and Murdoch Mysteries but recently landed his biggest role yet as Dr. Deluca on the ABC show Grey’s Anatomy. Giacomo said he treats the new gig like he does any other, allowing him to make a comfortable transition to the very popular show without it being too intimidating. The abundance of Canadians in LA also make him feel right at home.

I also got to chat with Yannick Bisson from Murdoch Mysteries who took home the Fan’s Choice award. His show is seen in 110 countries and he announced during his acceptance speech that a 10th season will be made. Great news for fans worldwide.

The night also introduced the idea of the awards now being called the Candys, in honour of late Canadian comedian and actor John Candy, who passed away in 1994.

Actor Jonas Chernick and visual effects man Darren Wall were at the awards for their work with the movie Borealis which follows an addicted gambler and his daughter who is slowly losing her vision. They journey to see the northern lights in this Canadian drama.

Here are some of the other people we got to chat with and photograph.

Winners and Highlights from the 2017 Canadian Screen Awards