Our review of Rock of Ages 3: Make & Break, developed by ACE Team and Giant Monkey Robot. Released on July 21, 2020 for PS4 (reviewed), Xbox One, Nintendo Switch, and PC. 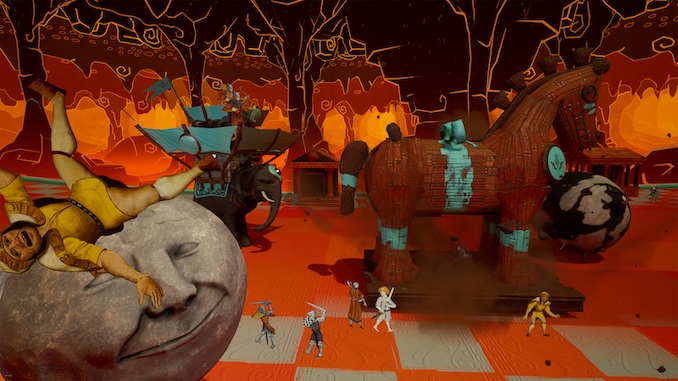 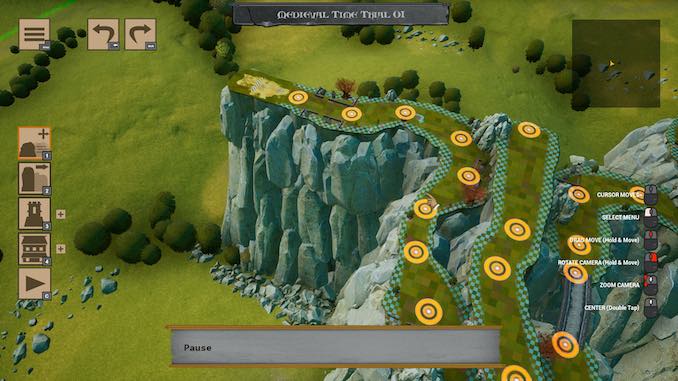 TO BE WITHOUT A HOME

Chilean indie studio ACE Team has carved out a silly little niche for itself with the Rock of Ages games. Since the series’s inception in 2011, weirdo gamers like me have been captivated by its trademark mix of irreverent humour, Gilliamesque art, and solid tower defence gameplay.

In Rock of Ages 3, you play as Sysiphus’s boulder, which, having escaped the confines of Greek mythology, is now rolling its way across human history, flattening famous historical and mythological figures in the process.

The game can best be described as a mashup between tower defence and classic “ball rollers” like Marble Madness or Monkey Ball. The goal in each stage is to smash through your opponent’s castle gates before they smash yours. Each “battle” has two alternating phases: a bird’s-eye view tower defence phase, in which players set up a trap-filled obstacle course aimed at slowing or even destroying enemy boulders, followed by a boulder-rolling phase in which each player races, in third-person view, through their opponent’s obstacle course. Traps run the gamut from sticky cows to battering rams to bouncing boards to giant elephants – and so much more. 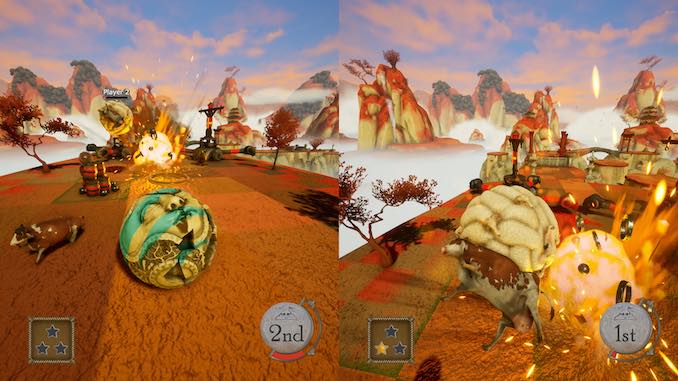 WITH NO DIRECTION HOME

Rock of Ages accomplishes the impressive feat of being both deeply irreverent and yet also reverential towards the source material that it (lightly) satirizes. Even as the game has you flattening paper doll cutouts of Queen Elizabeth or William Tell, the short cutscenes and stage-specific aesthetics reveal the developers’ grasp of the real (or mythological) history that each area is based on.

If you don’t know your Sisyphus from your Polyphemus, or you’ve never heard of 19th female pirate Ching Shih, Rock of Ages 3 is here to teach you some very brief and not entirely inaccurate history lessons. And it’s all told in an entertaining art style that uses cutout animations of real works of art (see next screenshot), all of which is rather pleasing to look at. 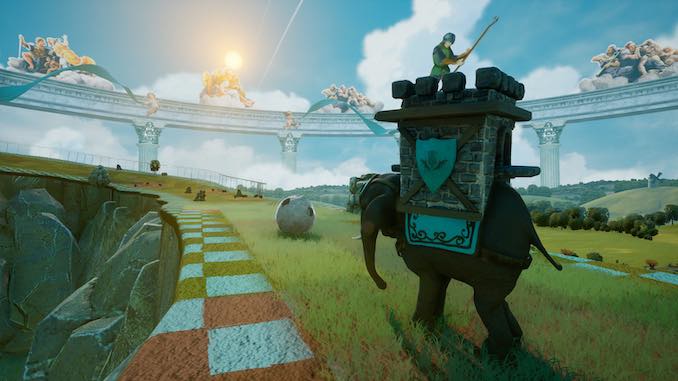 Rock of Ages 3 is satisfying.

The tower defence segments are a fun opportunity to test out different traps, which are unlocked at a steady pace during the single player campaign. Meanwhile, the boulder rolling sections can be quite thrilling as you race past aggressive mechanical bulls, crunch through towers, and weave through volcanic fields littered with traps.

Admittedly, the game can sometimes be clunky – I’ve gotten stuck on the environment, and the tower defence interface doesn’t always work perfectly – but on the whole it’s a breeze to get into and a joy to play. That said, the game does suffer noticeable slowdown whenever there’s a lot happening – which, with up to four players and dozens of moving traps on-screen, is more often than not. 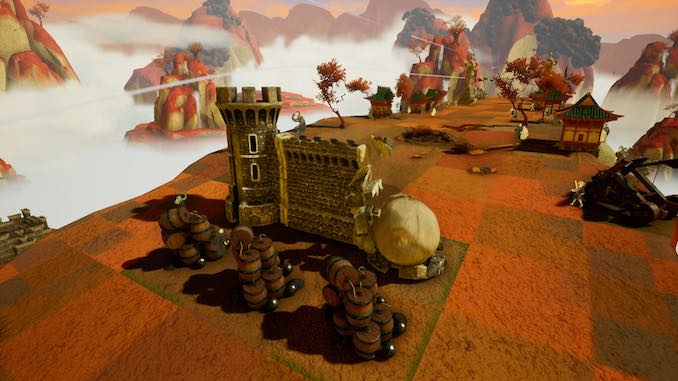 This being the third in a series, Rock of Ages 3 benefits from a newly improved physics system, along with the best and most diverse game modes to date. In addition to the classic tower defence battles, there are time trials, obstacle courses, trap-specific challenges, and a “skee boulder” mode which works exactly as you would expect. Plus, there’s a whole user-creation mode – and online ecosystem – that encourages more industrious players to design their own levels and share them with the world.

It’s a nice bonus for an already robust game, but even without the multiplayer or online elements, Rock of Ages 3 is a satisfying, weird, silly, funny mashup game for the art lovers and the history buffs and the Pastafarians (you better believe the Flying Spaghetti Monster plays a central role) and the black knights and the knights who say “ni!” and everyone else who’s up for a laugh and a lark.

Three games in, it’s a fine time for rock… and roll.

Visit the official page for Rock of Ages 3 here.

Our review of Street Fighter V: Champion Edition, developed by Capcom and Dimps. Available now for PS4 (reviewed) and Windows. […]

Ghost of Tsushima (PS4) Review: The Ways of the Warrior

Our review of Ghost of Tsushima, developed by Sucker Punch Productions. Available now for PS4. WHAT IS IT? An open-world […]

Shadow of the Colossus (PS4) Review: A Masterpiece Revisited

Our review of Shadow of the Colossus, developed by Bluepoint (original by Team Ico/SIE Japan Studio) and released on February […]