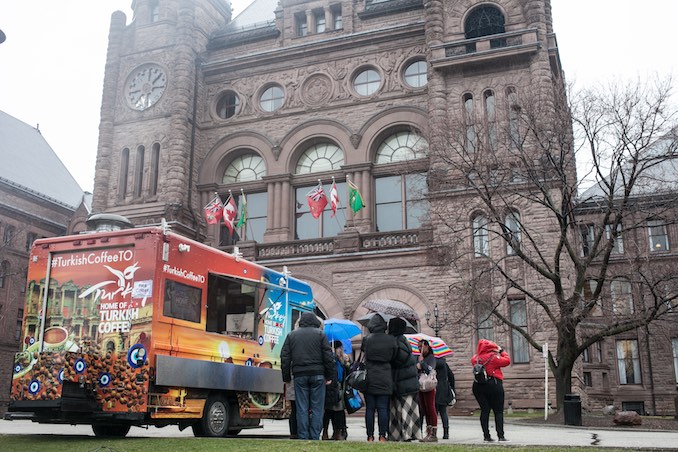 I wanted to learn more about the initiative and what it was all about so I chatted with a representative in Toronto from the tourism office.

The tourism and culture office in Toronto was recently opened to help promote Turkey’s culture and tourism amongst the Canadian public. Turkish coffee is a symbol of hospitality and was visioned as a great bridge of cultures as coffee is popular in both Canada and Turkey. The truck was also serving treats like Turkish delight for a sweet addition to the bitter beverage.

The truck was not only a cultural experience for locals but also a little taste of home for those that have Turkish origin. Some 20,000 people of Turkish origin live in Ontario alone.

I also found out that Turkey is the 6th most visited country in the world. More visited than the United Kingdom. I went there myself a few years ago and had such a great time. The country is very diverse with each region having its own landscapes, people and beauty.

Here are some Quick Facts on the Turkish Truck if interested:

3000 complimentary cups of Turkish Coffee were served
Stops included Union Station, Yonge and Dundas Square, Queen’s Park, Kensington Market, The Beaches and University of Toronto
This was the FIRST Canadian stop ever for the global initiative
The initiative was staffed by members of the local Turkish community in Toronto
The initiative was a partnership between the Turkish Culture and Tourism Office in Toronto and Mobile Turkish Coffee Truck Organization.

Turkish Culture and Tourism Office will also be at the Terroir Symposium for this year’s event focusing on Art, Culture and Technology.

If you do not know about Terroir, it is a not-for-profit committee of hospitality industry professionals that put on an annual symposium in Toronto. The annual event aims to educate, provide networking opportunities and build stronger international relations and community. Presenters, guests and representatives will be from the field of hospitality, including: chefs, food and beverage experts, writers and business leaders.

Here are some of the events involving Turkish cuisine.

-Afrim Pristine from the Cheese Boutique will host a cultural day designed to showcase Turkish food products and culture.

-Culinary celebration of Turkish gastronomy in a reception for delegates featuring

Who says we can only do a roast during the holidays? A roast turkey dinner is always a good idea, […]

How Steve Martin Became Guest Curator for Lawren Harris at AGO

We, the north, are very familiar with the works of Lawren Harris. As a Canadian artist, Harris is more often associated […]

For our first Homegrown Business article we are focusing on a local barista turned coffeeshop aficionado. It is great when you […]