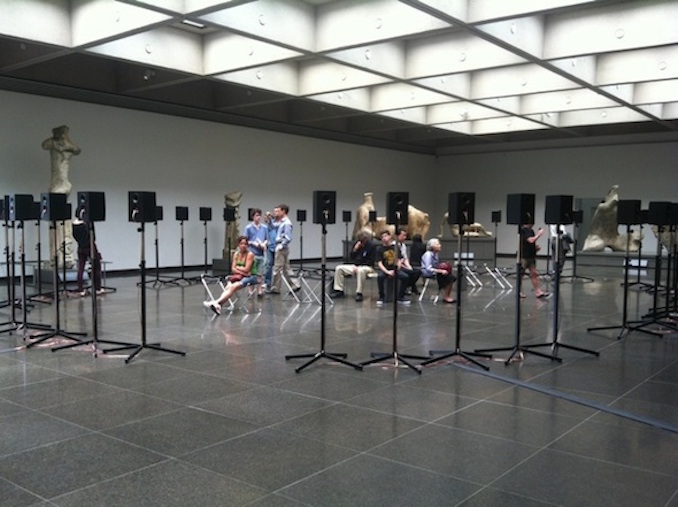 Currently at the Art Gallery of Ontario, Janet Cardiff is exhibiting many of her soundscape installations, all of which she collaborated with her husband George Bures Miller to create excluding “40 part motet”. The installations were co-curated by Kitty Scott, the AGO’s new curator of modern and contemporary art and Bruce Grenville, senior curator of the Vancouver Art Gallery. Cardiff and Miller have been exhibiting their installations since April 6th, and their works will leave the AGO on August 18th.

Cardiff and Miller are Canadian artists, currently residing in British Columbia. The spectacular artist duo began collaborating in 1995. Cardiff and Miller represented Canada at the forty-ninth Venice Biennale with their work, “Paradise Institute” (2001). There, the artists won “La Biennale di Venezia Special Aware” and the “Benesse Price”, which recognized the artists as pushing the boundaries of art.

Cardiff’s renowned, “Forty-Part Motet”, is located on the second floor, in the Henry Moore Sculpture Centre. This installation is on loan from New York City’s MoMa. The “Forty-Part Motet” is a sound installation, consisting of eleven minutes of Thomas Tallia’s 1573 choral composition, “Spem in Alium”. The musical score is played from forty standing speakers that encircle AGO visitors who sit in the middle. Those who walked around the inside of the circumference discovered that the forty-person-chorus was recorded individually. Tallia’s musical score is one of the most complex choral arrangements ever written, with a chorus consisting of eight, five-chorus groups. The success of Cardiff’s soundscape relied on the separate recording of each of the forty choral voices to render a breathtakingly full-bodied sound.

Once the polyphony had concluded playing, there was a three-minute intermission. While I was expecting three minutes of silence, the intermission consisted of a realistic rendering of a choral group taking a break. Sounds of coughing, nose-blowing, laughter and small chitter chatter were played through the speakers. When the voices became quiet, the singers would recommence.

On the fourth floor of the AGO, Miller and Cardiff are showcasing creative interactive experiences entitled “Lost in the Memory Palace”. Over the last twenty years, Cardiff and Miller have created the works that constitute “Lost in the Memory Palace”. The installation spanned over the entire floor of the David and Vivian Campbell Centre for Contemporary Art. In seven rooms, visitors opened doors that would traditionally be attached to domestic settings. Once inside, visitors roamed around the constructed rooms with video, sound and objects.

By arranging the installations as physical, interactive environments, “Lost in the Memory Palace” encourages visitors to become participants in the art works. Each unique room was dark, intriguing and exciting. Rooms were presented as if AGO visitors were intruding strangers, trespassing in another individual’s private space. The exhibition name, “Lost in the Memory Palace”, was inspired by an ancient memorization tool that associates ideas with specific physical locations. Cardiff and Miller describes “the memory palace method” as when a person walks through an environment and recollects facts and memories acquired in the past.

“Experiment in F# Minor” (2013) was created specifically for the AGO show and also my favorite work in “Lost in the Memory Palace”. The work consisted of a dimly-lit room with a table in the center that was covered in seventy-two exposed speaker cones. Upon entering the silent room, I began walking around the table, and the speakers began playing. I quickly discovered that my shadow was triggering sensors that were positioned across the table. As my movements became more rapid, the music grew into a crescendo.

Go see Cardiff and Miller before they leave the AGO! I highly recommend it for all art and music enthusiasts.

We look forward to visiting The Artist Project each year. It’s a great way to explore  the contemporary art scene […]

We’re thrilled here to see a competition that brings the art of doodling! Google launches this year’s Doodle 4 Google competition […]