Their latest, A Guide to Japanese Role-Playing Games has a perfunctory title that dramatically undersells its breadth and the quality of its insights. Have there been other such guides? Sure. But none has ever been such a deep-dive, with such impressive research and writing. It’s a must-have for fans of the genre, and an almost-must for gamers everywhere.

What is a Japanese Role-Playing Game, or JRPG, anyway? It’s the first question that A Guide to JRPGs asks, and it’s a question that’s repeatedly interrogated throughout the book. At its core, a JRPG is best described as Dungeons & Dragons translated to a digital medium, typically with stories told on grand, world-destroying scales. Is Legend of Zelda a JRPG? Arguably so, and certainly one of the kings of the Action-RPG genre. Demon’s Souls or Bloodborne? Absolutely, even if they’re heavily influenced by Western media and game design. There’s space for those games, and countless more, in A Guide to JRPGs, a meaty compendium of encyclopaedia-like entries devoted to almost all your favourite JRPGs.

The Fantasies (Final) and Phantasies (Star) are here in fine form, as are iconic series like Persona, Suikoden, and Dragon Quest. Some, like Final Fantasy, benefit from title-by-title treatment, dozens of pages devoted to overviews of each game in the series, alongside background information, anecdotes, and welcome attention to the names and personalities behind the scenes. If you don’t know who Hironobu Sakaguchi is, you will by the time you’ve finished leafing through A Guide.

I remember my first “proper” JRPG like it was yesterday: Final Fantasy X, released on PS2 in 2001, a game that I played despite my aversion to what I wrongly assumed were long, dull, turn-based affairs. While FFX was certainly long, and with one of the best turn-based systems around, it was hardly dull. It took me somewhere in the realm of 48 total game hours, spread across school nights and weekends, to bring Tidus and friends through their epic journey, and I loved every minute of it. Even if I sometimes had to pause boss fights for dinner.

FFX led me to FFVII – still one of the greatest video games of all time – and to the surprisingly effective FFX knockoff, Lord of the Rings: The Third Age (which gets its own entry in A Guide). I liked Chrono Trigger, adored EarthBound, and mostly liked Kingdom Hearts even though, quite frankly, it’s the weirdest squandering of a Disney licence I’ve ever seen.

One nice thing about A Guide is it got me thinking about all those JRPG-like games that I hadn’t previously considered as such. As mentioned, the Zelda series is here, as are the excellent Paper Mario games. The relatively obscure Parasite Eve gets an entry, even though it’s more survival horror than RPG (and even though A Guide‘s editors treat it with sneering condescension). I, for one, adore Parasite Eve, and I highly recommend tracking down a copy: its excellent story, of genetically modified creatures invading a wonderfully realized New York City, is paired with one of the best quasi-turn-based combat systems ever implemented.

I was also glad to see one of my all-time Top 10 video games, Okami, made the cut. Okami is the game that out-Zelda‘d Zelda and which, to this day, remains one of the most beautiful video games ever made. Its incredible Japanese watercolour art style is unmatched, and the entire game is steeped in Japanese folklore, giving it a suitable epic feel. If you’re only going to play one “Zelda” game, play Okami.

A Guide to JRPGs is comprehensive. While far from a complete guide, there are an astonishing number of titles showcased here, with very few obvious omissions. It does lean heavily towards the 8- and 16-bit era, which, combined with an emphasis on Japan-only releases, means readers may grow weary of the hundreds of games they have never heard of. Most of these entries you can skip, though there’s the occasional standout, like the parody game Love Quest in which combat takes the form of flirtatious conversations.

That said, there are some unfortunate oversights. Tomba! , the oddball 2.5D Action-RPG from Ghosts ‘n Goblins creator Tokuro Fujiwara, is missing, which is a real shame. Tomba! casts players as a pink-haired troll(?) with a penchant for hopping on pigs’ back, chomping down, then tossing them off-screen. It’s weird, it controls impeccably, and it’s unlike anything else. 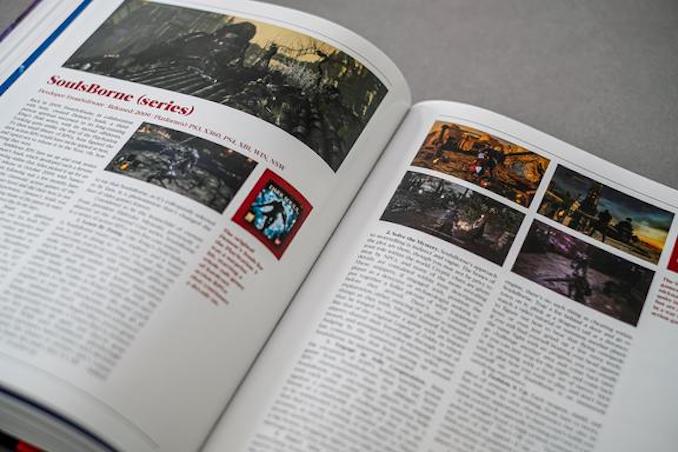 I’m far from a JPRG expert, but even I’ve made a point of playing the favourites. It’s a lot of fun to revisit them here, in a book put together by fans for fans with a great deal of love. Long-time JRPG aficionados will find nearly everything they’re looking for, conveniently just in time for the holidays. Casuals like me will still love the thoughtful writing, the attention to detail, and the behind-the-scenes info. A big fat spoiler warning is in order, though: if you’ve never played something like Final Fantasy VII (the original, not its dubious remake) please skip A Guide‘s entry and go play the game ASAP.

Same goes for any of the following, my Unofficial, Totally Subjective, Top 10 JRPGs:

Visit the website for A Guide to Japanese Role-Playing Games here.