Chef Hannah Che shared her recipe for Kung Pao Mushrooms from her book, The Vegan Chinese Kitchen – Modern Recipes and Stories from a Thousand-Year-Old Tradition. 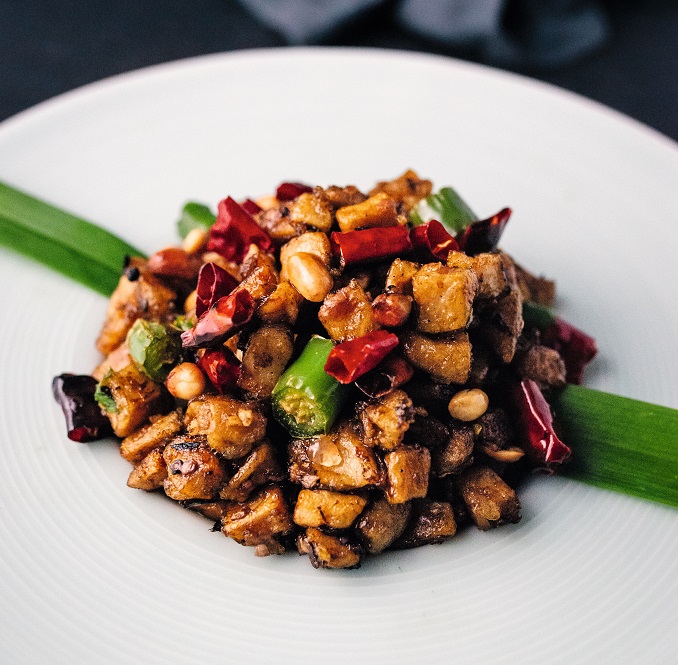 MAKE THE SAUCE: Whisk together all the sauce ingredients in a small bowl until smooth and blended.

MAKE THE STIR-FRY: In a large bowl, toss the mushroom cubes with the soy sauce, salt, and sesame oil, then let them rest for 5 minutes to release their liquid. Heat the vegetable oil in a wok over medium-high heat to 360°F (185°C), or until a wooden chopstick forms a merry stream of bubbles when inserted. While the oil is heating, check on the mushroom cubes—they should be damp. Add ½ cup of the starch to the bowl and squeeze the mushroom cubes to allow the starch to be absorbed. The mushroom cubes should still be slightly damp. Add the remaining starch and toss again, until each cube is coated with a generous amount. This will prevent them from sticking to each other when frying.

Fry the mushroom cubes in batches. Separate the cubes with your fingers as you drop them in to prevent them from clumping up. After about 15 seconds in the oil, the mushrooms will begin to sizzle and splatter as their internal water comes out. Stand back and wait until the splattering slows, then stir the cubes with a skimmer or spider until they are golden brown and crisp, about 2 minutes. Remove the cubes and transfer them to a paper towel-lined dish. Bring the oil back up to temperature and repeat with the remaining mushrooms. Pour the oil into a heatproof container for another use, reserving 2 teaspoons in the wok.

Return the wok to medium heat. Stir-fry the ginger and garlic until fragrant, about 30 seconds. Add the dried chiles and peppercorns and stir-fry until the chiles start to darken, about 30 seconds. (Make sure your kitchen is well ventilated, as this will give off a stinging smoke.) Add the scallions, chile, and mushroom cubes, then increase the heat to high and pour the sauce down the side of the wok, so that it sizzles on the way to the bottom. Toss for 30 seconds, just until the sauce coats the mushroom cubes and everything is piping hot. Stir in the peanuts, remove from the heat, and serve. 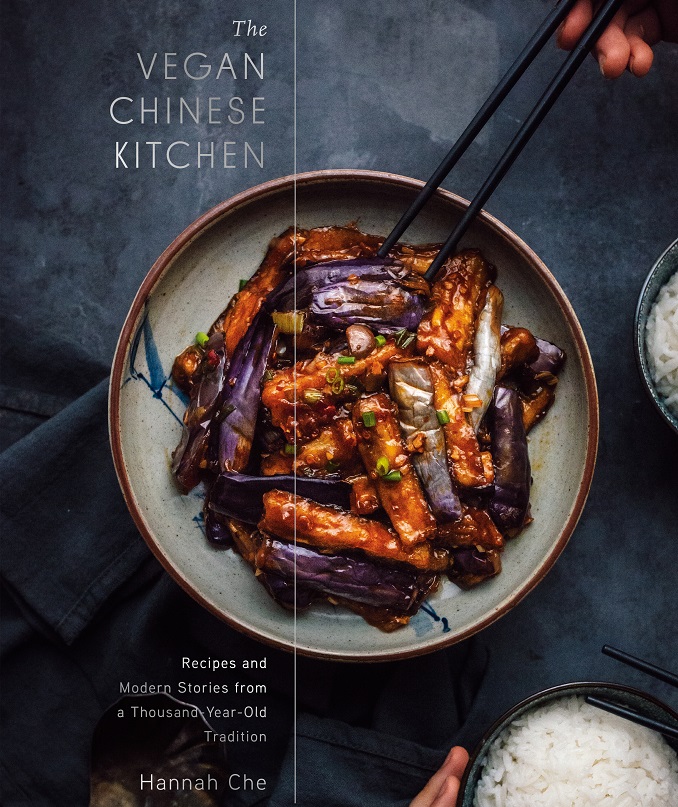 The Vegan Chinese Kitchen – Modern Recipes and Stories from a Thousand-Year-Old Tradition, By Hannah Che. Featuring over 100+ fresh, plant-based, umami-packed recipes for regional Chinese classics we all know and love.

Hannah Che is a cook, writer, and photographer based in Oregon, USA. Born and raised in Detroit, Michigan, she lived in China for several years with her family and most recently spent a year travelling throughout China and training as a chef at the Guangzhou Vegetarian Culinary School. She is the creator of the blog The Plant-Based Wok.

When Hannah Che decided to become a vegan, she was concerned that it would alienate her from the traditions and food that her Chinese family celebrated. But that was before she learned about Zhai cai, or vegetarian cooking, a fascinating subset of Chinese cookery that emphasizes umami-rich ingredients and can be traced back over hundreds, if not a thousand, years to Buddhist temple kitchens.

In The Vegan Chinese Kitchen, Hannah Che shows us the magic of the highly developed and creative tradition in which nearly every dish in the Chinese repertoire can be replicated in a meatless way, such as Blistered Dry-Fried String Beans, Sweet and Sour Tofu, Sichuan chilli-oil wontons, or using spicy mushrooms in dan-dan Noodles. As a graduate of the prestigious Guangzhou Vegetarian Culinary School – the only culinary institute in China dedicated to traditional vegetarian cooking – Hannah brings a strong sense of authenticity to the subject of plant-based Chinese cuisine.

In the book, readers will find recipes that are naturally plant-based with a rich culinary history that are as irresistible as they are nourishing. The Vegan Chinese Kitchen will delight vegans and omnivores alike, inviting them not only to explore a whole new world of flavours and ingredients, but also to create conversations about food, cultural traditions and identity, and wholesome, sustainable cooking.

This week, Chef Devan Rajkumar shared with us this Black Bean And Mango Salsa recipe for us to try at […]