The Redpath Waterfront Festival has returned with 2 days of programming along Toronto’s shoreline. The annual event was halted due to COVID-19 but has returned to Sugar Beach and HTO Park East after its hiatus. It has been 3 years since the last Waterfront Festival in its full form. A smaller version of the event last year had a walking trail along the shoreline with kiosks setup with QR codes and augmented reality. The goal of the festival, along with its partner the Waterfront BIA, is to promote the city’s shoreline and get people out using the area.

Events this year include concerts at Bayside Village Stage (Sugar Beach) and the RBCxMusic Stage (HTO Park), a visit from the Theodore TOO Tugboat at HTO Park East, a Toronto harbour Fire Rescue Demo, food trucks, local tourism and ecological society booths and a 16ft birchbark canoe from the Mississaugas of the Credit First Nation, to name a few.

It has been tough for event organizers with the uncertainty that COVID-19 has brought. Shutting down was one issue to deal with but knowing when it is safe and possible to start planning again can be even tougher.

I got to speak with festival Co-Producer Victoria Mahoney to find out more about the reopenning and the difficuties they faced. One of the toughest aspects of putting in the event seems to be the planning ahead of time without knowing what the future will hold.

“We usually plan a year out, at least. We operate in public parks so it is a lot of getting park permits, government grants. As long as we can get our park permits in and solidify the dates, we have an idea of programming.”

That programming is sometimes years in the making. Theodore TOO Tugboat wanted to come last year, if the event went on, so they have been in constant talks with them. Parks Canada and The Royal Canadian Navy have worked with the festival for years and always secure dates for them well ahead of time. Music and food can be organizaed at a later date, making the planning a lot easier. 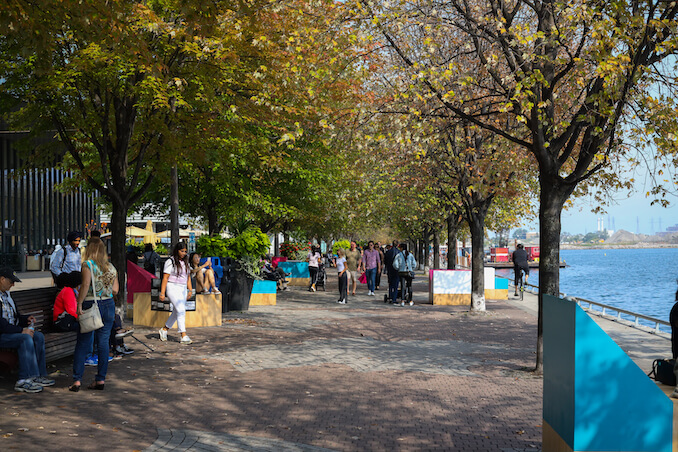 The festival location includes varying waterfront parks throughout the years. This year it is only HTO Park East and Sugar Beach but can include Sherbourne Common, Harbour Square Park, HTO Park West and Harbourfront Centre. These changes occur due to infrastructure, grants, construction, accessibility and sponsorships.