The moon is a glorious sphere admired from us here on earth. It’s an object that moves us in many ways – emotionally, physically, culturally and spiritually. We all have a connection with the moon, and with the 50th anniversary of the Apollo landing this year, the Aga Khan Museum unveils a new exhibition with it as the focus. The Moon: A Voyage Through Time offers a deeper understanding of and fresh ways to discover the 4.51 billion year old space wonder. The museum also brings us closer to the moon than we ever thought possible. 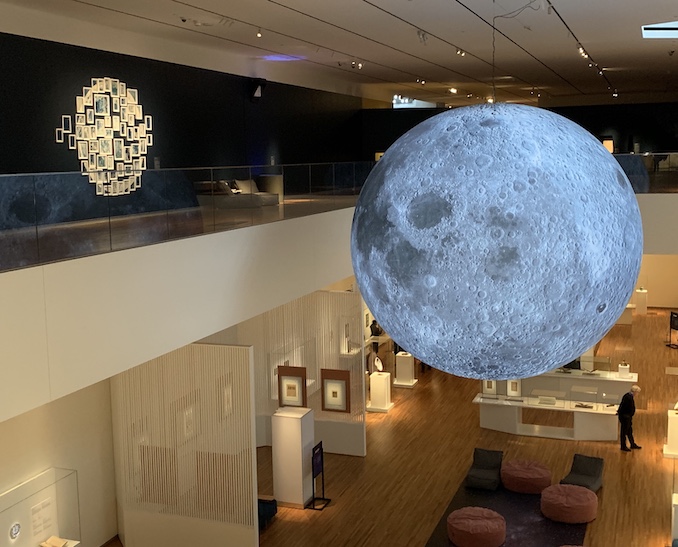 The Apollo Landing wasn’t just an incredible scientific moment in  history but also an emotional one. Many connect to the time and place by remembering where they were, what they were doing and what they were thinking. But there is an entire new generation who didn’t experience the excitement.

When you first walk into the exhibition space you see an actual piece of the moon that is on loan from the Royal Ontario Museum. It’s exciting, especially for younger visitors, to get close to a moon rock, walk through and explore the different aspects of the exhibition, and then finally view the massive moon installation at the end.

However, the moon exhibit extends beyond the science of it all. This exhibition features the moon in the context of its significance and influence in the Islamic world through arts and culture. The Aga Khan Museum invites visitors to explore and discover the connection between space and the lives of many through historical treasured paintings, artifacts and contemporary works.

The exhibition is categorized into three sections: Wonder, Religion and Science. Having said that, there is a fluidity to taking visitors through a journey of discovery.

“When we started thinking about what to do with the exhibition, we thought about how do we access people’s feelings about the moon,” said  Sarah Beam-Borg, Senior Exhibition Manager at the Aga Khan Museum . “We asked ourselves, ‘what is the moon?’ We thought about its wonder, knowledge, and its science. But also its love and its poetry. Some people view it as a male figure while others see it as a female. It is representation of a lot of things.”

Wonder: Beam-Borg explains through a walk-through about how part of this exhibition shines a light on how the moon is viewed and what may be interesting for people to learn. “Different parts of the world see the present moon in different orientations,” said Beam-Borg. “We here in our part of the world see it upright, however all across the Middle East the crescent moon is upward facing.”  Within the exhibition, the moon is represented in various forms from within paintings to structures including finials that are commonly found on top of buildings and structures. We see the same moon but in different orientations depending where you are in the world. In many of the paintings and poetry in the Islamic faith the crescent moon is often considered a vessel in which beauty is held. Moon halos are also found in many works of art particularly around religious figures and leaders. 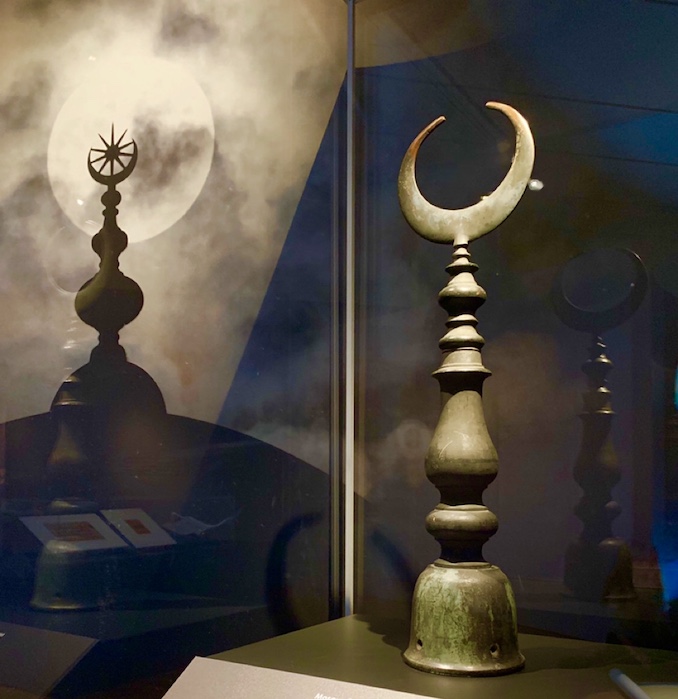 Religion: The moon is referenced many times in the Qu’ran and the exhibition highlights artwork and several artifacts of the verses that are worth delving into further.  “When the prophet Muhammad was asked to prove himself, he split the moon in half,” explained  Beam-Borg. “It was a very joyous day but splitting the moon was a very apocalyptic  moment because on judgement day he will also spilt the moon again.” 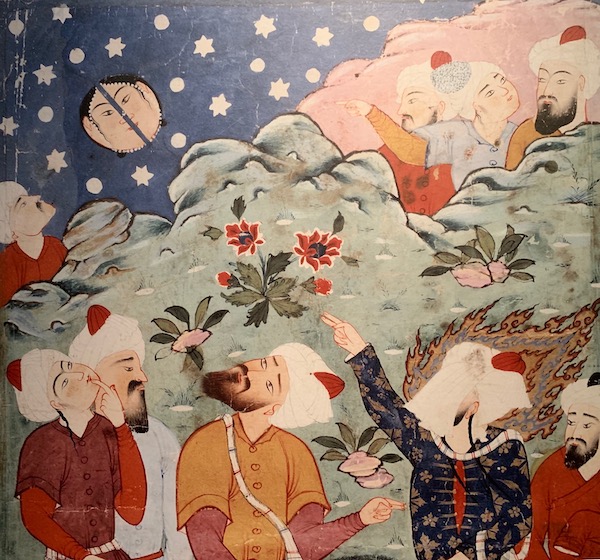 Science: Astrolabes are in a lot of museum collections. Used for both time keeping, calendrical work, and navigation – often used for nautical navigation, they are set with multiple plates that represent key cities at the time. The astrolabe allows you to use the stars  and horizons to set goals. “If you were a travelling muslim, it also enabled you to find Mecca and by using the astrolabe it ensure you would find your way.” said Beam-Borg. She explains in science a lot of the literature the museum was looking at didn’t differentiate between emotional science and fact-based science — astrology and astronomy are interlinked. The Museum wanted to bring that conversation to the table. In the scientific discussions often a fact is also sparking wonder and emotion which then often gets painted and written about. 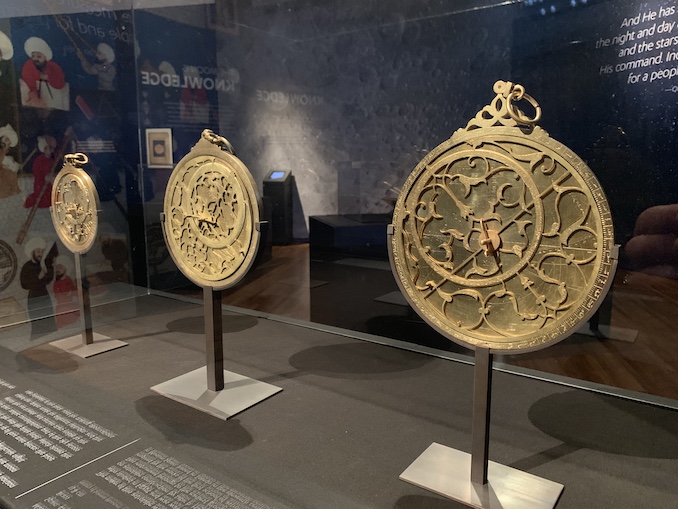 One of the things the museum discovered was how the moon is represented in two-dimension. “Because it is a sphere, you can see artists struggle with that in a lot of the paintings that we see in the exhibition. One of the things the museum really wanted to do was highlight craters on the moon that were named after Arabic and Islamic scientists,” said Beam-Borg. Over 300,000 that are visible on our side of the moon. The museum worked with a scientist who then identified the craters, focussing on 23 of them and those that they were named after. 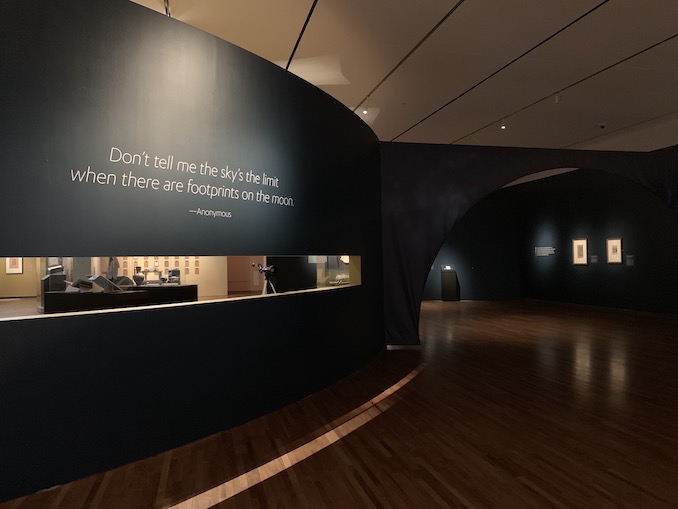 A few other highlights caught our attention:

Man and Woman: An interesting painting to note is the one of a female figure. The moon is often described as a woman in eastern literature – the beauty of a woman but we also more so consider the moon as a male figure here in the Western Hemisphere. Think “the man in the moon”.  When we viewed this painting, thoughts of a loving, nurturing, motherly figure came to mind. Others commented on how she looked as though she was frowning. Very humanizing in contrast to the scientific views of the moon.

Poetry: Beautiful historical and contemporary word paintings are also on display in this exhibition. People wrote poems describing the beauty of the moon in relation to the faith and culture.

Moon: Connecting the museum’s first and second floors, the massive suspended sculpture is an internally illuminated moon featuring detailed NASA imagery of the lunar surface. Created by contemporary British artist Luke Jerram, Moon gives visitors a chance to get a sense of being as close as possible to the rock in the sky. 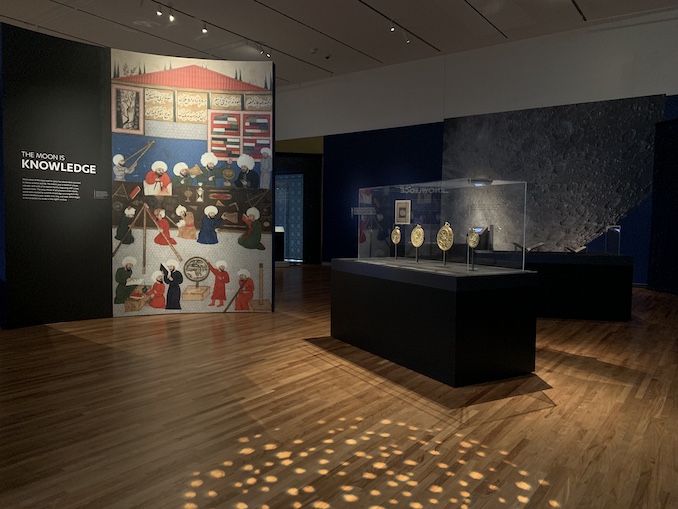 Hands-on activities are also scattered within the exhibition which is great for kids. NASA crafts can be created and taken home.

Several special events, performances and workshops are planned during the exhibition months. See their website for more details.

The Moon: A Voyage Through Time exhibition is now open at the Aga Khan Museum until August 18, 2019. For more information visit www.agakhanmuseum.org.

“A Day in the Life” with local artist Laura Thipphawong

Laura Thipphawong is a Toronto-based artist, writer, and historian. She has exhibited art in group and solo shows in several […]

Today’s daily photo is by photographer Jonathan Castellino. Check out his page for more images. “We all have the intuition […]