Our review of Kirby and the Forgotten Land, developed by HAL Laboratory. Available now for Nintendo Switch. 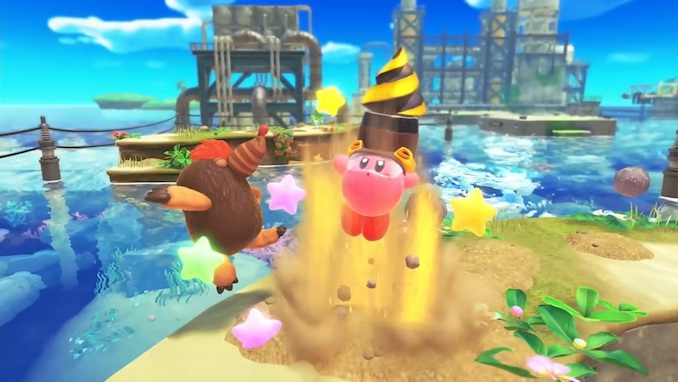 A boa constrictor eating an elephant. 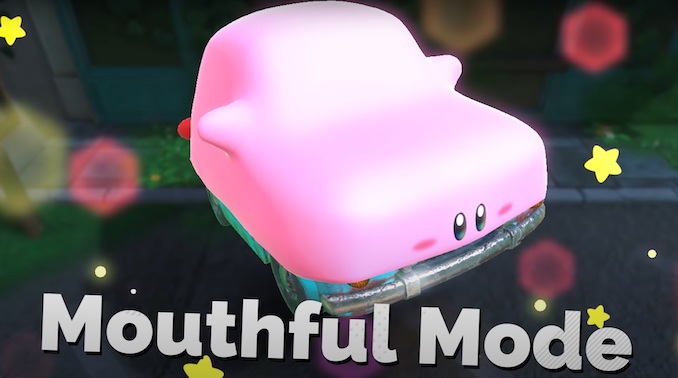 Kirby has always been something of a blank slate, not so much bringing anything unique to his (its?) games as adapting to the many quirky forms Nintendo imposes upon him. Kirby’s Dream Course is probably the best non-traditional golf game ever made, and the only thing “Kirby” about it is that the ball is the little pink puff himself. Epic Yarn is a delightful aesthetic experiment in which the world and characters are animated to look like crafting materials, but there’s nothing about Yarn that couldn’t work with other characters – a notion proved by the success of Yoshi’s Woolly World a few years later. Kirby is adorable, and he’s adaptable. That’s a fine thing to have in a video game mascot.

It’s the traditional Kirby games which have long struggled to assert themselves amidst a sea of other, better platformers – including fellow Nintendo stalwarts like Mario, Yoshi, and Donkey Kong. Kirby’s defining feature (aside from his gosh darn adorableness) is his ability to hoover up enemies and copy their powers. That’s always made for an enjoyable gameplay mechanic, Kirby swapping from fire breath to spiky ball to hammer-wielding maniac all within the space of a single level. But take away the creepy-cute imagery of Kirby inhaling foes through his gaping maw, it’s really not so different from collecting power-ups in any other platformer. Combined with lackluster level and enemy design, and you can understand why most “traditional” Kirby games are barely remembered today.

With little in the way of competition, new Switch title Kirby and the Forgotten Land is the best traditional Kirby since Kirby Super Star back on the SNES. It’s fun and kindhearted and kid-friendly – especially in its co-op mode – and rather a soothing balm after the stress of the last several years and/or Soulsbornes. Will Forgotten Land be remembered by the time the next console generation comes around? Perhaps not, but it’s an enjoyable little platformer that does everything you’d want it to, while introducing some neat gimmicks in the process. 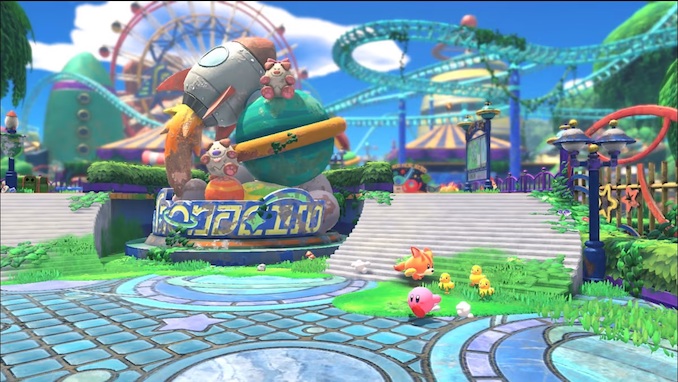 Who knew that the cure to our post-lockdown blues would be an old school platformer, replete with thousands of coins and dozens of secrets squirrelled away in every level? Kirby and the Forgotten Land is unapologetically old-fashioned. Levels are short, brightly-coloured jaunts through lovingly designed environments – a wintry wonderland, a lush jungle, a sparkly beach – that could have been ripped from any 3D platformer from Super Mario 64 on. As in past mainline Kirby titles, there are enemies you can inhale and spit out, copying their powers. As in, like, any past 3D platformer, there are delightfully hidden secrets which reward the curious, along with challenging but fair boss battles, and a few Crash Bandicoot-style chase sequences. A lot of the fun is in completing the game’s barely-concealed challenges – eat 3 snacks, say, or make 5 tulips bloom – and, for the completionists among us, looping back and tracking down the last few secrets, aided by the game’s generous hint system.

Forgotten Land also strongly resembles Switch system-seller Super Mario Odyssey. Obviously, the “copycat” ability was Kirby’s long before Mario donned his Cappy hat, but it’s Forgotten Land‘s “Mouthful” ability which owes a huge debt to Odyssey. At regular points throughout each level, Kirby will encounter larger inanimate objects which, for the first time in Kirby history, he’s able to possess. The Forgotten Land launch trailer drew a lot of meme-worthy attention for the scene where Kirby envelops a car in his giant pink maw, and let me tell you, it’s just as disturbing/hilarious when you’re in control. Kirby can also “become” a traffic cone, a vending machine, or a dozen other objects. Many of the best puzzles involve some novel use of the Mouthful ability, like when Kirby possesses a staircase and waddles around looking for high perches to climb to. There’s nothing quite on par with Cappy possessing a T-Rex in Super Mario Odyssey, but each Mouthful is amusing and helps to shake up the otherwise bog-standard platforming. 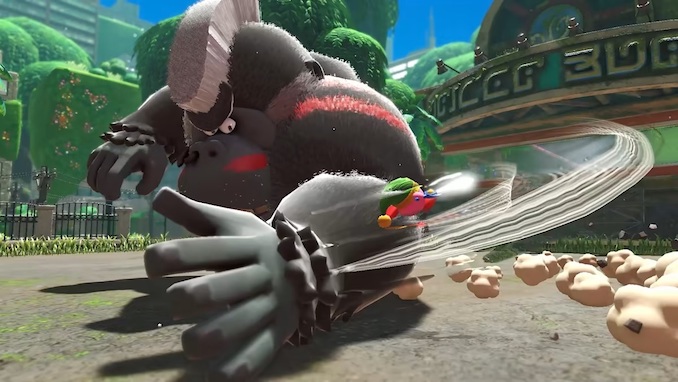 AND THE ABYSS GAZES BACK

Call me old-fashioned, but I was overjoyed to discover that Forgotten Land is a manageable length, clocking in at no more than 12-15 hours, depending on how much time you spend tracking down hidden collectibles. Not so long ago, I had a blast romping around the short and sweet stages of classic Spyro, and it’s been nice hanging out with a new Kirby game designed to be played in short bursts. Levels can be completed in mere minutes, so even if you wind up seeing the same enemies or ideas repeat themselves, nothing overstays its welcome.

In the end though, the mere sight of Kirby’s distended jaw, wrapped around an elephant-sized object, is worth the price of admission alone. Le Petit Prince would approve.

Visit the official page for Kirby and the Forgotten Land here.

Our review of Spyro Reignited Trilogy, developed by Toys for Bob. Released on November 13, 2018 for PlayStation 4. WHAT […]

Our review of Mario Strikers: Battle League, developed by Next Level Games. Available now for Nintendo Switch. WHAT IS IT? […]