Our review of Gran Turismo 7, developed by Polyphony Digital. Available March 4, 2022 for PS5 (reviewed) and PS4.

It is Peak Auto. 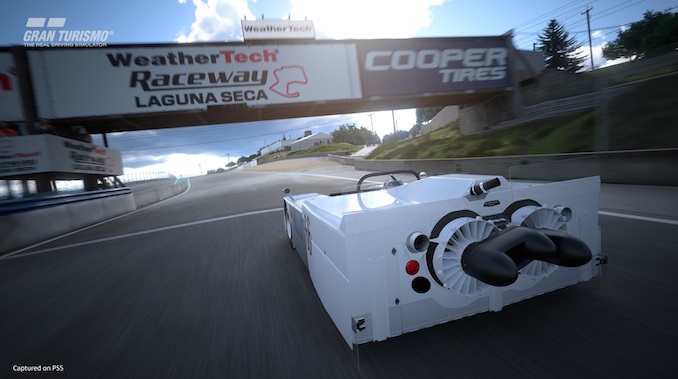 That’s a testament to the commitment of developer Polyphony Digital, and the trust placed in them by their corporate overlords at Sony. Arriving nine years after Gran Turismo 6, the hotly anticipated Gran Turismo 7 proves them right. GT7 is Polyphony at the top of their game. It is the racing game we were born to play. 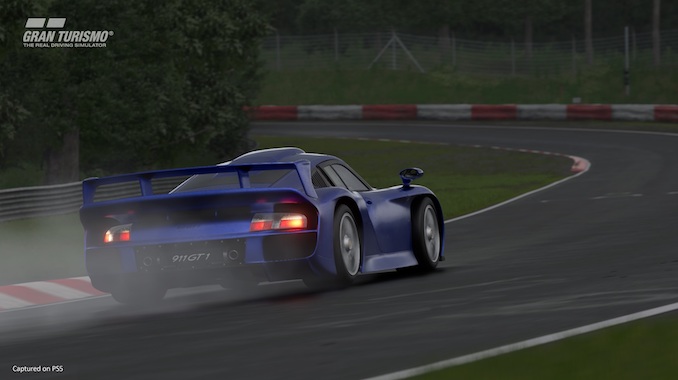 GT has long styled itself “the real driving simulator.” That’s both a promise to players, and a sly knock against its countless competitors. Other racers may be fun, or beautiful, or have more licensed cars, but, Polyphony says, our game is real. It looks as real as we can get it, and it plays as real as our simulated physics system allows. That was true back in 1997, when the first GT blew our 32-bit socks off on PS1, again in 2001 when GT3 was the definitive racer for the PS2 generation, and it’s true again now. GT7 is not lifelike, but it’s a graphical and gameplay accomplishment on par with Ghost of Tsushima. It looks amazing, it plays realistically, and its expansive – and expensive! – car collection would make Jerry Seinfeld drool with envy.

GT7 is well aware of this. In the same way that Pokémon isn’t really about fighting monsters, GT7 isn’t really about racing cars. Don’t get me wrong, it’s glorious fun to do so, and much of the joy comes from trying out each new vehicle and new track you unlock at a steady clip across its single-player campaign. But the point, really, of GT7 is the very act of building out that collection. One of the first things you’ll encounter is an empty menu with row upon row of faded out cars. You can see the contours of each vehicle, along with its national origin, but that’s it. For some gearheads, that will be enough – oh damn, there’s the Lancer Evo IV, and is that the Trueno? – but for any player, it’s a tantalizing glimpse of the roster of vehicles you’ll be working to unlock over the course of the game. Returning to that menu again and again as you fill out the GT7 equivalent of a Pokédex is incredibly satisfying.

GT7 also knows how good it looks. It delights in its after-race video replays, which slightly cheat the in-game graphics to make things look even more realistic. It also has several dedicated photo modes, including one truly mind-boggling one in which footage of your virtual car is superimposed on video of real world locations. The effect is just shy of photorealistic, only the slightly mismatched lighting between background and vehicle any hint that the scene is artificial.

And then there’s the racing. 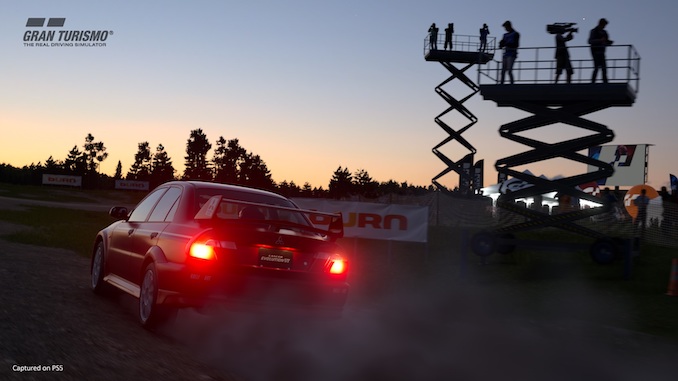 Much like a real car, there’s far more going on under the hood in GT7 than I could possibly understand. All I know is that the obsessives at Polyphony have spent decades studying the internal makeup of every vehicle that goes into their games, and visiting every real-world racetrack to measure it down to the millimetre. The cars in GT7 feel like real cars. The tracks in GT7 look like real tracks. And that attention to detail also means you really need to understand how racing works. The in-game licence tests help a lot; they’re basically tutorials that force you to learn a particular technique in order to progress. But so too are the “menu books” which drive the campaign.

At any given time in GT7, the new GT Café (an in-game hub which looks like a café) will assign you a set number of tasks to complete, in the form of restaurant-style menus. Generally, these tasks funnel you towards races where there are big, welcome rewards like new vehicles and new tracks. Your objectives are always clearly marked, with bright orange target symbols pointing you to the correct activity. Each time you complete a menu, you’re treated to a nice bit of edutainment, as the café owner talks you through a brief history related to the task you’ve completed. For example, collect the 1965 Mini-Cooper S, the 1966 Volkswagen Beetle 1200, and the 1968 Fiat 500 F, and you’ll be treated to a short discourse about classic European compact cars. (Rather admirably, Polyphony resists the temptation to make an Italian Job joke.)

Once you’ve completed all 39 menus, you’ll have a hefty collection of cars and, if you’re wise about it, enough in-game currency to purchase some of the more exciting cars available at GT7‘s two dealerships – one for modern models, and one for classics. Not nearly enough to buy everything, however: that’s what the generously-rewarded races and not-so-generous microtransactions (shudder) are for. 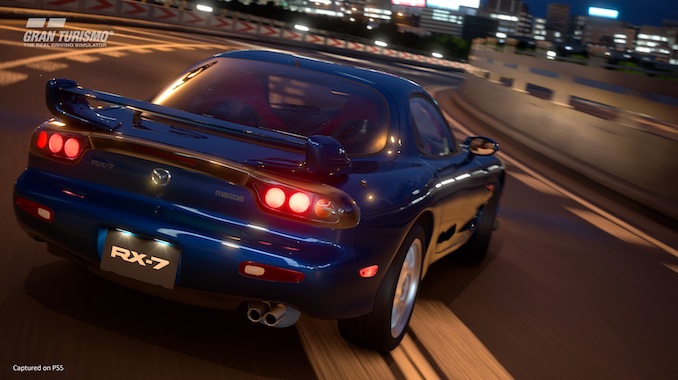 GT7 is about as customizable as you could want; the only thing missing is the ability to swap out your driver for a digital recreation of Steve McQueen or Ryan Gosling.

To begin with, every single thing about a vehicle is fully customizable, from internal parts to paint jobs to the many different tweaks you can make to a car’s body, such as fins, modified bumpers, rims, and so much more. The game’s dynamic weather and day-night cycles are impressive when encountered during the campaign, but what’s even cooler is that you can fully customize climate conditions any time you create your own race. It’s neat to tweak things like the hour of day, or the probability you’ll encounter certain weather patterns.

The gameplay interface is also satisfyingly customizable. The very first thing I did was adjust the cockpit view to the highest possible angle – I’m a very tall dude, and I wanted a familiar perspective when I’m driving. I also turned off the driving line, that on-screen indicator designed to guide lesser players along the ideal route for each track. Most importantly, I deactivated the entire HUD – no on-screen speedometer, no list of other cars, no lap indicator. That way, it’s just me, my car, my opponents, the road, and the believable if not entirely lifelike environments.

On that note, a special shoutout to GT7′s stunningly realistic clouds, although the best graphical conditions are definitely in GT7’s evening/nighttime tracks. Whatever magic Polyphony worked with the lighting physics, there are definitely moments, driving through downtown Tokyo after hours, or zipping along Laguna Seca at dusk, where a passerby could easily mistake GT7 for the real thing. 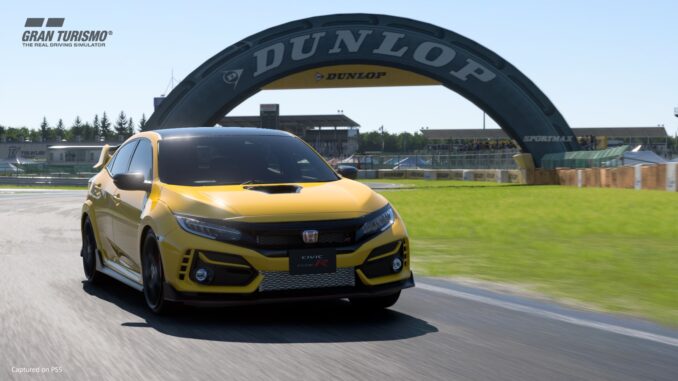 GT7 maintains a proud tradition of excellence, but it also retains some of the worst aspects of its predecessors. Splitting the difference between the best and worst of GT is its soundtrack, an eclectic mix of smooth jazz, classical remixes, and a genre that can only be described as Truly Terrible Rock.

As for some of the game’s worst aspects, Polyphony remains irrationally averse to damage modelling; no matter how much you smash into other cars or straight into a wall at 300 kph, at most you’ll see some light scratches and maybe a hairline fracture on a headlight. As in previous games, GT7 also lets you skirt through most of its single-player mode by relying on the fastest car available. Since races aren’t typically locked to any particular specs, you can simply pick your most powerful car in the relevant class, and blow the competition out of the water. Sometimes, I deliberately picked a slower vehicle, just to make it more interesting. Of course, online multiplayer levels the playing field somewhat, but if you find yourself breezing through the single-player campaign, you’re not the only one.

Speaking of online, there’s a plethora of online modes building off the solid base of GT Sport, that online multiplayer spinoff I mentioned earlier. Weirdly, though, GT7 is always online, even though single-player shouldn’t require it. The game gives no good reason for this, although the obvious one is that insidious Digital Rights Management (“DRM”) technology has once more infiltrated a beloved game. It’s totally inexcusable. As is, hey, GT7‘s exploitative microtransaction system! A quarter century’s worth of goodwill, and all it took to squander it was some fake currency to spend real-world money on. Microtransactions suck! GT7, you didn’t need to do this!

DRM and microtransaction concerns aside, GT7 is a fine addition to the racing game pantheon. Its single-player campaign provides enough of a spur to keep collecting new cars and new tracks, while its genre-leading graphics make GT7 a marvel to play and to watch. For GT8, though, I demand to see my cars explode.

Our review of Untitled Goose Game, developed by House House. Available Now for PC/Mac (reviewed) and Nintendo Switch. WHAT IS […]