Caardia is the Canadian alternative-pop sister duo made up of singer/songwriters Annie and Celia Siriopoulos. The duo became recipients of the FACTOR Artist Development Grant in 2019 and was named one of CBC Searchlight’s Top 10 Teens to watch in 2020. They were also selected to showcase in Canadian Music Week 2021. These creative empaths’ music reflects life in a genuine, realistic, and recognizable way – designed for soulful listening and thought. After seeing a need for reliable information for youth, they began a radio show called “The Caardia Show” on Agape Greek Radio. Their first EP, “The Deep End,” was produced together and co-written with Ryan Guay and some by Adam Tune.

Their 2019 single, “Walking Away”, was made with JUNO/CCMA award-winning music producer Chris Perry. Caardia’s new EP includes the singles “Over You,” “Cherry Soda,” and “Complete,” produced by multi-platinum music producer Roy Hamilton III at The Singer’s Company. 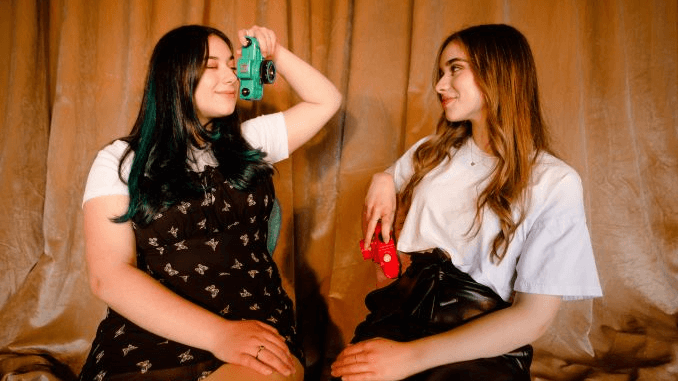 We have released one EP and are in the process of completing our first full-length album.

Harness Your Hopes by Pavement

Singing “Good as Hell” by Lizzo right before going on stage to hype ourselves up.

Night owl all the way!

As of right now, definitely studio. It has been our comfort place and a great escape.

We are almost finished with our first full-length album with Roy Hamilton III of The Singer’s Company. This project is the first showcase of our full creative control and shows the new “Caardia sound”. We are also performing at the Wintersong Music Festival which is taking place on March 11-12, 2022.

Riverside Burgers! (best burgers in the TO)

Main Street Unionville because of its comforting atmosphere, and is especially beautiful in the nighttime around Christmas. This is also one of the first places that we were hired to perform as live street entertainment, so it holds a special place in our hearts.

Christie Pits Park because that is where we held Youth Jam TO, the musical festival we co-founded and co-organized in 2018 and 2019. It overall just has a great environment and is always lively with music (and the swings are fun too lol).

That’s difficult, but if we had to narrow it down, it would be between the Rivoli on Queen St W and The Supermarket in Kensington.

Without a doubt, Sonic Boom! Record collecting is one of our favourite hobbies.