In the spring of 2016, mutual dog lovers Natalie Panacci and Julia Wittmann agreed to start a band (so their dogs could hang out more). With Zachary Stuckey, Bradley Connor, and Candice Ng, they created For Jane: a five piece ‘dog’ rock/pop band based in Toronto. The group blends the catchy with the complex, humour with sincerity, and punchy rhythm with calculated chords. The music may best be characterized by the unique vocals by Panacci and Wittmann. Gentle and flirtatious one moment, soaring high and strikingly full the next. Together, the voices produce a mesmerizing harmony. 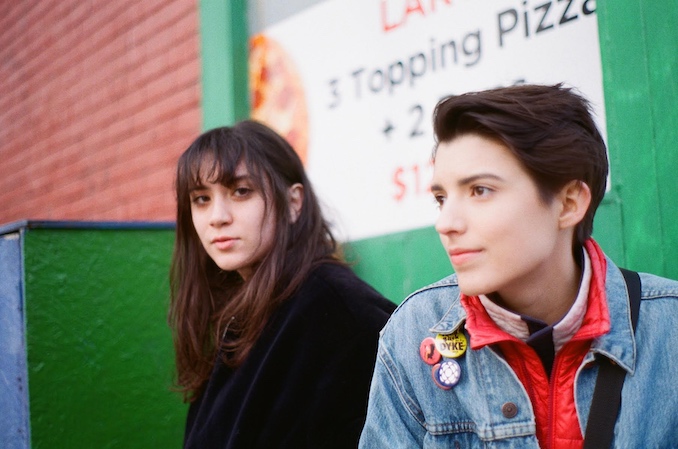 The versatile musicianship of the supporting members are equally vital to For Jane’s sound. Stuckey and Connor’s rhythm section could keep audiences captivated all on their own; their precision and intention show extreme professionalism. Seen live, their performances are a sweet sight to behold. Wittmann’s guitar and Ng’s keys produce standard pop tones with the sensibility of alt-rock players (seemingly quite educated in the likes of St. Vincent, Mitski, Metric, etcetera).

For Jane’s debut EP Married With Dogs was released in November 2018, and the single “Car” has since been featured on CBC Music and The Edge.

Radiohead, Hop Along, Lamp, Death Cab for Cutie, We Are the City

I’m With You – Avril Lavigne

Making several small pees in the bathroom, mingling the nerves away, sitting in the corner and looking upset (someone asked Candice if she was ok at our last show), and the Cinnamon Roll (all band members put their hands together in a circle, roll them together with a hand on top, throw them in the air and yell “CINNNNAMONNNNN ROLLLLL”)!

Mixed votes. I guess you’ll never find us all tanning in the same park at the same time.

The night owls in the band outweigh the early birds.

Studio. But Brad votes for Road four times over (road road road road). For Jane hasn’t actually hit the road before… but we really, really want to!!

And June 6th at the Baby G.

“Five Minutes With” Toronto’s own Pop Duo Your Paris

Nick Babcock and Laila Kharouba make up your new favourite pop duo, Your Paris. Praised for their poignant lyrics and […]

Melissa Lamm loves pop music. Although she is both a classically trained pianist and graduate of Carleton University’s Music program, […]