I had first noticed Tenfed at a shop I often frequent called A Kind Heart in Toronto. They carry brands that are associated with giving back in some way. When they had mentioned that Tenfed was founded by two Torontonians, I made note. 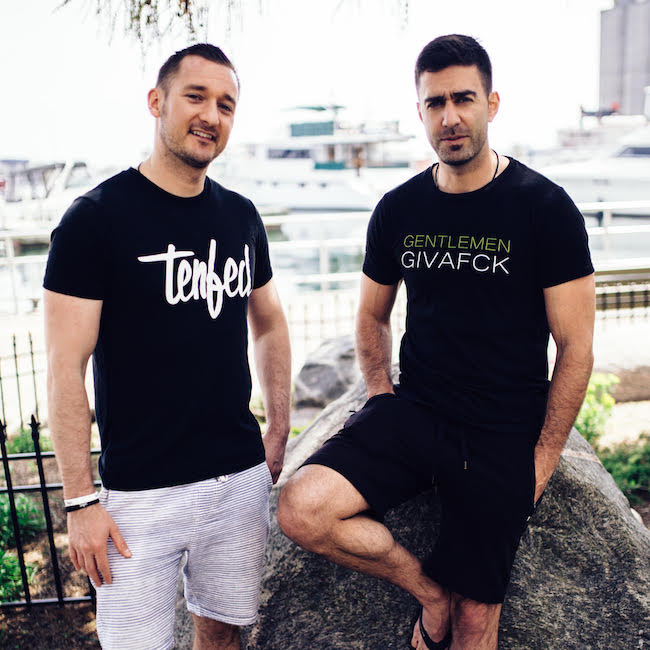 In the shop they carried Tenfed’s soft shirts (made with sustainable fabrics) and candles. Each item sold meant that the organization could provide TEN meals to feed hungry children here and around the world. TEN!

But when COVID19 hit, that required the organization to adjust like everyone else. Yes, they are still providing ten meals for every item sold and currently all the meals are distributed within Canada.

Being home more than ever before, it seems like quite a few of us have turned to more comfort wear. Tenfed also gives us comfortable options with purpose.

During the month of March, Tenfed is raising awareness with their #Marchto10000. The goal is to provide 10,000 meals by the end of this March.

The company started in August of 2015 by long time friends, Kory McLaughlin and Mike Wallis.

Both were working long hours, one in the corporate world and the other running his own landscaping business.

Like many of us, they had the idea of one day doing something more fulfilling, meaningful and impactful in the world. So, they turned their energy into finding ways to help feed the hungry across the globe. The one-for-one concept was good but what if they could do greater? The idea of one-for-ten became a mission and a reality.

But why apparel and lifestyle goods? I was curious so I went directly to Kory to learn more.

So, why this approach?

Kory: When it came to the decision to do T-shirts and hats, to be quite honest, it just seemed like it was a simple thing to do.  Create a t-shirt that once people purchased, it would help others.

That was our thoughts on it. We knew deep down that we wanted to create something that we could have passion for that would also help others in some way.

So, with that in our minds, we created a company called PASSION12 where we would partner with a different charity each month and create some cool t-shirts for them.

We found out very quickly that it was difficult to change your target market each month.  So one charity that we had connected with, Kids Against Hunger Canada seemed to really like what we were doing. We decided that we were going to offer to work with them exclusively and create a brand around feeding people. There are many causes that are worthy of our attention, and we decided that hunger was a huge one that somehow humanity hadn’t figured out yet…  So it made sense to do this.  That is how Tenfed came to be!

How did you both determine the concept of ten?

Kory: This one was pretty straight forward. As we were having conversations with the charity, we were trying to figure out what cost we would be able to give back in the form of meals without shooting ourselves in the foot to being able to create a thriving business. We eventually determined that 10 was do-able and of course had a good ring to it. It was that conversation where the name Tenfed actually derived.

What do you wish people knew about running a social impact business?

Kory: This list could go on for a while too! There is definitely a level of fulfilment that comes along with it. Knowing that you’re helping some type of cause while you run your business. Social impact is slowly becoming the norm. It seems as though in due time, you will be looked down upon if you do not have some sort of social impact connected with your business. I believe that at the core of everything we do, we should be focused on creating an impact on the lives of others. That will stem down to treating the planet better for future generations as well.

One thing that I find to be very important that I believe people should know, is that it doesn’t have to be DIFFICULT to run a social impact business. Just begin incorporating some type of give-back into what you do. Don’t think that you need to be the most successful business on earth. Don’t compare with other businesses and try to compete. Just build something that you have passion for that helps other people in some way. Period. Enjoy the process. Learn as you go. The rest will take care of itself.

How has COVID19 impacted your organization and what you do?

Kory: When COVID first hit, Tenfed was doing about 40 events, trade shows, and markets per year. That accounted for about 85% of our business up until that point. So right off the bat, we had lost majority of our business, BUT, it was a blessing in disguise as it forced us to really learn how to move our brand Online. We began focusing on online sales, partnerships/collaborations, and wholesale a little bit. So although it impacted us financially in a negative way at the beginning, it gave us an opportunity to grow in the right areas. Now we are focused on a more sustainable way of doing business which has helped our business.

If you could be granted three wishes, what would they be?

Kory: This is a really good question. I am in a seemingly interesting spot in my life. I really don’t want much at all. Love. Understanding, Joy. For my friends, family and for as many people as possible to feel those things as well.. along with peace. I suppose I would wish for a societal structure that was more inclusive to all humans and lives for that matter. A system and structure that actually cared about the wellbeing of people, lives, and the earth rather than power, money, and so called success.

Kory: I am inspired by so many people. I’m inspired by anyone that I see that is working on becoming a better version of themselves. Doesn’t matter what “Level” they are at in that journey. Just seeing the effort to become better is always very inspiring and uplifting. Some specific examples that I can think of right now. Jim Carey. Mike Tyson, Mother Theresa, Tony Robbins, Joe Rogan, Bob Proctor, Wayne Dyer, Alan Watts, Ram Dass, Russell Brand, my father, My business partner (Mike), my brother, my grandfather. I find inspiration through a lot of people, so I will leave it there for now!

If you’re interested in learning more and where to find their goods, including their iGIVAFCK line (I Give A Food Care Kit) visit Tenfed.com

By the way, the clothing is manufactured in factories that are WRAP approved – this means they are audited regularly (unannounced) to ensure they commit to fair hours of work, have no child labour in their factories, provide their employees fair compensation based on the local labour laws and commit to a healthy and safe workplace.

On February 23rd, the 8th annual Recipe For Change event will feature over thirty of Toronto’s top chefs, brewers and […]

Career fairs are often the backdrop of anxiety, shyness and discomfort; finding the courage to speak with a representative from […]

Through their mission to feed and educate, La Tablée Des Chefs hopes to have a positive social impact on communities. […]