Our review of The Pathless, developed by Giant Squid Studios. Released on November 12, 2020 for PS5 (reviewed), PS4, Windows, macOS, and iOS.

It’s fun in small doses, but can get aimless over longer sessions. Thankfully, it’s short enough not to overstay its welcome.

People who love Journey (my all time favourite video game) and/or its spiritual successor ABZÛ, but also have the patience for mystifying puzzlers like The Witness or Myst.

The Pathless‘s painfully accurate title should serve as a warning for players raring to go on their brand-new PlayStation 5: this game is slow, it’s meandering, and you will be lost much of the time. Offering only the barest of tutorials and next-to-no hand-holding, it drops you into a lushly illustrated fantasy world littered with mysterious ruins (and runes), and asks you to wander and wander some more.

Superficially, The Pathless may remind you of Journey, or developer Giant Squid’s own ABZÛ, for which it acts as a kind of pseudo-sequel. But unlike its predecessors (Giant Squid was founded by a bunch of devs who worked on Journey), The Pathless is a much more action-oriented game. Not so much combat, though there are some epic boss fights, but in the twitch reflexes it demands across its vast, puzzle-platformer stages.

I enjoyed my time amongst the crumbling landscapes of The Pathless, but I also had to take it in small doses. It’s simply not the smooth, relaxing experience I expected it to be – which is fine, but it’s something you need to be prepared for.

YOU CAN PET THE EAGLE

In The Pathless, you play as a mystical archer tasked with restoring light to a land blighted by an evil demon. There’s a story here, if not a particularly original one, that has your “Hunter” protagonist wandering massive open maps, collecting light orbs that can activate “purifying” towers. You do so primarily through environmental puzzles that rely on your bow-and-arrow and on your pet eagle, which can help carry objects. (And yes, you can pet the eagle.) Movement is fluid and very satisfying: by firing at floating totems that dot the map, you can rapidly glide and vault your way forward, almost as if you’re riding a skateboard. Activate enough towers, and you unlock the local boss fight, a multi-stage battle against an epic, and intimidatingly large, foe.

The bosses are neat, and remind me of the colossi in fabled PlayStation title Shadow of the Colossus (my second-favourite video game of all time), if smaller and less puzzle-oriented. There’s a giant elk, a giant lizard, and a couple more I won’t spoil. As in Shadow of the Colossus (original Japanese title: Wander and the Colossus), the boss fights are the only combat you will contend with in the entire game. The rest of the game is built around exploring: searching every nook and cranny for light orbs, trying to solve environmental puzzles. Expect to step on a lot of pressure plates, shoot a lot of targets, that sort of thing. You can also expect to spend just as much time tracking down the puzzles as you do solving them.

A good gauge of how you’ll feel about The Pathless is whether you’re the type of player who just wants to get from Point A to Point B, or the kind who sees a seemingly impassable cliff and, rather than turn around, tries to brute-force your way up it by glitching through the environment. The Pathless is very much a game designed for the latter: while some puzzles are easy to find, others are so obscurely located that you’ll often find yourself questioning whether you’re on the right path in the first place. Most of the time, the answer is yes, and you’ll be rewarded for your perseverance and your proficiency with the game’s exacting double-jump and hover mechanics. Sometimes, however, the answer is no, and that’s frustrating. There’s nothing worse than spending half an hour trying to clamber up a hill, only to find out there’s nothing waiting for you at the top. 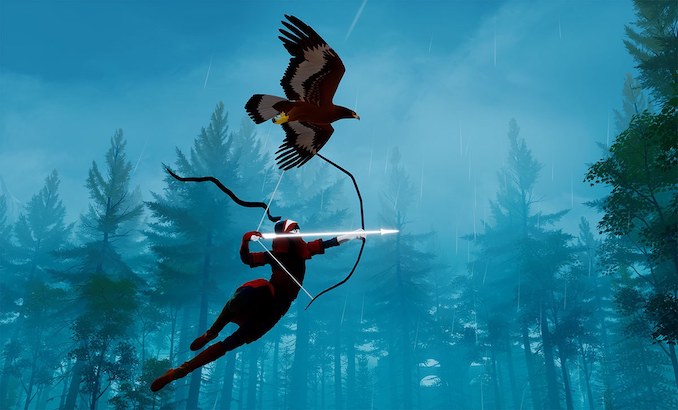 ABZÛ and Journey are absolute masterpieces, and I had high hopes for The Pathless as the sort-of-third in a sort-of-trilogy (ignoring the dreadful microtransaction-heavy iOS title Sky, which is the closest we’ve gotten to an official Journey sequel). But compared to its simple, elegant, predecessors – games that could be picked up, understood, and completed by pretty well anybody – The Pathless feels much more like a “gamer’s game.” The controls are more complex, the puzzles are far more complicated, and the difficult platforming segments make it a chore to explore, rather than the joy that’s so central to the Journey design philosophy.

It’s not that I dislike The Pathless, it’s more that I’m disappointed in it. I’m sorry to see Giant Squid move away from its arthouse roots, and create something more “gamey” and therefore less accessible.

ABZÛ had that moment where a huge blue whale snuck up on you. Journey had a snowy mountaintop that may have brought tears to your eyes (it certainly did mine). The Pathless has a bunch of pressure plates hidden behind some trees in a far corner of the map.

I’m proud to have found those pressure plates – but they didn’t make me cry.

Visit the official page for The Pathless here.

Our review of Call of Duty: Modern Warfare, developed by Infinity Ward. Released on October 25, 2019 for PS4 (reviewed), […]